Governments, organisations and media across the world have been put on alert as whistleblowing site Wikileaks looks set to release millions of diplomantic communications. Emily Butselaar reports

As Wikileaks prepares to expose a huge cache of classified diplomatic communications, the US has warned allies that new revelations may lead to public embarrassment. The cables are expected to expose sensitive foreign policy issues including corruption allegations against foreign governments and leaders, and clandestine US support for terrorism. The leak is expected to contain seven times more data than the infamous Iraq War Diaries released earlier this year.

In what appears to be a harm minimisation strategy the US government has embarked on an impressive briefing campaign, reaching out to allies across the world. 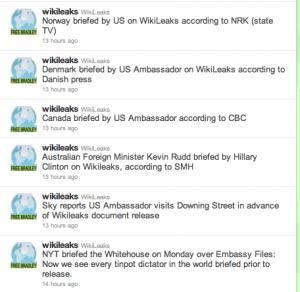 On Wednesday, State Department Spokesman Philip Crowley told AFP that the US was “gearing up for the worst-case scenario, that leaked cables will touch on a wide range of issues and countries” Yesterday in an email briefing Cowley admitted the State Department was practicing due diligence and “assessing the possible impact on our on-going diplomatic activity and notifying both Congress and other governments what may occur”.

The heart of this issue is the right of governments to keep secrets from their citizens. It has been widely acknowledged that the first two document dumps demonstrated overclassification, while the anodyne nature of many of the “secret” documents demonstrates the over-classification of sensitive material. Secrecy rather than transparency is the norm as the US — like most governments — attempts to keep any documents related to defence and diplomacy under wraps. But surely we are willing to acknowledge that our government has to keep secrets when it comes to foreign policy.

In its efforts to “manage” the release and ensure its views are represented in the ensuing debate, the US has been vocal. In an email the Assistant Secretary for Legislative Affairs to the Senate and House Armed Services Committee Elizabeth King said: “State Department cables by their nature contain everyday analysis and candid assessments that any government engages in as part of effective foreign relations…. The publication of this classified information by WikiLeaks is an irresponsible attempt to wreak havoc … It potentially jeopardizes lives.”

And the US ambassador to Baghdad told reporters at an embassy briefing that “WikiLeaks are an absolutely awful impediment to my business, which is to be able to have discussions in confidence with people. I do not understand the motivation for releasing these documents. “They will not help, they will simply hurt our ability to do our work here.”

As news breaks that the UK government has issued a DA notice, effectively asking to be briefed by newspaper editors before any new revelations are published it worth noting that there is no obligation on media to comply. DA-notices point to a set of guidelines, agreed by the government departments and the media. In this case newspaper editors would speak to Defence, Press and Broadcasting Advisory Committee prior to publication.

An interesting element to this story comes with the confirmation that US has also been briefing NGOs, alerting them to programmes that may be compromised in this new document dump.

10 responses to “Wikileaks: UK issues DA-Notice as US briefs allies on fresh leak”