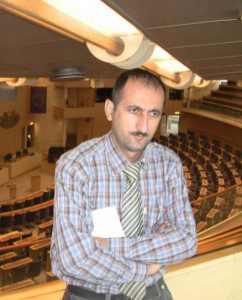 Azerbaijani journalist Idrak Abbasov wins the journalism award, which recognises investigative journalism of dogged determination across a range of media, including print, online, radio and television

First of all, I would like to thank Index on Censorship and all those present. I know that there are many people here today who devote their lives to the struggle for other people’s right to know the truth.

In Azerbaijan, where I have come from, telling the truth can cost a journalist their life. In countries such as Azerbaijan we journalists have to make a choice, and we choose the right to tell the truth.

For this right to tell the truth Elmar Guseinov gave his life in 2005. He knew he would not be forgiven, but he did not stop writing the truth.

I am not complaining. I made a conscious choice when I chose this profession, and I thank fate every day for my work.

Censorship, persecution, limited access to public information, arrests – the situation of the mass media in Azerbaijan is growing worse and their freedom is being curtailed year after year.

At the moment, nine journalists are under arrest on trumped-up charges of possessing drugs or weapons. In Azerbaijan, a request from a deputy of the ruling party is sufficient grounds for arresting the editor of a journal that is criticising the government, even in the absence of evidence. This is what happened to Evez Zeynalli.

In the town of Guba, four journalists were arrested without any charge whatsoever. Human rights activists are convinced that they were arrested for passing on to bloggers a video recording of an event that the censor had not wanted to see publicised.

Khadija Ismayilova, a journalist working for Radio Liberty, was blackmailed in an attempt to force her to stop her investigations into offshore companies owned by the President’s family. In 2009 Radio Liberty, the BBC and Voice of America were banned from local radio stations.