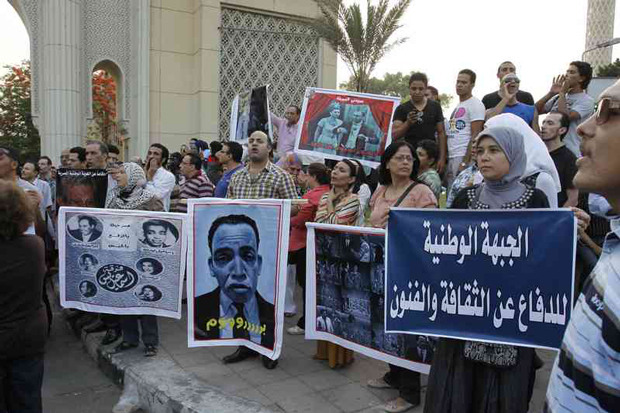 Egyptian intellectuals hold posters and the Tamarod (Rebellion) petitions while chanting slogans during a demonstration against the Minister of Culture Alaa Abdel Aziz, in front of the opera house in Cairo. (Photo: Mohamed Elmaymony / Demotix)

Tensions have been building up in Egypt ahead of mass protests called for by opposition activists on 30 June, the date marking the first anniversary of Islamist President Mohamed Morsi’s inauguration. Shahira Amin reports on the growing concerns for free expression

A sit in by a group of Egyptian filmmakers, writers, performers and intellectuals — which has continued for the past two weeks outside Cairo’s Ministry of Culture — is seen as a prelude to the bigger anti-Muslim Brotherhood protests planned for Sunday. The mass demonstrations are being called for by “Tamarod” (Rebellious), a nationwide campaign launched by members of the opposition Kefaya to collect signatures from Egyptians for a vote of no confidence in the Islamist President. Organizers of the campaign recently announced that they have succeeded in gathering 15 million signatures.

Meanwhile, the arts protesters outside the ministry are demanding the removal of Egypt’s new Islamist minister of culture Alaa Abdel Aziz and protesting what they claim are efforts by the Islamist government to “Ikhwanize” the arts. Ikhwanize is an Arabic word which literally means the appointment of members of the Muslim Brotherhood in key positions in state institutions.

The protesters have been using peaceful means to hammer home their message including poetry recitals, performances and raising placards with anti-Muslim Brotherhood slogans.

Skirmishes broke out briefly last week after the peaceful rally was attacked by Islamist supporters of President Morsi who chanted pro-Muslim Brotherhood slogans and demanded that the minister purge the ministry of old regime remnants. Several protesters were injured in rock throwing incidents and assaults by the Islamist demonstrators before riot police intervened.

The protesters began their sit in after Abdel Aziz dismissed several cultural figures including the directors of the General Egyptian Book Organization, the Cairo Opera House and the National Library and Archives. These firings fueled fears that the expulsions were a first step to stifling artistic expression in the country by placing conservative Islamists at the helm of these institutions.

In a press statement released earlier this month, the Abdel Aziz defended the dismissals as a “campaign against corruption” which he said was a necessary step to purge the ministry of corrupt elements and halt embezzlement of public funds by greedy individuals. The cast of Opera Aida retaliated by appearing on stage with anti-Muslim Bortherhood placards and chants calling for the downfall of the Morsi regime.

The sackings followed controversial statements made earlier this month by conservative Salafist MP Gamal Hamed who criticized ballet as the “art of nudity” during a televised parliamentary session. His statements sparked concerns that ballet performances may be banned under the Islamist government. In recent months, some ultra-conservative Salafis have condemned the display of statues, insisting that depiction of the human body in paintings or sculpture is “frowned upon in Islam.” Such statements have stirred controversy, triggering an outcry by Egyptian liberals and intellectuals who are growing increasingly concerned that the rising wave of conservatism sweeping the country threatens the thousands of statues in museums and historic temples.

“Such statements pose a very real threat tp our ancient heritage as they may incite violent attacks by Islamist zealots on our monuments, “ said Maged Farrag, a liberal collector of royal artifacts.

In a move hailed as a victory by Egypt’s liberals and intellectuals, Mahmoud Abdulla, a controversial Salafi TV preacher who insulted Egyptian actress Elham Shaheen on his TV show on the religious Satellite Channel El Nas, has recently been sentenced to three years in prison and ordered to pay a fine. He had said that Shaheen would “never see the gates of Heaven because of her indecent roles on screen”. He stands to be imprisoned after his appeal was rejected by a court earlier this month.

Egypt’s liberals and intellectuals, however, are becoming increasingly concerned about what they describe as persistent attacks on creativity and artistic expression under Islamist rule. Many of them fear that the Islamist government is determined to alter Egypt’s cultural identity. In a column published earlier this month by state-sponsored Al Ahram, Khaled Fahmy, chairman of the history department at the American University in Cairo, explained that attempts by the Muslim Brotherhood to exercise control over the arts and culture were based on their conviction that Egypt’s identity “had been hijacked by the West and that the time had come for the country to regain its Islamic identity.”

The ministry of culture protesters have turned down an invitation for dialogue extended by President Morsi, who has promised to listen to their demands and concerns. They have vowed not to budge until Abdel Aziz is replaced.

“Egypt is not a privately-owned farm to be divided among the President’s loyalists as reward for their allegiance”, the Freedom of Creativity Front, a coalition of artists supporting the sit-in, said in a statement released earlier this month.

With just days to go before the mass protests demanding the downfall of the President and the Muslim Brotherhood group from which he hails, more opposition activists are joining the ministry of culture sit in on a daily basis.

It appears certain that the ministry building will be one front where the secular-Islamist battle will be fought out.