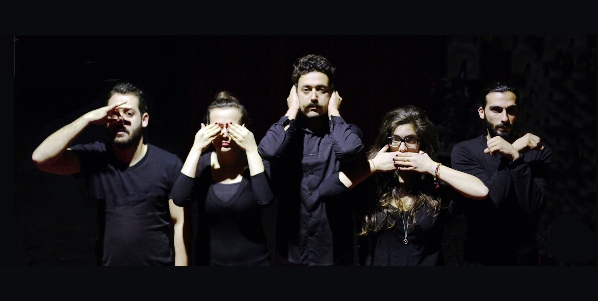 A publicity shot from Lucien Bourjeily’s latest play, Would It Pass Or Not?

Lucien Bourjeily retains a sense of humour. It’s an important attribute for a playwright taking on Lebanon’s censors.

Earlier this year, Bourjeily, an internationally acclaimed writer and director who dazzled the London International Festival of Theatre 2012 with his immersive work 66 Minutes In Damascus, wrote a play about Lebanese censorship. “Would It Pass Or Not?”, produced by anti-censorship group March, addresses the question every Lebanese writer and artists asks themselves before sitting down to begin a work.

Lebanon is a country battling to keep a lid on sectarian tensions, and eternally caught up in other people’s wars. Censorship is seen as a national security issue, and overseen by the army.

Like so many modern blue-pencillers, the Lebanese Censorship Bureau insist that it is only protecting citizens. There is, says Bourjeily, quite a bit of sympathy for this argument in the country.

So Bourjeily decided to tackle the topic head on and write not about the many sensitive issues in Lebanon but about the censors themselves.

Suspecting that the answer to “Would it pass or not?” would be an emphatic “not”, he and his company sought to exploit a loophole, performing their play on university campuses to invited audiences rather than in public theatres. The censors still pursued him.  Two officers from the bureau turned up at a university show and broke up the performance. Bourjeily decided he would try to test the censor’s decision.

In conversation with Index, Bourjeily told of his bizarre encounters with the censor board’s general. He was summoned to the bureau in Beirut on 28 August.

The play cannot go ahead, he was told, because it was not realistic. It was exaggerated.

True, Bourjeily says. It’s fiction. Of course it’s unrealistic and exaggerated. Otherwise it would be a documentary.

The general turns to his subaltern and describes scenes from the play, asking “would such a thing happen here?”, unintentionally and ironically echoing a scene in the play itself.  When censors are censoring a play about censorship, things are bound to turn to farce sooner or later.

Normally, Lebanon’s censors will suggest changes to works that will allow them to pass – a joke removed here, a political remark erased there. But with Bourjeily’s play, this was apparently not going to happen.

The censors’ next move was interesting: they would show, they said, that Boujeily’s play had no artistic merit. On 3 September, General Mounir Akiki appeared on television bearing testimony from four “critics”, each of whom said the same thing; that there was no artistic value in “Would it pass or not?”. Curiously, none of these critics were named, but their views were taken very seriously indeed. One said that Bourjeily’s play were “with a defamatory hallucination indicating the absence of his artistic level”, another that the play “was not related to the theatre, but rather with prosaic words and it does not meet the conditions regarding the structure.”

It’s a familiar ruse; if it’s not art, it’s not artistic censorship; if it’s rubbish, who would want to see it anyway?

In this, the censors echoed the notorious, and in hindsight ridiculous, court hearings over Lady Chatterley’s Lover in Britain in 1960 , the crux of the argument being whether the book was actually literature or mere obscene pornography.  Great lengths were gone to by intellectuals such as Richard Hoggart to prove that Lady Chatterley’s Lover was literature, and thus, perhaps something one might wish your wife or your servants to read, at least if you were an enlightened sort of chap.

This is always what censorship of works of art comes down to: someone, be it the colonels, the Lord Chamberlain or whoever else, is to decide what you can read, what you can write, what ideas you can process. As the late Christopher Hitchens observed in a speech at the University of Toronto in 2006, if given the choice, would you nominate someone for that role? Or would you think you’d take your chances with your own intellect?

Lebanese writers and theatregoers are deprived of that option every day.

This article was originally published on 13 Sept 2013 at indexoncensorship.org