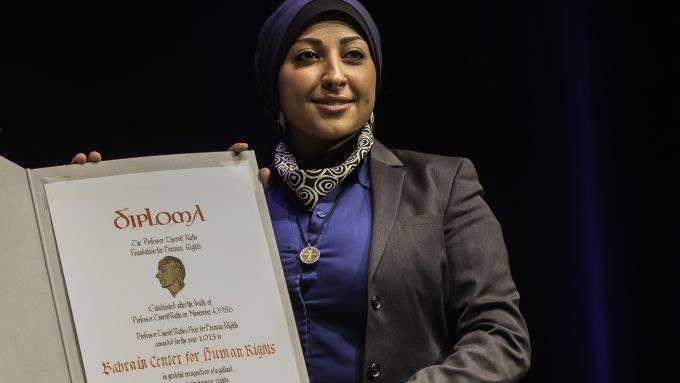 Maryam Alkhawaja accepts the Rafto Prize on behalf of the Bahrain Centre for Human Rights (Image: Lind and Lunde/Rafto Foundation)

The Bahrain Center for Human Rights (BCHR) was awarded the Rafto Prize for human rights at a ceremony in Bergen, Norway last night.

BCHR won for its peaceful fight for fundamental rights of freedom of expression and assembly in the Gulf kingdom, the award committee said.

Acting president of BCHR, Maryam Alkhawaja, was in Bergen to accept the prize. President Nabeel Rajab has been imprisoned since July 2012 for criticising authorities on Twitter. Marayam’s father and sister, Abdulhadi and Zainab, prominent human rights defenders in Bahrain, are also jailed for their opposition to the regime.

“The person who should be on this stage is not me but the people on the streets in Bahrain. They are the unnamed heroes,” Alkhawaja said in her acceptance speech.

She also read out a letter from Rajab: “Brutal violations are still continuing today against peaceful Bahrainis while the whole world continues to stay silent, especially Bahrain’s western allies. Our nation is a victim of being in an oil rich region and a victim of hypocrisies and double standards. Unfortunately, dictators of the gulf region succeeded in silencing governments of the free world in return for shortsighted economic and financial gains. Petrodollars have been able to silence global media and prevent them from revealing our people’s sufferings. We hope that with your support we can overcome this thick barrier as it has become so painful for our people to understand why the whole world deserves freedom and democracy except the small nations of oil rich countries in Gulf.”

The award committee echoed these sentiments: “This is a region where abuses too often are met with silence from western governments. Norwegian authorities have done nothing since expressing concerns in 2011,” said committee leader Martin Paulsen.

BCHR was established in 2002. It has played a vital part in Bahrain’s democracy uprising, now in its fourth year, in the face of the regime’s continued crackdown on opposition. BCHR won Index on Censorship’s Advocacy Award in 2012.

The Rafto Prize is awarded by the Norwegian Rafto Foundation. It is an increasingly influential human rights award, and a number of recipients have later gone on to win the Nobel Peace Prize.