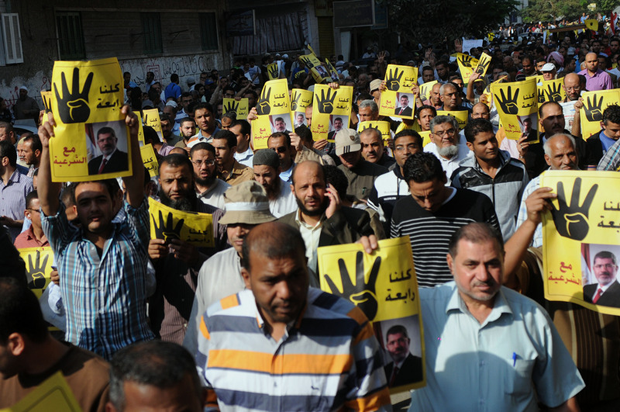 Supporters of Egypt’s ousted President Mohammed Morsi in Helwan District raise his poster and their hands with four raised fingers, which has become a symbol of the Rabaah al-Adawiya mosque. (Nameer Galal / Demotix)

Public service messages on Egyptian radio stations candidly tell listeners that a new constitution currently being drafted by a fifty-member panel “won’t be the best that the country has had”. Listeners are assured however, that the new charter will not be Egypt’s last.

“Regardless of whether you approve or disapprove of the new charter, you must vote in the popular referendum on the document,”exhorts the radio ad. “This will send a message to the world that Egyptians are united.”

The radio spots serve as a warning to the public against raising their expectations too high for the new constitution which –if endorsed in a national referendum slated for January 2014–will replace the country’s first post-revolution constitution drafted under Muslim Brotherhood rule. The 2012 constitution’ crafted by an Islamist-dominated panel was suspended on July 3 — the day Islamist President Mohamed Morsi was toppled by military-backed mass protests. Critics blame the “divisive, Islamist-tinged constitution” for Morsi’s political isolation while he was still in office and say that it ultimately led to his downfall. The 2012 charter– and a decree issued by the now-deposed president giving himself extra-judicial powers –sparked violent protests outside the presidential palace last December in which around a dozen people were killed. The toppled president is now facing trial for allegedly inciting the killing of protesters during what has since come to be known as the “Ittihadeya violence”.

A fifty-member constituent assembly made up mostly of leftists and liberal politicians, who were hand picked by the interim government, is currently working on amending the 2012 disputed charter. The assembly has been given a sixty day mandate, which expires on December 3, to complete the seemingly Herculean task. Democracy advocates had hoped the revised document would be a vast improvement to the one liberals had complained “strengthened the role of Islamic law, gave the military extensive powers and undermined the rights of minorities and women.” But as the deadline draws near for submitting the draft document to interim president Adly Mansour, rights campaigners say their hopes for a more liberal constitution that meets the aspirations of Egypt’s revolutionaries have been all but dashed . They complain that “the draft charter grants the military even greater powers and preserves the Islamic law provisions while also falling short of protecting the rights of women and workers .”

Revolutionary activists are particularly enraged by a provision that would grant the military the power to try civilians in secret military courts. Senior army officials have defended the clause saying it is “necessary in light of the surge in Islamist militant attacks against security and military forces in the Sinai and elsewhere in the country since Morsi’s ouster.” Rights advocates meanwhile argue that such trials are “hasty and are known to deliver disproportionately harsh sentences.” Hassiba Sahraoui , Amnesty International’s Deputy Director for the Middle East and North Africa has denounced Egyptian military tribunals as being “notoriously unfair.” Egyptian journalist Ahmed Abu Draa , the Sinai correspondent for the independent Al Masry El Yom Newspaper was detained by the military last September and faced a military tribunal on charges of “spreading false news about the military”. In a statement calling for his release, Sahraoui reminded Egyptian authorities that “trying civilians in military courts flouts international standards.” She also denounced the decision to try Abu Draa in a military court as “a serious blow to press freedom and human rights in Egypt.” While Abu Draa was handed a six month suspended jail sentence in October,anyone who challenges or “insults the military” risks suffering a similar fate.

While the previous constitution had given the military the discretion to indict civilians for “crimes that harm the armed forces,” the revised document allows the army to indict anyone “for crimes in which officers are involved.” The “No To Military Trials For Civilians group”–a grassroots movement working to end the practice, has in recent days threatened to reject the draft charter if the provision remains unchanged.

“It is clear that the military wants to maintain its privileges including the broad discretion to punish and try people as they choose,” Heba Morayef, Human Rights Watch Egypt Director, told the Washington Post earlier this month.

A brutal security crackdown on members and supporters of the Muslim Brotherhood — including the detention of more than 2000 members of the Islamist group, ill-treatment of political detainees and the killing of around 1000 people since Morsi’s ouster– signals continued impunity for the military and the police in Egypt, Morayef lamented.

Religion has always played an important role in Egypt’s conservative, patriarchal society. Prior to the January 2011 uprising, Egypt could neither be described as a “religious” state nor as a “secular” state (in the Western sense of the word). While the country was not ruled by “religious authority, practically every aspect of Egyptian life was governed by religion. Under Muslim Brotherhood rule, Egypt’s liberals and Christians had feared the country was headed on the path of even greater Islamisation. Morsi’s ouster, however, revived the hopes of some of the revolutionary and liberal groups for the creation of the “secular, civil state” that revolutionary activists had called for during the 2011 mass uprising that toppled former President Hosni Mubarak. It is now almost certain that those groups are headed for disappointment.

Right from the start of the constitution amendment process, it became clear that Article 2 would remain unchallenged. The article –adopted from the two previous constitutions– states that “the principles of Islamic Law (Sharia) are the principle source of legislation in the country” and that “Islam is the religion of the state.” Another provision meanwhile, stipulates that Egyptian Christians and Jews should refer to their own religious laws on personal status issues. Unlike those two provisions which are supported by a majority of the assembly members, Article 219 –which defines Islamic Law based on Sunni Muslim jurisprudence — has been a bone of contention, sparking heated debate among the members. The three Christian members on the panel this week threatened to walk out if the controversial article was not removed. They fear the provision which allows for stricter interpretations of Islam could undermine the rights of Egypt’s minority non-Muslim population (including Christians who make up an estimated 10 to 12 percent of the population). Bassam al-Zarqa, the sole Salafi member on the panel insists however that the provision should remain in the new charter.

Since the military takeover of the country a little over four months ago, Egypt has witnessed a surge in church attacks while hundreds of Christians have been forced to flee their homes in search of less hostile environments.

While the panel has voted separately on each of the amended articles, it has postponed discussions on the contentious issues until the end of the month to allow tensions to ease. It remains to be seen however, whether the wide gap in the members’ perceptions of the role of Islam in the “new Egypt” can be bridged .

Rights advocates have also expressed concern that the draft charter may not match expectations for greater rights for women. Calls by women’s rights groups for restoration of a quota system that would ensure fair representation of women and Christians in parliament have so far fallen on deaf ears. Last Wednesday, dozens of activists staged a protest rally outside the Shura Council headquarters in Cairo demanding the re-introduction of the women’s quota without which they fear women will be grossly under-represented in the next parliament.

“The panel has announced it would retain the obligatory 50 percent parliamentary representation of workers and peasants from earlier constitutions, why then doesn’t it re-introduce the quota system so that women too can guarantee a fairer representation in the People’s Assembly?” asked Mona Qorashy, a feminist who participated in Wednesday’s rally.

Low female representation in parliament and a surge in sexual violence against women have pushed Egypt to the bottom of the Arab region for women’s rights. A recent poll by the Thomson Reuters Foundation on the treatment of women in 22 Arab countries has labelled Egypt “the worst Arab country for women” below Saudi Arabia and Iraq — two countries known to have an exceptionally poor human rights record.

Workers too are unhappy about their rights in the draft constitution. In comments to the semi-official Al Ahram newspaper, Kamal Abbas, a rights activist and Coordinator of the Centre for Trade Union and Workers Services described the draft document as “labour-unfriendly.” He cites Article 14 as one of the reasons for his conviction. “The article states that ‘peaceful industrial actions like strikes and sit-ins are inherent labour rights’ but then goes on to empower legislators to regulate such action,” he complained.

Representatives of the newly formed trade unions are absent from the constituent committee, he lamented, adding that “the sole labour representative on the panel is a member of the government-controlled Egyptian Trade Union Federation–an ardent opponent of the ongoing labour strikes.”

As panel members race against time to meet the December 3 deadline for submitting the draft document to the President , public debates on the document are taking place in parallel outside the confines of the Shura Council premises. Egyptians who have become increasingly politicized since the 2011 uprising, are adamant to take part in the discussions that will shape their future for years to come. “We cannot afford to wait for the referendum to express our views on the constitution. Now is the time to pile pressure on the politicians. After all, it is our destiny –and that of our children– which is at stake,” said Somaya Saeed, a veiled housewife who was at the women’s protest last Wednesday. She pointed to a placard raised by another protester and read the words out loud: “Women are capable of effecting change. Where are the women in the new constitution?” With only five women on the constituent panel, it is not surprising that the rights of women are being overlooked.

This article was originally published on 18 Nov 2013 at indexoncensorship.org