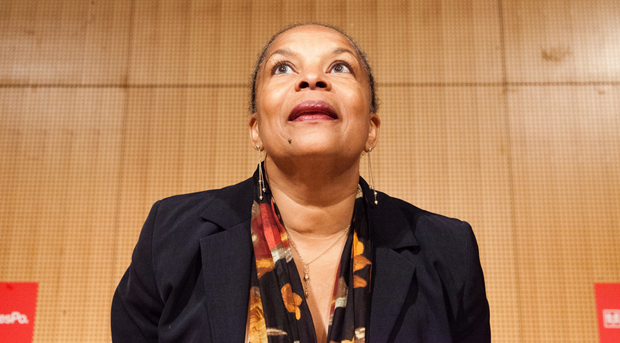 An obscure 16 page-long far-right magazine recently put France’s black justice minister Christiane Taubira on its cover, comparing her to a monkey. The storm of indignation that followed gave unexpected visibility to the magazine and members of the government expressed their desire to sue the magazine or to block the distribution of the infamous issue. Was this an attack on the freedom of the press? Or rather, an occasion for French politicians to look good and to make everyone forget about their own track record?

“Crafty as a monkey, Taubira gets her banana back”, said Minute’s cover, next to a photo of Taubira looking unhappy. The title used a common French phrase (“avoir la banane” means “to be in good form” in French).

Following the outrage caused by this cover, Jean-Marc Ayrault, France’s prime minister, asked prosecutors to investigate whether any law had been broken. The prosecutors decided it had and opened an investigation for “injure publique à caractère racial” (racist public slur). The interior minister, Manuel Valls, announced he was examining whether it was legally possible to block the distribution of the magazine. This, however, has not been followed by any measures.

Taubira, 61, was born in French Guyana, where she started her political career as a supporter of independence for the ex-colony. She has been the driving force behind the 2001 law that recognises the Atlantic trade and slavery as a crime against humanity and a strong advocate of the law  allowing same-sex marriage passed this year.

As such, she has suffered an escalation of racist abuse from the opponents to same sex-marriage. Last month, Anne-Sophie Leclere, a Front National municipal election candidate, was dismissed by her party after comparing Taubira to a monkey on her Facebook page and on TV. “I prefer to see her swinging from the branches of a tree than in the governement”, she told a reporter. The FN subsequently sued Taubira for having insulted the party.

During a recent visit to Angers, the minister faced kids from the “Manif pour tous” waving a banana at her and chanting: “Who’s the banana for? For the monkey!” The abuse is reminiscent to what Cécile Kyenge, minister of integration in the current Italian governement, has been facing in Italy and rife with references to colonisation: In an October demonstration of the extremist Catholic Civitas Institute, a priest was heard shouting: “Y’a bon Banania, y’a pas bon Taubira” – a reference to the old advert for Banania chocolate powder which featured a Senegalese infantry man speaking in pidgin French, an advert which is seen as a symbol of French colonialism.

Minute’s words “deny that I belong to the human race”, said Taubira, who refused to prosecute the magazine.

Created by supporters of French colonisation in Algeria in 1962, Minute backed the Front National party in the 1970’s and has been struggling over the past years. Its publishing company went into administration last March and the magazine currently counts only three employees. For the magazine, the infamous front page has been a success: “We wanted free publicity. We got more than we could have dreamed of”, said one of their journalists. Hélène Valette, spokeperson for Minute added: “We take responsibility for this cover. It’s satirical. No one takes offense at the covers of Charlie Hebdo.”

Satirical publication Charlie Hebdo responded to this statement saying:  “Some people have actually taken offense at the covers of Charlie Hebdo, among which the Catholic far-right which has sued us 12 times in 20 years (…) Minute does not defend the freedom of the press. It prepares the ground for future racist crimes.”

The law against racist public slur was added in 1972 to the 1881 Law on Press Freedom. France has some of the toughest hate speech laws in the EU. Minute’s editor is risking up to six months in jail and a 22,500 euros fee.

For French politicians and for the press, the racist abuse against Taubira has actually provided an occasion to express unanimous indignation and to push under the carpet their own recourse to racist rhetorics. As Julien Salingue wrote in Acrimed (an independent organisation criticising the media) some of the media coverage of the abuse looked like an investigation led by suspects. “Has France become racist?” recently asked the Parisien newspaper on its front page, forgetting previous covers demonising migrants. The pattern was shared by Le Point and L’Express magazines, known for their sensationalistic Islamophobic covers.

At the launch of the Front National municipal campaign, a journalist from France Inter radio deemed fit to give a platform to 85 year-old Jean-Marie Le Pen and ask him for his opinion of Christiane Taubira. Always predictable, Le Pen said that because Taubira had been independentist she was against France and had been chosen because the colour of her skin could serve as a shield when proposing unacceptable laws.

Interior minister Manuel Valls has used the attacks on Taubira to his political advantage and has been very prompt in saying he wanted to ban the circulation of Minute – which seemed at best useless, as the damage had been done, at worst, counterproductive:  it would insure more publicity for Minute and allow the publication to portray itself as a defendant of the freedom of the press. Valls happens to be well-known for its anti-immigrants and anti-Roma policies and rhetorics. France’s national union for undocumented migrants, which is planning a protest in front of the Parti Socialiste headquarters on 27 November, argues that “the liberation of racist speech is a result of the policy of successive governments which have agreed to the idea that “immigration is a problem” and stigmatised Roma people, Muslims and all foreigners, especially undocumented people.”

Henri Maler, one of Acrimed founders, tweeted: “Fighting racism exclusively by outraged declarations and legal action = emptying the ocean with a tea spoon.”

This article was originally posted on 25 Nov 2013 at indexoncensorship.org