An Angolan teen has been detained for almost two months for "insulting the President" via t-shirts. This is not the only time and place tees have landed someone in serious trouble 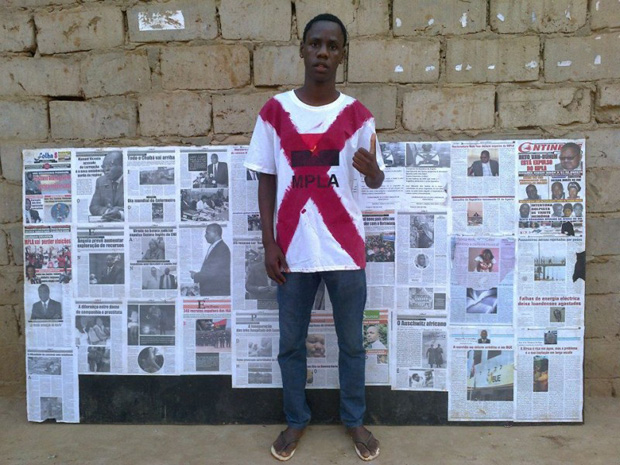 Angolan 17-year-old Manuel Chivonde Nito Alves went on hunger strike on Tuesday, following his arrest on 12 September for printing t-shirts with the slogan “Out Disgusting Dictator”. The message was aimed at the country’s President Jose Eduardo dos Santos, who has held power in since 1979. The shirts were to be worn at a demonstration in the capital Luanda, highlighting corruption, forced evictions, police violence and lack of social justice under dos Santos’ regime. Nito Alves has been charged with “insulting the president”, and has now spent almost two months in detention – parts of it in solitary confinement. His family were barred from seeing him, and three weeks went by before he was allowed to speak to a lawyer. The hunger strike is in protest at his “unjust and inhumane treatment”. 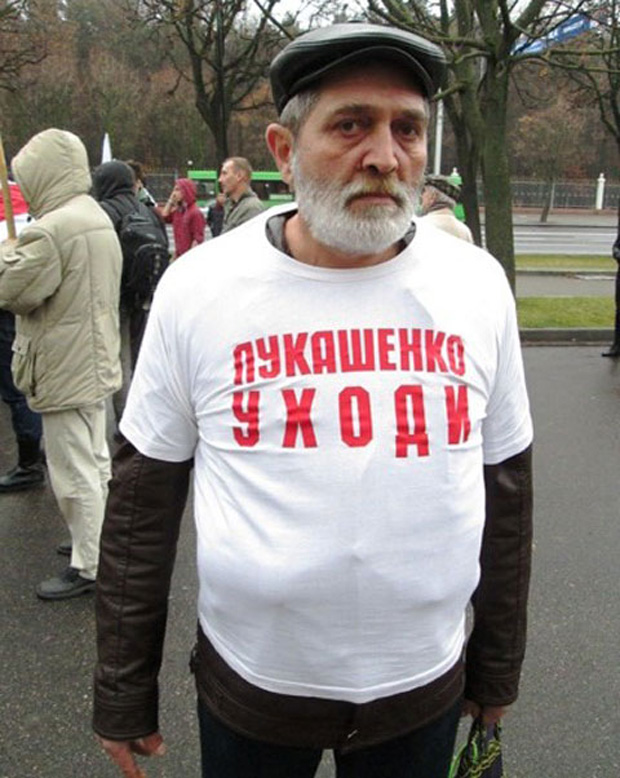 On Monday, Belarusian opposition activist Yury Rubstow was sentenced to three days in jail for wearing a t-shirt with the slogan “Lukashenko, go away” on the front, and “A four-time president? No. This is not a president but an impostor tsar” on the back.” The message was aimed at the country’s dictator Alexander Lukashenko, during an opposition protest march. He was found guilty of disobedience to police officers under Article 23.4 of the Civil Offenses Code.

In 2010, Sipho Jele, a member of Swaziland’s People’s United Democratic Movement, was arrested for wearing a t-shirt supporting the party during a May Day parade. He was arrested under the country’s Suppression of Terrorism Act, and died in custody. The police said he had hanged himself, while the party say the police of killed him. 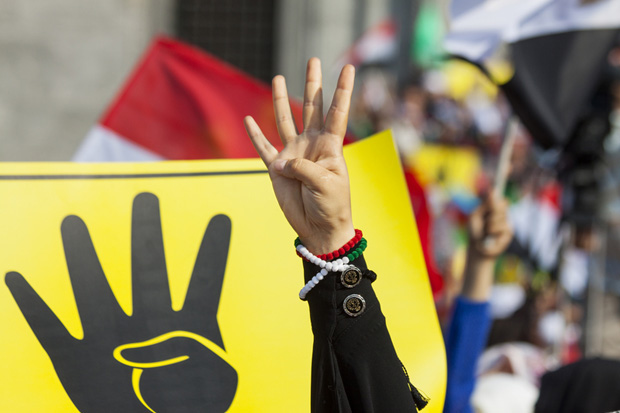 In September, three Egyptian men were arrested for wearing t-shirts emblazoned with the Rabaa symbol. A hand holding up four fingers, it is widely used by those opposing Egypt’s interim military-backed government, and the coup that ushered in in. Mohamed Youssef, the country’s kung fu champion, was also suspended by the national federation for wearing a similar t-shirt during a medal ceremony. 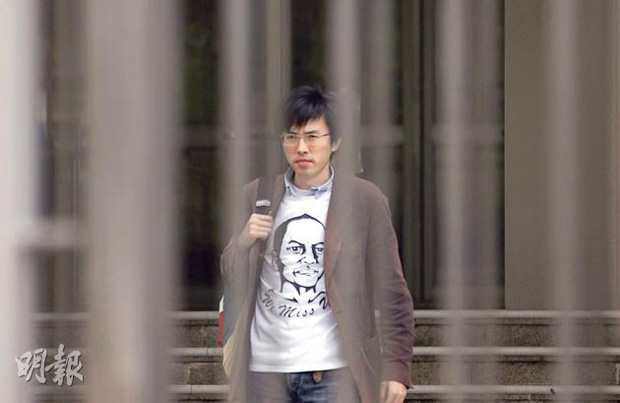 An activist from Hong Kong was arrested last December for throwing a t-shirt at former Chinese president Hu Jintao during an official visit almost six month earlier, on 1 July. League of Social Democrats Vice Chairman Avery Ng threw a t-shirt with a drawing of the late Chinese dissident Li Wangyang, a Tiananmen Square activist who died under suspicious circumstances only weeks before the visit. Ng was charged “with nuisance crimes committed in a public place”. 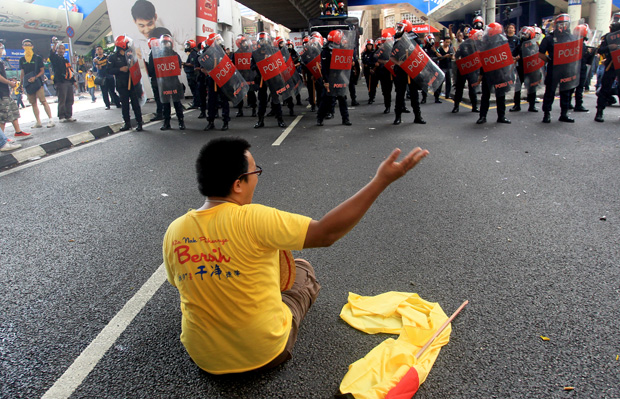 In June 2011, Malaysian police arrested 14 opposition activists for wearing t-shirts promoting a rally in Kuala Lumpur calling for election reform. The shirts carried the slogan “bersih” which means “clean”, and is the name of one of the groups behind the protest. Authorities claimed the demonstration was an “attempt to create chaos on the streets and undermine the government”, and they were therefore within their rights to arrest the protesters. They also confiscated t-shirts from the group’s headquarters. 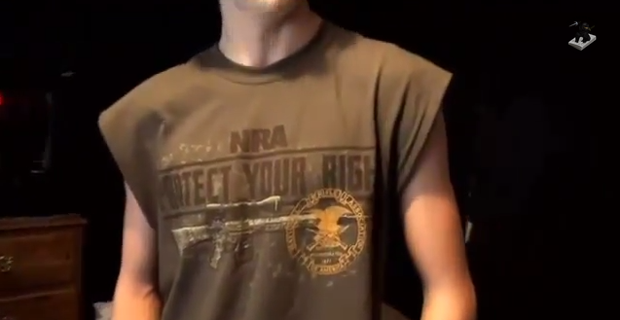 A 14-year-old student from West Virginia was in April suspended from school and subsequently arrested for refusing to remove a t-shirt supporting the pro-gun National Rifle Association. Jared Marcum was charged with “obstructing an officer” and faced a $500 fine and up to one year in prison.

On the flip side, a Tennessee man was arrested for wearing a t-shirt in support of stricter gun control laws. Stanley Bryce Myszka was wearing a shirt that read “Has your gun killed a kindergartener today?” at a shopping centre, following the shooting at Sandy Hook Elementary School. He was approached by security guards, who called the police when he when he refused to remove the shirt. He was also banned from the shopping centre for life. 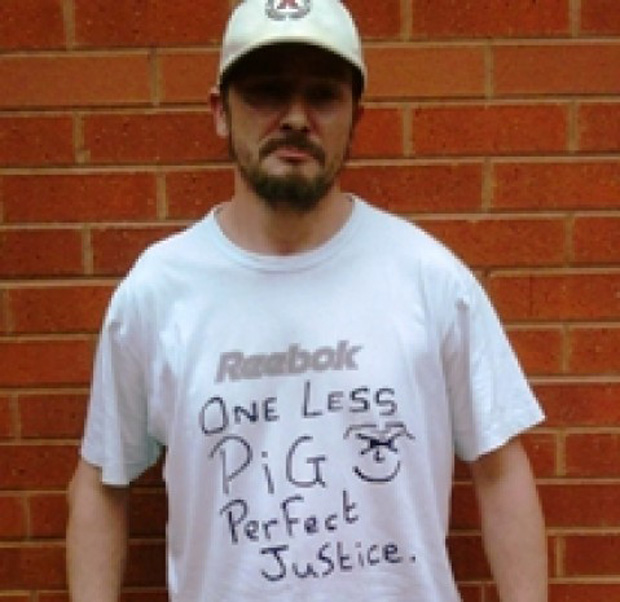 A Manchester man was in October 2012 sentenced to eight months in prison in part for wearing a t-shirt emblazoned with offensive comments referencing the murders of two policewomen. Barry Thew had written “One less pig; perfect justice” on the front of his t-shirt and “killacopforfun.com haha” on the back. While four months of the sentence was handed down for breach of a previous suspended sentence, he was charged on a Section 4A Public Order Offence for the t-shirt incident.