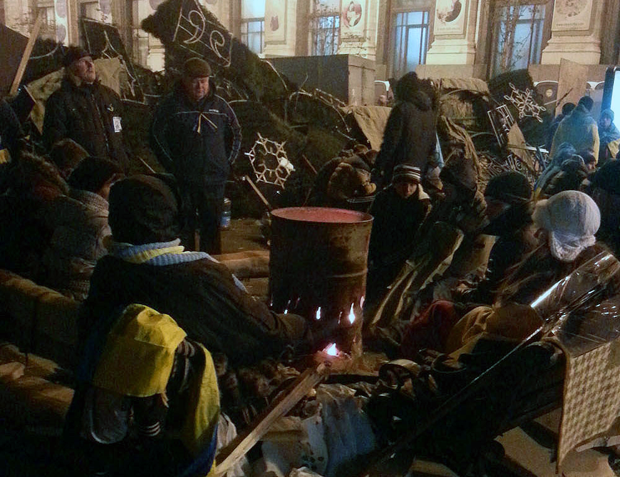 Protesters gather in Maidan Nezalezhnosti to register their disapproval of the government’s refusal to sign an association agreement with the European Union and its violent crackdown on peaceful demostrators. (Photo: Andrei Alaiksandrau / Index on Censorship)

Maidan Nezalezhnosti, the Independence Square in the centre of Kiev, leaves mixed impressions of courage and uncertainty. It has become a symbol of determination among ordinary Ukrainians to push for their rights and freedoms – but after the events of the last weekend it has also turned into a powerful reminder of how difficult and even bloody the fight can be.

Mass actions in Ukraine started on 21 November after it became clear that the country’s leaders were not going to sign a much anticipated association agreement with the European Union. The situation escalated after 29 November, when it was confirmed the agreement was not signed during the Eastern Partnership summit in Vilnius. Around 4 a.m. on 30 November riot police violently dispersed protesters from the Independence Square. Dozens of peaceful protesters and journalists were injured. The next day saw one of the largest mass street rallies in Ukrainian history, at least 200,000 people protested against the violent actions of the police. New clashes occurred; protesters and opposition parties called for the government to resign, but the vote of no confidence in the parliament failed. At the moment nobody has a clear answer what comes next.

There are a lot of young people among the protesters. Yuliya, a student of one of Kiev universities, says they are there to “defend their future.” “We want to live in a European country, and feel we are citizens that enjoy rights and freedoms,” she says. Several students said officials at their universities “promised troubles” to those who joined the protests. Some of the student demonstrators told Index that they were threatened with expulsion – but came out into the streets anyway.

Andrii is an employee of an IT firm from Lviv, a regional centres in western Ukraine. He and his friends traveled to Kiev to join the protest for several days during the last two weeks, despite the fact it is more than 500 km drive each way. “It is a crucial time for my country; I cannot just stay home when the fate of my nation is decided. The association agreement with the EU is a historical chance for Ukraine, the chance not to be missed,” he says.

“I went to Maidan, because I want to live in a European country; I want to walk even pavements, drive quality roads, enjoy quality public services for the high taxes I pay – and I don’t want to see my taxes go to pockets of president Yanukovich and his family. Directives of the EU establish quite high requirements for fighting corruption, this is why I support association with the European Union,” says Khrystyna, a lawyer from Kiev.

Roman Romanov, an expert on freedom of assembly with the International Renaissance Foundation, says he has never seen so many people in the streets of Ukraine.

“Now it is not only people who want the association agreement with the EU to be signed. People raise their voice against the police state and brutality against peaceful protesters; they understand that without them speaking out the rule of law will not be restored and justice will not be done,” Roman Romanov says.

Oksana Romaniuk, an executive director of the Institute of Mass Information, a Kiev-based freedom of expression organisation, also sees the difference in how society treats journalists.

“Fifty-one journalists were beaten by riot police in Ukraine between 29 November and 2 December. On the night of 30 November officers of Berkut, a riot police special force, specifically targeted journalists when they were dispersing the protest from the Independence Square. Now local businessmen offer their help to us – they buy first aid kits for journalists and offer money to cover medical treatment for injured reporters. And ordinary people suggest their help, too. I was really moved when a woman came up to me in a bus, as she heard I was ordering protecting helmets and vets for journalists. The lady gave me 200 hryvnias (around £15) and said ‘I have heard how journalists were beaten – please, take this money to help them’. I hope these are the signs that show society understands the importance of journalists’ work to inform people,” Oksana Romaniuk says.

“I did not know I live in a country where a bloody dispersal of a peaceful meeting can happen, where such inhuman brutality against unarmed people and journalists is possible. It is a disgrace for Ukrainian authorities,” she adds.

State officials of Ukraine promise they will make up for this “disgrace” and investigate the violent actions of the police. At the same time, president Yanukovich left for an official visit to China, despite the serious political crisis his country is in. The OSCE Parallel Civil Society conference called the situation in Ukraine “a human dimension crisis.”

“It looks like the authorities want to show they do not care about people that stay at Maidan. It is difficult to say what is going to happen next. I could not believe that happened in my country. Now I don’t see how this crisis is going to be resolved,” says an employee of a Kiev-based human rights organisation.

Last night it was peaceful at Maidan Nezalezhnosti. There was a concert with Ukrainian patriotic songs. People were sitting around fires in barrels; a dozen youngsters decided to warm themselves by playing football just beside a barricade. No police were seen anywhere.

“Would you like a cup of tea?” asked a young Ukrainian girl with a warm smile – she is just walking around Maidan with her boyfriend and a big thermos and offers a free hot drink she made at home to people who came out in a cold night to tell their government they choose a European future for their country. Will they be heard, remains a question.

This article was posted on 4 Dec 2013 at indexoncensorship.org