NEWS
Baku magazine and the tale of two Azerbaijans 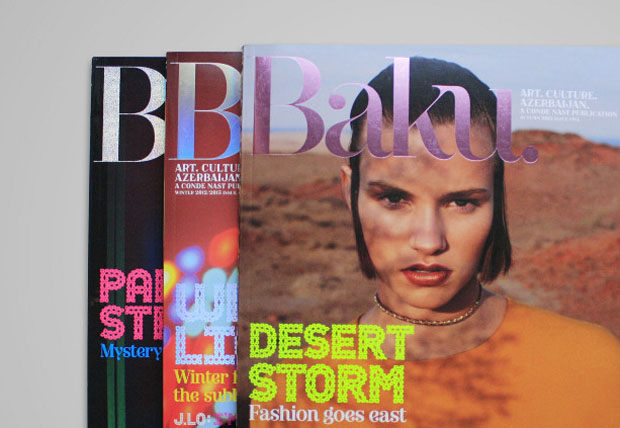 The contrast is stark. On one hand, you’ve got Azadliq — Azerbaijan’s leading independent newspaper — balancing on the brink of bankruptcy. Known for its critical coverage of the country’s repressive regime, led by President Ilham Aliyev (in a role he essentially inherited from his father Heydar), the paper has been under continuous economic attacks by the government. Defamation cases and payments being held back, among others things, have left the paper in serious danger of folding.

On the other hand, there’s Baku — the art and culture magazine with an Azerbaijani twist, brainchild of Aliyev’s daughter Leyla and co-published by Conde Nast —  which recently celebrated its second birthday. A magazine so expensively produced it has its own special font probably doesn’t need to concern itself too much with sales figures and turnover.

The birthday bash was held at “vibrant Baku night spot Pacifico”, where “the champagne flowed and the band played into the night” and guests “toasted the title’s success”. I know this because I recently got my hands on issue 10 of the magazine, which hit the newsstands last week. The party was heavily featured in the society section, which also included appearances by Leyla herself, her sister Arzu and mother and First Lady Mehriban.

Somewhat ironically, I found a stack at an Index event exhibiting the work of Azerbaijani photographers capturing some of the country’s many protests.  They were probably kindly donated by the representatives from the Azerbaijani embassy, who popped along to the event.

At first glance, Baku magazine seems like your typical glossy, upmarket mag, promoting the sort of grossly decadent lifestyle most of us would never come within a gold cobbled country mile of. However, it doesn’t take many page turns to sense that something is a bit off.

One of the first things that hits you is the near-obsession between creating links between Azerbaijan and the most glamorous, posh and high-culture aspects of western countries. “Walking along the Boulevard, the wide, tree-lined esplanade that sweeps the length of Baku’s Caspian seafront, is probably quite similar to walking along the Promenade des Anglais in Nice, during the cooler months,” coos Leyla Aliyeva, who also holds the role of Editor-in-Chief, in her Editor’s letter. There is also the feature on the country’s new ski resort, Shahdag. “Sure, it’s not Les Trois Vallees”, the article says. But you can still tuck into Tskian, “the Azerbaijani equivalent of a French alpine tartiflette”. While it is far from the only country to indulge in a bit of self-promotion, the idea of selling Azerbaijan as a modern, glamorous it-spot, seems to permeate the whole publication to a slightly comical extent. But considering they have in the past hired western PR companies to help polish the country’s international image, I guess this is to be expected.

It is further reflected in the editorial staff, filled with Darrens, Marias, Carolines and Simons. For a magazine about Azerbaijan, it doesn’t seem to have many actual Azerbaijanis working for it. Granted, supply might be a bit sparse, as there are a number of journalists among the country’s (at least) 142 political prisoners. Perhaps potential employees are afraid of being blackmailed, like investigative journalist Khadija Ismayilova? Or brutally attacked, like reporter Idrak Abbasov? Or maybe it’s because most of Azerbaijan’s media is otherwise engaged in state-controlled media?

Anyway, it is not surprising that a magazine called Baku, whose USP is Azerbaijan, focuses on all things, well, Azerbaijan. Some tenuous links are drawn, like the article suggesting that jewellery designer to the stars Loree Rodkin’s new collection will be inspired by Azerbaijan, essentially based on nice things she said at an exhibition in Baku. The interview with musical prodigy Nazrin Rashidova, who was born in the country, is only really jarring if you know that musicians, like Jamal Ali, who have dared criticise President Aliyev have allegedly been tortured by the police.

However, there are sections that seem to leave all pretence at the door, and go full on into that strange subtle-yet-obvious mode of PR-managed propaganda. The eight-page ode to Baku’s controversial beautification and modernisation project, under the guise of an interview with designer behind much of it, is issue 10’s most striking example. In fawning terms, it discusses the type of urban renewal that saw houses demolished and families evicted in the lead-up to the Eurovision Song Contest, hosted in the capital in 2012. We also get previews of yet-to-be unveiled treats. The Port Baku development, opening this spring, “is set to become the city’s premier luxury address” with “flagship stores from the world’s leading fashion brands” and exclusive apartments with “access to a 3000sq m leisure club and spa”. There are also plans to transform “a former power station complex into three destination restaurants and a nightclub.” And it goes on and on. A separate article announces the opening of the Fairmont hotel in one of the city’s Flame Towers. The 36-floor hotel will boast “Baku’s first French Bistro”.

It’s a dedicated effort to shift international attention away from corruption, poverty and the continuing attacks on human rights. But while this attempt to paint Azerbaijan as a harmonious and modern hot-spot might work for some, juxtaposed against the actual goings-on in the country, Baku magazine also manages to highlight the vast gulf between the life the regime and its elite circles lead, and the struggle of those fighting for democracy. In some ways, it is a very tangible symbol of the two Azerbaijans.

To buy a copy of the autumn issue of Index on Censorship, featuring work by some of Azerbaijan’s most brave photojournalists, click here.

This article was published on 20 Dec, 2013 at indexoncensorship.org