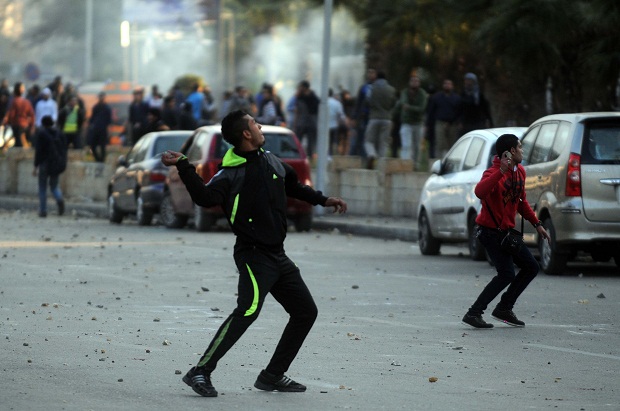 Egyptians head to polling stations on Tuesday to vote on a revised constitution heralded by Egypt’s military-backed government as a” first step in the country’s democratic transition” and billed as a blueprint for the “new Egypt.”

The amended document has also been hailed by analysts as one that “enshrines personal and political rights in stronger language than in previous constitutions.” Rights advocates however, have expressed fears that the enormous powers and privileges the ‘new’ charter grants the military could undermine those rights, rendering them meaningless .

The public is being reassured that the revised charter is “a vast improvement to the 2012 Muslim Brotherhood constitution” that was scrapped when the Islamist former President Mohamed Morsi was toppled by military-backed protests in July. In an Op-Ed published in the New York Times last week, Amr Moussa, a former Foreign Minister under deposed President Hosni Mubarak and the Head of the 50-member committee that amended the 2012 Constitution, said that the document –in its new form– “meets the needs and aspirations of all Egyptians” unlike the previous charter which he said, “had been rushed through by a single dominating political faction and answered only to its priorities”.

Ads in the local media and on billboards across the country promote a ‘yes’ vote on the charter, portraying its ratification as a ‘patriotic’ act. Public service messages broadcast on radio and TV stations tell Egyptians that even if they disagree with some of its provisions, the charter is “not permanent—Egypt is.” A ‘yes” vote will “complete the unfinished revolution Egyptians began on June 30,” intones the broadcaster in reference to the day millions took to the streets demanding the downfall of the Islamist regime.

The new charter grants Egyptians greater freedom of expression and belief and ensures equality between men and women. The provision on women’s rights says the state must take necessary measures to guarantee women have proper representation in legislative councils, hold senior public and administrative posts, and are appointed to judicial institutions. It obligates the state to provide protection to women against any form of violence. Meanwhile, articles that gave the previous constitution an “Islamist flair” have either been removed or replaced by others that limit the scope of Islamic law or Shariah. The charter also reaffirms the country’s commitment to its obligations under all previously signed international treaties and agreements including human rights covenants. It also empowers lawmakers to remove the president with a two-thirds majority, obliges the president to declare his financial assets and bans political parties founded on religion, sect or region. All of the above signal victory for Egypt’s liberals and rights advocates who had been vocal in their concerns about flaws in the previous constitution including provisions on religious freedoms and other liberties and rights of women and minorities.

But skeptics caution it may be too early to rejoice.

While some analysts hail a provision banning the prosecution of journalists for ‘publication offences’ as one that will “reinforce press freedom,” a widening government crackdown on critical voices in recent weeks has dashed hopes for greater freedom of expression. Secular revolutionary activists, bloggers and journalists have been targeted along with thousands of Brotherhood supporters and sympathizers, the majority of whom have been imprisoned on trumped up political charges. Four prominent activists (including iconic symbols of the 2011 Revolution Alaa Abdel Fattah and Ahmed Maher) languish behind bars for “taking part in unauthorized protests.” Meanwhile, three journalists working for the Al Jazeera English service remain in custody pending investigations on charges of ‘spreading lies and belonging to a terrorist cell.”

Another provision banning the closure of media outlets for what they broadcast or publish would have been plausible had it come before all channels linked to the Muslim Brotherhood were shut down in the wake of the military takeover of the country in July.

Critics meanwhile, cynically dismiss the provision giving citizens the right to freedom of assembly and demonstrations. They argue that a controversial new law criminalizing protests without prior permission from the authorities nullifies the provision.

And while the revised charter says freedom of belief is “absolute’–whereas the previous charter said it was “protected’– the freedom to practice religion and to establish places of worship is restricted to believers in the three “divine faiths’: Christianity, Islam and Judaism. This leaves the country’s Baha’is –who have long suffered discrimination –without protection or rights and may subject them to further persecution. Shia Muslims too face harassment in Egypt, according to the US State Department’s religious freedom 2012 report. Persistent hate speech culminated in the lynching of four Shias by a mob of ultraconservative Salafis in the village of Abu Musallim in Greater Cairo in June Earlier this month, a group of Canadian Shia pilgrims were barred entry into the country and were turned back by security officials.

But the biggest disappointment for secular activists and pro-democracy groups has been the retention of disputed provisions giving the military special privileges and allowing the continuation of military trials for civilians. Article 204 says that “civilians can be tried by military judges for attacks on armed forces, military installations, and military personnel.” Critics fear the provision could be applied to protesters, journalists and dissidents. For the next two presidential terms, the armed forces will also have the right to name the defense minister — an arrangement that positions the military as the main power broker, giving it autonomy above any civilian oversight. Moreover, the charter fails to ensure transparency for the armed forces’ budget allowing it to remain beyond civilian scrutiny.

“Failure of the charter to curb the military’s privileges paves the way for a bigger role for the army in becoming the main power broker,” said Hossam el-Hamalawy, a journalist and member of the Revolutionary Socialists Movement which played a key role in the 2011 mass uprising that toppled President Hosni Mubarak.

Despite its shortcomings, the charter is widely expected to be endorsed in the upcoming referendum. The majority of non-Islamists — a term often used to refer to Egypt’s leftists, liberals and Christians — are likely to approve the new charter simply because they yearn for a return to the stability and security they once enjoyed under authoritarian President Hosni Mubarak. An economic recession and rising unemployment have taken their toll on weary Egyptians whose livelihoods have been disrupted by the work stoppages and ongoing street protests. The economy had been on the brink of collapse before Saudi Arabia and other oil-rich Gulf states offered Egypt a multi-billion dollar rescue package to shore it up.

Analysts say the “yes” vote will not be an endorsement of the charter per se but rather, a nod of approval for the return of the military to power. They say the constitution will pass as an endorsement of Defense Minister General Abdel Fattah El Sissi, the country’s de facto ruler, who on Saturday confirmed he would run in the country’s next presidential elections “if the army gives me a mandate and if the people of Egypt ask me to do so”. General Sissi is idolized by millions of Egyptians who see him as the “saviour of the Revolution” despite the repressive measures used by the military to silence dissent since Morsi’s ouster.

Meanwhile, supporters of the ousted Islamist president have vowed to boycott what they call the “military” vote and are urging others to do likewise. Sheikh Youssef Qaradawi, a prominent Qatari-based Muslim Brotherhood cleric — who faces trial in absentia after the interim government branded him a ‘terrorist’ — has issued a religious edict or “fatwa” prohibiting Egyptians from voting in the referendum.

Some political groups have also declared their intention to boycott the vote while others have announced their outright rejection of the charter. The Strong Egypt Party, established in 2012 by former Brotherhood member Abdel Moneim Aboul Fottouh has said it opposes the constitution on grounds that “it fails to promote social justice and gives too much power to the President.” Four of the party’s members were arrested last week in Cairo for hanging up posters promoting a “no” vote. The April Six Movement — one of two main groups that organized and planned the mass protests that led to Hosni Mubarak’s overthrow — has also announced it would stay away from the ballot box, citing “the violent crackdown on Islamist protesters” as a reason. Other revolutionary groups like the Third Square — a loose coalition of leftists, liberals and moderate Islamists opposing both the military and the Muslim Brotherhood — have also said they would refrain from voting.

The enthusiasm and vigour that characterized the polls held after Mubarak’s overthrow have been replaced by disengagement and the mood of apathy that prevailed during the autocratic era of Hosni Mubarak. When asked if they will vote in the referendum, many ordinary Egyptians will answer, “What constitution? We want food for our children.” Many of them say they will not stand in line and wait for hours as they did in previous polls held during the last three years.

“I voted for Morsi in the last presidential election,” Mohamed Abdalla, a bearded taxi driver said. “What good did that do? Where is my vote now?”

This article was posted on 13 Jan 2014 at indexoncensorship.org