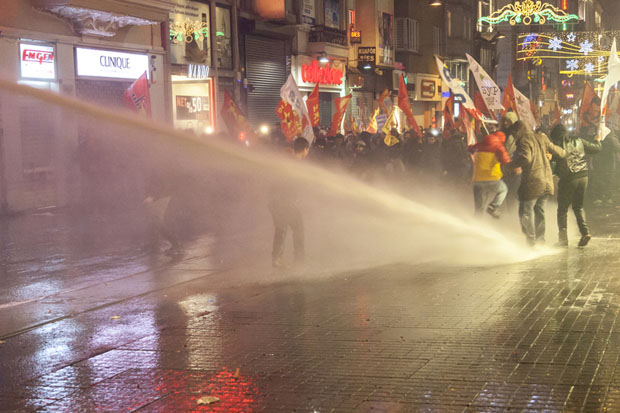 Riot police in Istanbul use water cannons on protesters against the amendments to internet law 5651 (Image: Bulent Selcuk/Demotix)

The specifics regarding website censorship and data gathering in the controversial, recently approved amendments to Turkey’s internet law remain murky. The updated bill 5651, which adds restrictions on internet users’ freedom of expression, and now only hinges on President Abdullah Gül signing it into effect, has been widely criticised.

Opponents protesting the amendments this past Saturday in Istanbul were met with water cannons and tear gas, mirroring a similar police reaction to anti-censorship demonstrations in mid-January. The changes to the law were first proposed last December, just one day after the unraveling of an ongoing corruption scandal that has embroiled Prime Minister Recep Tayyip Erdoğan and his AK Party. Opponents say increased censorship aims to harness criticism of government and prevent the spread of leaked recordings about corruption. The Republican People’s Party (CHP), Turkey’s leading opposition party, published a report warning that the new powers given to the Directorate of Telecommunication (TİB) to decide on website bans would allow the government to block and censor websites at will. “Possession of such authoritarian power doesn’t exist in democratic countries,” it says.  “It’s a very familiar pattern to us of putting law through very fast without consultation, without enough expert opinion, without enough consideration,” said Emma Sinclair-Webb, a senior researcher on Turkey at Human Rights Watch.

The amendments mean judicial orders are no longer necessary for a ban to be carried out. TİB can ban websites within hours and without giving notice, which could mask the censorship to internet users. Furthermore, websites can be blocked based on URL addresses. Because this would allow offensive content on a website to be blocked while its other pages remain active, supporters of the law claim that URL-based bans are a liberal alternative to larger scale censorship.

However, the move to URL-based website blocking may further threaten media in Turkey, says Elif Akgül, freedom of expression editor for the independent news website Bianet. A number of mainstream Turkish news outlets owned by conglomerates close to the government have notably been affected by censorship in recent years. Although also subject to website blocking, smaller, independent news platforms have often been swayed less by direct government pressure. “If you’re a journalist and work in mainstream media, if you can’t publish something, you can publish it on a blog so people can read it,” Akgül said. With URL-based website bans that go into effect without any notification, alternative sources for information, like blog posts or articles on independent news sites like Bianet, may disappear suddenly if they’re considered offensive.

When leaked recordings led to Vimeo and SoundCloud being shut down temporarily in January, a court order was displayed on the sites. Most recently, a string of wiretapped phone conversations implicating corrupt business agreements and government meddling in mainstream media have surfaced on websites like SoundCloud, Vimeo and YouTube and spread through social media before the sites could be shut down. URL-based blocking may see recordings like these disappear, with no explanatory court order left in its place. Critics see the timing of the approved amendments amidst these leaks as motivated by the present government’s interest in controlling information in an election year. “Against the background of these phone calls, telling the press what to do, we’re seeing a very interventionist government that wants to control the masses,” said Sinclair-Webb.

Critics of the law say the use of deep package inspection to collect data will make internet users vulnerable to surveillance. For journalists, especially those working on topics the government may see as threatening, increased surveillance means they have to protect their own internet activity and communication with sources to avoid legal threats, says Akgül. “It’s going to be more difficult for us as journalists because our internet activity is going to be more dangerous to ourselves, to our sources. We have to find more secret ways,” she said.