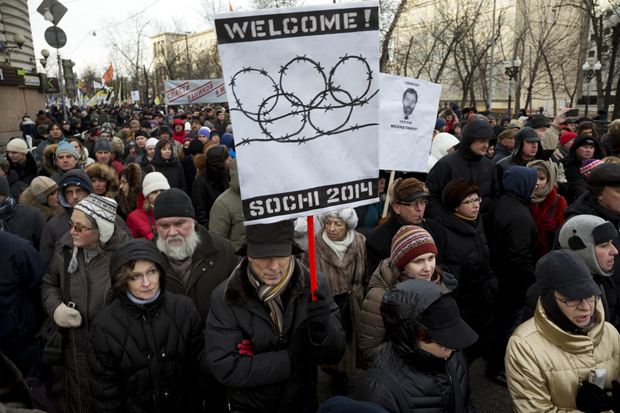 Several thousand protesters marched through central Moscow on 2 February 2014 to call for the release of 20 people who were arrested after clashes between police and demonstrators on 6th May of 2012. Photo: Nickolay Vinokurov / Demotix

Media will face increased restrictions in the build up to the Winter Games in Sochi as Russian president Vladimir Putin tries to rehabilitate a damaged domestic reputation, experts suggest.

Tighter controls on dissident media, more proactive use of state news outlets to mold public consensus, and obstacles to foreign reporters operating in the region can all be expected as the games begin on 7 February.

While Russian authorities have hailed the Games as a triumph, ongoing disputes over the payment of migrant workers, the environmental impact of Sochi’s intensive development, forced evictions of residents, intensive security measures, and Russia’s controversial gay propaganda law have all generated a domestic backlash that many believe is being deliberately ignored by state media. On 17 October, 2013, Roman Kuznetsov, a migrant worker from the Russian city of Orenburg who had helped build the Media Centre for the Sochi Olympic Games, sewed his lips shut with a needle and thread in protest against his employer’s failure to pay him several months of wages. He carried a sign that explained “Please help get reporters attention! I am not from around here”.

In an interview with select global media, Putin explained “I would like the participants, guests, journalists and all those who watch the Games on TV and learn about them from the mass media to see a new Russia, see its personality and its possibilities, take a fresh and unbiased look at the country”. Close restrictions recently imposed on press activity suggest otherwise. Only a small number of Olympic Events have been cleared for coverage by local journalists, including the arrival of IOC delegations and formal updates offered by federal officials. Access to government activities is granted only to the All-Russia State Television and Radio Broadcasting Company.

In a report produced by the Centre for the Protection of Journalists, a number of local journalists allege a more proactive media strategy in addition to direct censorship. Several reporters suggested that it was fairly common for media that receive funding to be directly censored by the administration. Local journalists also reported that the All-Russia State Television and Radio Broadcasting Company often stage interviews, and had been passing off closely scripted lines as dialogue with ordinary residents of Sochi. According to Russian Government website Zakupki, which details financial transactions at all levels of Russian government, the Sochi administration has distributed some 32,628.600 rubles (US$988,788) to 17 media organisations, including four television channels, six newspapers, one magazine, three radio stations, and one informational agency. It is not clear what form the funds took.

Aleksandr Valov, founder of BlogSochi, which seeks to document the impact of the Games on Sochi’s residents, explains “One begins to understand why Sochi media only talk about the government’s achievements and keep silent about the problems. The popular saying ‘He who pays the piper calls the tune’ comes to mind.”

International journalists covering Sochi have also been closely curtailed. Police from the Russian Republic of Adygea neighboring Sochi repeatedly stopped, detained, and threatened a two-person crew from Norway’s TV2- the country’s official broadcaster of the Olympic Games. At every stop and in detention, officials questioned the journalists aggressively about their work plans in Sochi and other areas, their sources, and in some cases about their personal lives, educational backgrounds, and religious beliefs. In several instances they denied the journalists contact with the Norwegian Embassy in Moscow. One official threatened to jail them both, the journalists told Human Rights Watch. Dutch photojournalist Rob Hornstra was denied a Russian visa in an apparent attempt to stop him from doing further work in the turbulent North Caucasus, and American journalist David Satter was forcibly expelled from the country in December.

Since beginning his first term as president in 2000, Vladimir Putin has carefully controlled his media presence, closing a number of independent media outlets and amalgamating others with state bodies, whilst tightly controlling the presence of foreign media. Professor Owen Johnson teaches at the School of Journalism at Indiana University, and has researched the role of media in Russia intensively. He offers a simple explanation for the recent expulsions ‘”While it would seem that this runs counter to other more positive actions by President Putin recently, this might be designed to make visiting journalists more cautious,” Johnson said. “Putin is less concerned about world public opinion than he is about his continued support in Russia.”

Domestic attitudes to Putin are changing fast, according to Mikhail Dmitriev, former director of Russia’s State Run Centre for Strategic Research. Over the past year discontent in the country at large has deepened and broadened, spreading across all social groups and ages. While support for Putin is stable in St. Petersburg and Moscow, where incomes remain high, fluctuating fortunes in Russia’s rural regions is starting to generate distrust. Dmitriev said the latest focus groups show that Putin is less associated with stability and more with uncertainty. His past achievements are becoming a distant memory, and his recent stunts, such as flying with cranes or diving for ancient amphorae, merely cause irritation.

The Sochi Games, Putin explained in a conference with journalists, will be an important global symbol of Russian achievement and resurgence. For Putin, well-managed domestic media coverage seems an important strategic component of his long term success and survival.

This article was originally posted on 5 February 2014 at indexoncensorship.org