“When it comes to the press, the threat is not direct anymore. The strategy is now more refined. It's like chess.” 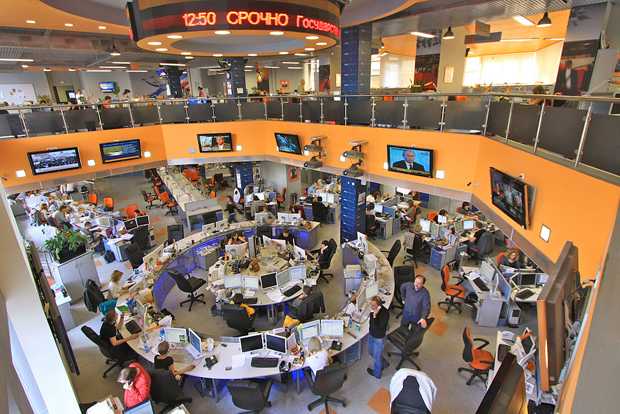 “I just got fired,” a RIA Novosti journalist told Index a few days ago. On 9 December 2013, a surprise decree by president Putin ordered the closure of the state-owned, 73-year-old RIA — one of Russia’s most established news services. It’s liquidation has now kicked in, and it will be replaced by a new agency named Rossiya Segodnya (“Russia Today”), headed by Dmitry Kiselyov, who made his name as an abrasive Kremlin-loyal television personality. Employees have had to choose between staying at the replacement agency or sign redundancy contracts. Most journalists at RIA’s well-respected English service are leaving. They have no intention of taking orders from Kiselyov, who is famous for his homophobic and anti-Western rants. He once said, on TV, that “fining gays is not sufficient — they should not be allowed to give blood, or sperm and in case of a car accident, their hearts should be burnt or buried as useless”.

With 60 offices abroad, RIA was a vast media empire presenting a wide range of information. In April 2013, over 9 million internet users visited its website, which made it the 11th most popular European news website. Christopher Boian, who directed RIA’s foreign language news website and helped make it more dynamic and more respected, told Index: “This was a big state-owned media outlet. It was unique. It seemed to reflect a maturity about the Russian media. We were not anti-Putin or pro-Putin but just trying to look objectively at what was going on.”

Rossiya Segodnya will share its editor in chief with the Kremlin-funded TV news channel RT. It is unlikely to strive for objectivity. In his first speech at RIA’s office, Kiselyov declared: “[Russia’s] post-Soviet journalism is unlike Western journalism in that it does not reproduce values, it produces them.” And added: “Objectivity is a myth which is proposed and imposed on us. Imagine a young man puts his hand on the shoulder of a girl, and in the best case, says ‘you know, I have long wanted to tell you that I regard you objectively.’ Is that what she is expecting? Not likely. In the same way our country — Russia — needs our love.”

In January, Dozhd, a popular independent TV channel which came to prominence for its coverage of anti-government protests in late 2011, was dropped by satellite and cable operators after it caused outrage publishing a poll asking readers whether Leningrad should have been surrendered to the Nazis in order to save hundreds of thousands of lives. Putin’s press secretary Dmitry Peskov declared that the “station had crossed all the limits of what can be tolerated” and that the question posed by the survey was an offence “much more serious from the point of view of morality and ethics”. The channel has now lost around 80 per cent of its audience and, as a result, most of its advertisers. It’s facing imminent closure.

“The situation does not look promising. Things seem to have been orchestrated, as five independent operators dropped us in a matter of weeks, but we can’t prove they have been,” Pavel Lobkov, a veteran journalist who was dismissed from federal channel NTV in 2012 — for what he alleges were political reasons — and found a new home in Dozhd, tells Index. “When it comes to the press, the threat is not direct anymore. The strategy is now more refined. It’s like chess”, he adds.

In February, Ekho Moskvy (Echo of Moscow), one of Russia’s few independent broadcasters, majority-owned by Gazprom-Media — the media arm of the gigantic conglomerate that is one of the bases of Kremlin power — encountered difficulties. Its head was dismissed and replaced by an editor from state media, after a reshuffling of the board of directors tilted the balance in favour of pro-government people. Alexei Venediktov, Ekho’s long-standing editor, has just been reelected by the journalists at the station, though his position still needs to be approved by the board.

“As soon as Putin became president, he moved against the media and made sure national TV was under control – which proved to be a very effective tool,” Maria Lipman, chair of the Carnegie Moscow Centre’s Society and Regions Program, told Index. Financial and legal leverage was used to shut down media outlets that were seen as potential threats. In 2000, the independent TV channel NTV — which had been critical of the war in Chechnya — was acquired by Gazprom-Media, its owner forced to flee the country and its editorial line changed. “What remained were oases of non governmental media. The government was permissive because there was no political opposition. You could make noise, but no one would pick it up,” Lipman adds.

According to her, a new crackdown began in 2012 with the return of Putin to power in the wake of big protests. A series of dismissals took place and a few publications closed down — always explained by economic factors. “Gradually there was a sense that the realm of free expression was shrinking, that there were fewer jobs to be found and more self censorship,” she says.

The recent years have seen an unprecedented increase in the concentration of media ownership, with huge media properties accumulating in the hands of a few Kremlin loyalists. These include Yuri Kovalchuk, a member of Putin’s close circle dubbed “Russia’s Murdoch”, who owns the National Media Group, or Alisher Usmanov, Russia’s richest man (who fired the editor of Kommersant Vlast in 2011 for having published pictures with anti-Putin slogans in an issue alleging election fraud). Usmanov recently acquired control over VKontakte, Russia’s largest social network, whose founder has left Russia. Lobkov tells me he believes the Kremlin’s next target will be the internet. In January, parliament passed a law giving the state powers to close blacklisted websites.

“The Kremlin has been sophisticated enough not to go against individuals or editors. Its favourite tool is to exert its influence through media owners,” Lipman says, pointing out that not every case of pressure against a media outlet necessarily comes from the government, as there are “competitions, personal scores, a combination of factors.” Dozhd owners say their troubles started after they reported on the expensive properties owned by certain Kremlin officials.

“Following recent events in Ukraine, the propaganda on national media has been extremely intense. State media has presented the picture of a fascist coup inspired by the west. For anyone interested there is no shortage of information on the web. When the crisis subsides it remains to be seen whether the outlets that have covered it in a different fashion will be punished,” Lipman says.

Last week, Izvestia newspaper reported that a United Russia party deputy is readying legislation that would, among other things, make it a crime to “allow publications of false anti-Russian information.” The tightening of control over the Russian media is likely to continue.