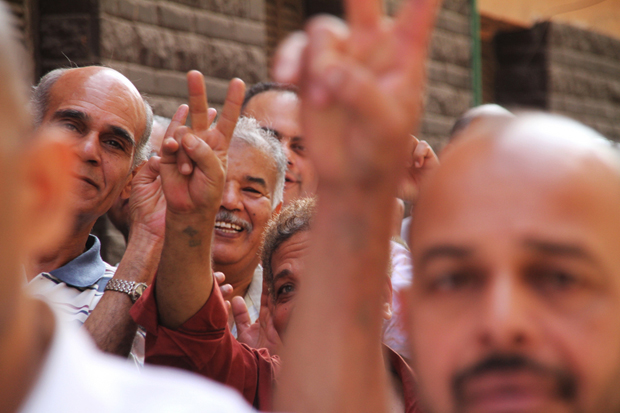 “El Sisi will not reside in the Presidential Palace but will instead be a roving President.”

Surprisingly — or perhaps not so surprising — the headline in the independent Al Masry El Youm newspaper was published Sunday, a day before Egyptians headed to polling stations to vote in their second presidential elections since the ouster of Hosni Mubarak three years ago. Egyptians had not yet cast their ballots but the country’s media had already declared former army chief Field Marshall Abdel Fattah El Sisi the winner in the presidential race. In an election that analysts have described as “lacking in suspense” and the outcome of which was “a foregone conclusion,” El Sisi, who is running against rival leftist candidate Hamdeen Sabahy, is widely expected to emerge as the victor, cementing the military’s grip on power.

In the weeks leading up to the vote, Egyptian media had reverted to Mubarak-era policies, persistently lionising El Sisi (and the military) while demonising his opponents. Government critics and dissenters of all stripes have meanwhile, been branded “terrorists” and “traitors,” in a trend reminiscent of the early days of the January 2011 mass uprising when the pro-democracy activists in Cairo’s Tahrir Square were described by state-controlled media outlets as “thugs” and “foreign agents.” Since the toppling of Islamist President Mohamed Morsi on July 3 ,2013 by military backed protests, the airwaves have been saturated with a constant stream of patriotic songs set to images of cheering crowds and of El Sisi in military uniform.

In the wake of the July 3 military takeover of the country however, the propaganda narrative has not been limited to the state-run Maspero media network, for decades the mouthpiece of various successive regimes. In the current repressive climate, many of the privately-owned media outlets are now also in lockstep with the country’s military-backed authorities. After Islamist channels were forcibly silenced last summer, there has just been one narrative in Egyptian media: the official narrative. Observers lament the reversal of one of the most important gains of the January 2011 revolution: a freer press.  Some analysts explain the rallying of the media around the military’s nationalistic flag as a “natural reaction” to the looming  “threat of terrorism.”

“Perhaps the media is simply doing what the media anywhere has a tendency to do in times of war or crisis, which is to let nationalism trump professionalism,” explained the Guardian’s Rachel Shabi in an article published several weeks after the ouster of the Muslim Brotherhood President. She also suggested that the private media outlets may be “getting their own back at the Brotherhood — which , after all, harassed opposition media while in power. ”

Other analysts believe journalists are practicing self censorship for fear of being accused of treachery. “They believe that this is a fight that transcends politics, and is a battle for Egypt’s survival,” British-Egyptian journalist Sarah Carr told the Guardian. “Anyone attempting to counter this official narrative is accused of being a traitor.”

Meanwhile, the low turnout on Monday, the first day of voting in the presidential election, prompted frantic appeals by TV talk show hosts and commentators to voters to cast their ballots.

“We are in a state of war. The low turnout gives the West and traitors inside the country a signal to pursue their conspiracies against Egypt. The country will face serious problems and may even transcend into a fragmented state like Syria or Libya”, journalist Mostafa Bakri warned Monday evening in an interview broadcast on the privately-owned El Thawra Channel.
“Those who boycott the elections are giving the kiss of life to terrorism.They are traitors,” he added, exhorting all “patriots” to participate in the election.

On his show El Qahira El Youm broadcast on the Saudi-owned Orbit satellite network, popular talk show host Amr Adeeb urged business owners to inspect the fingers of their employees for traces of ink to make sure they voted. “Tomorrow is not a public holiday for leisure,” he told viewers shortly after the Prime Minister declared Tuesday a holiday ” in compliance with the will of the people.”

On the privately-owned CBC channel, presenter Lamis El Hadidi used another tactic to persuade citizens to vote. Directing her message to Egypt’s Coptic Christians and playing on their fear of Islamists, she reminded the country’s minority Christian community of the torching of  churches under Islamist rule. Her comments provoked an outcry on social media networks from young activists who perceived her remarks as “incitement to hatred ” and “serving to fuel sedition” in an already deeply polarised country.

“She is clearly suffering from amnesia. El Hadidi ‘forgot’ to mention the Maspiro massacre of Coptic Christians ,” retorted activist Nahed el Tantawy in a Facebook post, in reference to the violent dispersal by the military of a Christian protest rally outside the State TV building in October 2011.

The independent Al Masry El Yom meanwhile reminded citizens of the warning issued by the country’s Supreme Electoral Commission that those boycotting the vote would be fined 500 LE for abstaining.

Despite the calls for a big turnout by the country’s largely pro-military media, there was no sign of an early morning rush to polling stations as booths opened on Tuesday, the final day of the two-day vote. A judge at a polling station in Cairo’s affluent residential neighbourhood of Maadi blamed the markedly low turnout on the smeltering summer heat.

“People prefer to stay indoors in this hot weather,” he told Index.

Analysts however, believe that “apathy” and “fear of violence” are keeping voters away from the ballot box. Many of the country’s secular youths who helped mobilise the public for the 2011 mass protests demanding bread, freedom and social justice, are frustrated by what they see as “a return of the oppressive police state” they helped dismantle three years ago. Since last summer’s coup, a brutal security clampdown on Muslim Brotherhood supporters and liberal activists alike, has prompted a noticeable youth disengagement from politics. More than 1,400 protesters have since been killed by security forces while thousands of opposition figures languish in prisons on what rights activists perceive as “trumped up” charges. An April court ruling outlawing the April 6 movement — a pro-democracy group that was a driving force behind the January 2011 uprising — on charges of “espionage” and “damaging the country’s image abroad” is seen as a manifestation of the current climate of repression as are the rulings sentencing hundreds of Muslim Brotherhood supporters to death for their role in protests.

El Sisi has already made it clear that the crackdown on free expression will continue, should he become president. In a recent televised interview broadcast as part of his election campaign, he said “freedom of speech undermines national security,” adding that the role of the press was to “forge unity.”

It is little wonder that many sceptical , pro-reform activists perceive the return of the military regime as being part of a counter-revolutionary plan. “The interim military-backed authorities and their supporters in the media have spared no effort in their attempts to distort truths and disfigure the revolution,” they lament. ” Sadly, their efforts have so far been successful.”

This article was published on May 27, 2014 at indexoncensorship.org