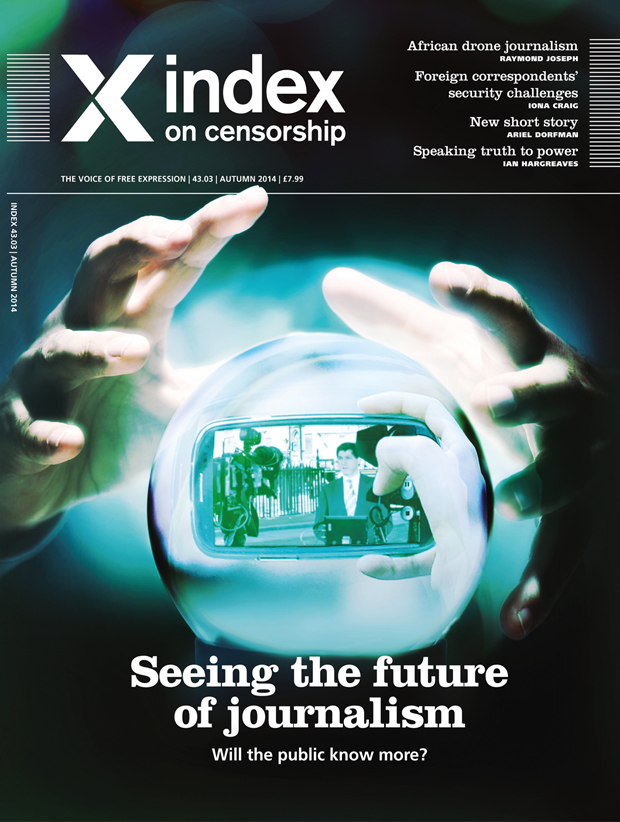 In the autumn issue of Index on Censorship magazine, don’t miss: Burmese-born author Wendy Law-Yone on the challenges the Burma’s media face in the run-up to the next election; TV journalist Samira Ahmed on how television channels should respond to viewers’ complaints; award-winning foreign correspondent Iona Craig reports from Yemen on threats to journalism in conflict zones; plus a brand new short story from playwright and author Ariel Dorfman.

While debates on the future of the media tend to focus solely on new technology and downward financial pressures, we ask: will the public end up knowing more or less? Will citizen journalists bring us in-depth investigations? Will crowd fact-checking take over from journalists doing research? Who will hold power to account? The subject is tackled from all angles, from our writers from across the globe.

Also writing for this issue are Australia’s race commissioner Tim Soutphommasane; human rights lawyer Tamsin Allen on defamation; and novelist Kaya Genc. From South Korea Steven Borowiec talks to controversial artist Lee Ha, and in London political editor Ian Dunt walks the corridors of political power in the UK’s Houses of Parliament and asks if journalists there get too close to government.

You can buy the print version magazine or subscribe for £31 per year here, or download a digital version for your iPad for just  £1.79. All subscriptions help fund Index’s work, protecting freedom of expression worldwide.

Read about our magazine launch at the Frontline Club on 22 October.

Back to the future: Iona Craig on journalists trying to stay safe in war zones

Re-writing the future: Five young journalists talk on their hopes and fears for the profession – from Yemen, India, South Africa, Germany and the Czech Republic

Attack on ambition: Dina Meza on a Honduran generation ground down by fear

Generation why: Ian Hargreaves asks on how the powerful may or may not be held to account in the future

Making waves: Helen Womack reports from Russia on the radio station standing up for free media

Switched on and off: US journalist Debora Halpern Wenger on TV’s power shift from news producers to news consumers

TV news will reinvent itself  (again): Taylor Walker interviews a veteran TV reporter on the changes ahead

Right to reply: Samira Ahmed on how the BBC tackles viewers’ criticism

Lobby matters: Political reporter Ian Dunt on the push/pull of journalists and politicians inside Britain’s corridors of power

Print running: Will Gore on how newspapers innovate for new audiences

Maid equal in Brazil: Claire Rigby on the Twitter feed giving voice to abuse of domestic workers in Brazil

Home truths in the Gulf: Georgia Lewis on how UAE maids fear speaking out on maltreatment

We have to fight for what we want: our editor, Rachael Jolley, interviews the OSCE’s Dunja Mijatovic on 20 years championing free speech

Holed up in Harare: Index’s contributing editor Natasha Joseph reports from southern Africa on the dangers of reporting in Zimbabwe

Burma’s “new” media face threats and attack: Burma-born author Wendy Law-Yone looks at news in the run up to the impending elections

Head to head: Sascha Feuchert and Charlotte Knobloch debate whether Mein Kampf should be published

From the factory floor: Vicky Baker on listening to the world’s garment workers via new technology

3 responses to “Current issue: Seeing the future of journalism – will the public know more?”