A Kenyan woman speaking out for women in one of the world’s most dangerous regions and a female journalist who exposed an unreported uprising in Saudi Arabia are among the winners of this year’s Index on Censorship Freedom of Expression Awards.

“Our shortlisted nominees are all tackling direct and serious threats to stifle free speech,” said Index on Censorship CEO Jodie Ginsberg. “We were humbled and inspired by their stories, and their dedication to ensuring we can all speak freely.”

The awards were presented at a ceremony at The Barbican, London, hosted by comedian Shappi Khorsandi whose father Hadi was forced into exile from Iran because of his satirical writing. 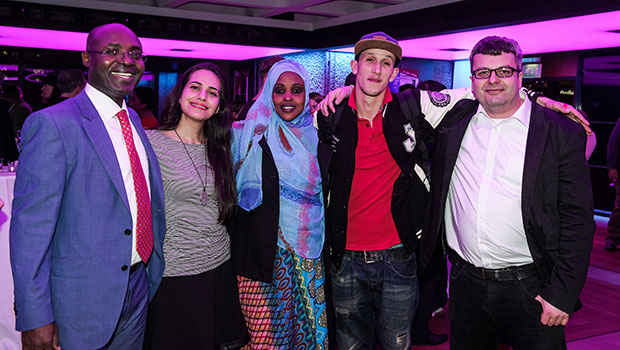 The crime of free expression 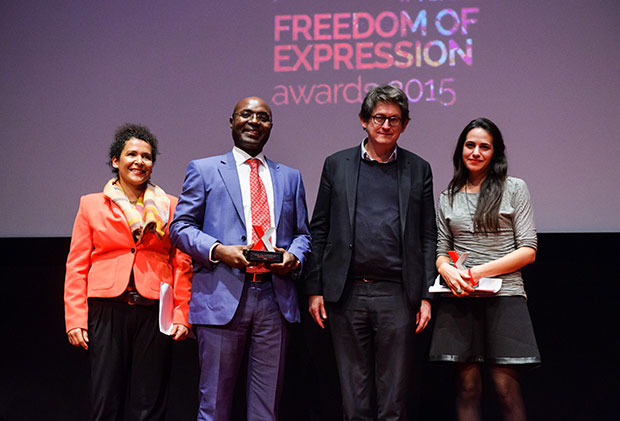 Al Ahmad was recognised for her documentary Saudi’s Secret Uprising, which exposed details of an unreported mass demonstration in Saudi Arabia. “Safa Al Ahmad dared to go into places that are difficult for women and for reporters, to bring that information back and share it with the world,” said Turkish author Elif Shafak, one of the five judges. Saudi Arabia is a mystery, even to its own people, said Al Ahmad in her acceptance speech: “Parts of our history is deliberately concealed, the present is muddled with rumours and half-truths. The government-owned and controlled media play a major role in the dissemination of those false realities of ourselves and others. This makes facts a precious commodity in Saudi Arabia.”

Angolan investigative reporter Marques de Morais has been repeatedly prosecuted for his work exposing government and industry corruption and will go on trial on 24 March charged with defamation. “Rafael is a very important individual doing very important work in a very, very difficult environment,” said judge Sir Keir Starmer QC. Marques de Morais dedicated his speech to the Zone 9 group of Ethiopian bloggers currently in jail “for the crime of exercising their right to freedom of expression”. 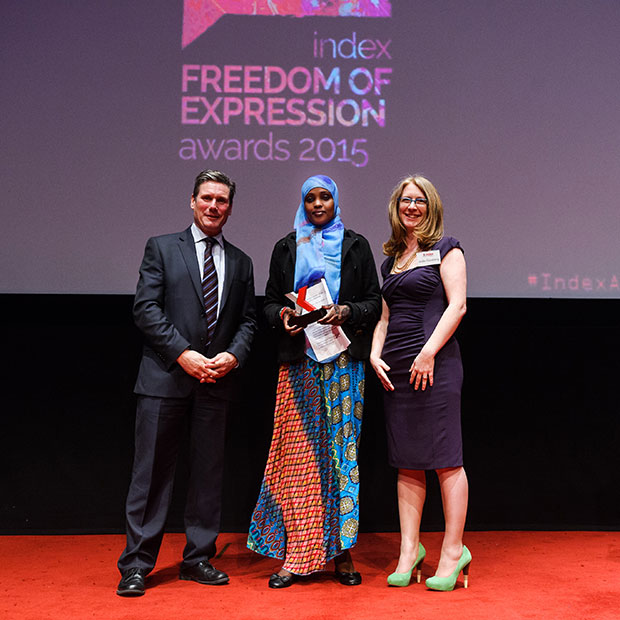 The winner in the campaigning category, Amran Abdundi, is a women’s rights activist based in north-eastern Kenya and runs a group helping women along the dangerous border with Somalia, where terrorism and extremist violence dominate. Judge Martha Lane Fox said: “Amran Abdundi was a standout candidate for me. She is doing something incredibly powerful in an unbelievably complicated and dangerous situation.” Abdundi dedicated her award to the “marginalised women of northern Kenya… who will now know that their struggles and their efforts to fight for their rights are being recognised internationally”.

Help us let the world know the truth 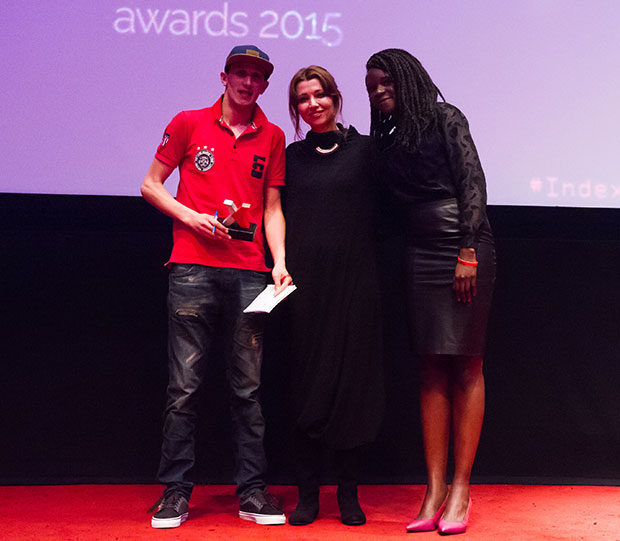 Arts category winner Mouad “El Haqed” Belghouat is a Moroccan rapper and human rights activist whose music highlights widespread poverty and endemic government corruption in Morocco. He has been imprisoned on spurious charges three times in as many years, most recently in 2014. Belghouat said in his acceptance speech: “I have been through difficult times: I was jailed, fired from my work, rejected by many friends. I am still forbidden to sing in my own country. But after all that I am still determined that I will never change my position. I will fight for freedom, equality and human rights for ever.” Lane Fox said Belghouat had taken his music and “translated it into a kind of online activism, but then, crucially, mobilised people in the street”.

The digital award, decided by public vote, went to Hungarian investigative news outlet Atlatszo.hu managed by Tamás Bodoky. The website acts as watchdog to a Hungarian government which has increasingly tightened its grip on press freedom in the country. Editor-in-chief Bodoky said Atlatszo.hu called on all those who believe that independent journalism in Hungary is under threat. “All those who agree that politics and business interests have sunk their claws into everyday life. All those who know that taxpayer money is vanishing. We are calling on you to help us let the world know the truth.” 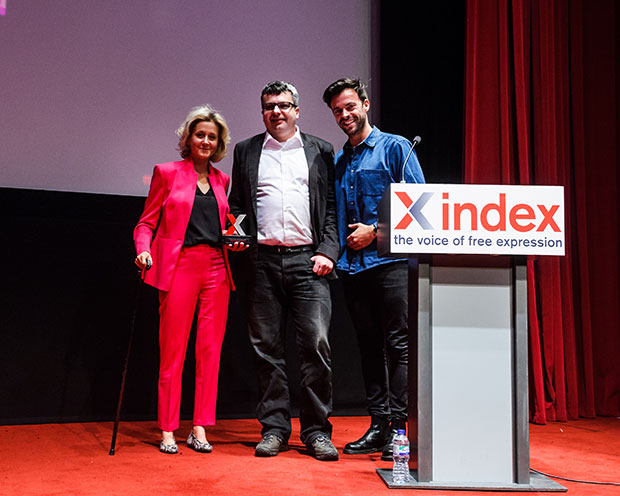 The awards were presented by the judges along with special guests including Guardian editor Alan Rusbridger.

A special award was also given on the evening to honour the many Azerbaijani journalists and activists jailed or forced into exile or hiding following a recent crackdown by the government. Former award winner and journalist Idrak Abbasov, who was forced to flee Azerbaijan last year, accepted the award on behalf of all those facing persecution in the country. “I call upon the world community to help Azerbaijan… so that our colleagues might be released and that our country might become a normal state in which we and others might live freely,” Abbasov told the audience in a video speech.

The evening featured an exhibition of specially commissioned cartoons by international cartoonists, reflecting on the past 12 months for free expression. Most of the artists had direct experience of persecution over their work, including Syrian political cartoonist Ali Ferzat – a former Index award winner – and Malaysia’s Zunar. “In the wake of the attacks on Charlie Hebdo, we wanted to pay homage to the work of cartoonists who are so often the first to face censorship in any move to stifle free expression,” said Index’s Jodie Ginsberg.

Related
• Safa Al Ahmad: Facts are a precious commodity in Saudi Arabia
• Rafael Marques de Morais: I believe in the power of solidarity
• Amran Abdundi: This award is for the marginalised women of northern Kenya
• El Haqed: I will fight for freedom, equality and human rights for ever
• Tamas Bodoky: The independence of journalism in Hungary is under threat
• Special Index Freedom of Expression Award given to persecuted Azerbaijani activists and journalists
• Video: Comedian Shappi Khorsandi hosts Index on Censorship awards
• Drawing pressure: Cartoonists react to threats to free speech

An earlier version of this article stated that Rafael Marques de Morais will go on trial on 23 March. The date is 24 March.