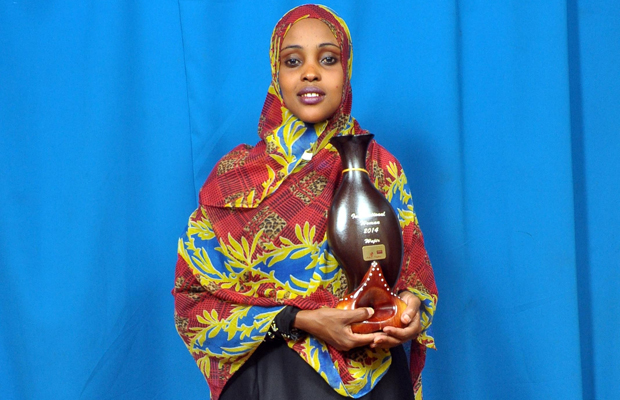 Amran Abdundi is a women’s rights activist based in northeastern Kenya. She runs the Frontier Indigenous Network, an organisation which mobilises female peace builders and rights activists to set up shelters along the dangerous border with Somalia. It offers first aid to the injured as well as to women and girls who have been raped, moving victims to a safer part of Kenya.

As well as protecting citizens endangered by the guerrilla activities of the Al Qaeda-linked group Al Shabaab, Abdundi and her organisation also help those fleeing drought and failed harvests in Somalia. Abdundi is also behind radio-listening groups for women, which share information about access to tuberculosis treatment, among other things.

In a society that teaches women to leave decision-making to men and to look down when men pass, Abdundi’s Frontier Indigenous Network empowers, educates and mobilises rural women to challenge such outdated social codes.

The Al Qaeda-allied Islamist group Al Shabaab has sown terror in the Kenya-Somalia border region, one of the world’s most inhospitable areas. Women in the region are often the victims of violence, rape and murder. The northern region of Kenya is one of deeply conservative social customs, in which a man owns property on a woman’s behalf – even when the woman has bought the land. In the environment Abdundi operates in, a quarter of Kenyan girls and women have endured genital mutilation, despite legislation outlawing the practice.

She said that some of the initial challenges the organisation faced have been overcome. In the beginning it was hard to talk to parents about their girls and “how the women have suffered”, she explained. “But now they understand us. They know how good we are and we want to change their lives.”

One of Frontier Indigenous Network’s biggest achievements in 2014 has been in mapping out conflict areas in northern Kenya. It focuses on the factors which fuel armed violence occurring after peace agreements are signed between warring parties. Aware that small arms and light weapons were one of the biggest obstacles to peace in the region, Abdundi and her group mapped many of the weapons used by the combatants. She then instigated a regional agreement to pursue arms traffickers, closing boltholes used by smugglers along the Somali border and developing a register of all recovered weapons. The agreement also targeted a network of groups running an illegal arms trade.

Abdundi has established radio-listening groups specifically for women, in which she encourages them to challenge the repressive cultural values preventing women from being permitted to own property or livestock. She uses the radio groups to reach women with tuberculosis, educating them about access to treatment and breaking cultural beliefs that tuberculosis is caused by curses and bad omens.

Abdundi has also mobilised women along the Kenya-Somalia border to rise against Al-Shabaab, a militant terrorist group, by educating them on the dangers of following the doctrine propagated by the terror organisation; she has received a number of death threats as a result of this work. She has also campaigned against the practice of female circumcision in northern Kenya.

She said: “My dream is to help women, girls and children. I just want to see them doing good. That’s my dream.”

This article was published on March 2, 2015 at indexoncensorship.org