The twists and turns in the fate of “barefoot lawyer” Chen Guangcheng have held all in its thrall. Despite the vigilance of web censors, China’s netizens — particularly its social media users — have found inventive new ways of discussing the case.

China’s web nannies have been on high alert ever since Chen fled his home in his native Shandong province. To bypass the censors, netizens concocted nicknames for Chen, including “Shawshank” (a reference to the film, The Shawshank Redemption) and “Sunglasses” (denoting Chen’s trademark black sunglasses). But within days, these search terms were also blocked .

Tea Leaf Nation, a blog that “makes sense of China through social meda”, rounded up the memes and graphics that people used to express their support for Chen, including photos of girls on Weibo with “Free CGC” tacked onto their bare legs. The pictures are now likely to be deleted. 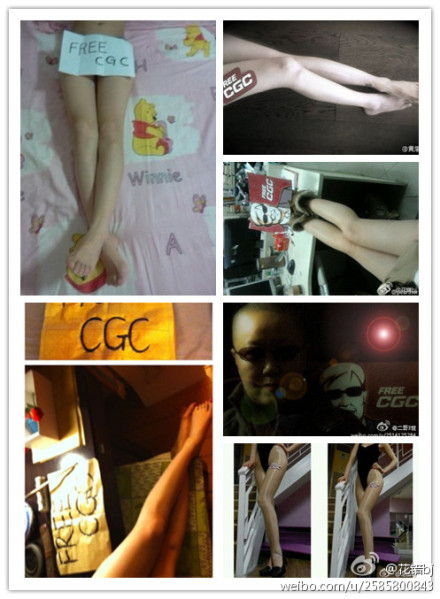 Blocking on Sina Weibo (China’s hugely popular version of Twitter) has been systematic in the Chen case. “Chaoyang Hospital” the facility where Chen received treatment, is now an illegal term. When you search for it, Weibo tells you that “according to the relevant regulations, search results cannot be shown.”

What we found is that while Sina did not block “left of his own volition” as a search term … the company clearly took steps to smother discussion of the term by disabling the indexing of new posts containing the term. … While you can still search for posts with “left of his own volition,” you will only see results from before 16:50 this afternoon, which is approximately when Sina blocked the indexing.

Hong Kong University’s China Media Project, has been, as always, the most reliable source of information on what’s been censored. A post by Xiong Peiyun, a journalist and fellow of the centre, is on the Weibo ban list. Links to Xiong’s piece which criticised China for asking for an apology from the US for sheltering Chen in its embassy have been deleted.

The Financial Times report that Wu Guanchong was an entrepreneur and avid internet user based in Guangzhou who allegedly used Weibo to circulate rumors about a coup in Beijing. He has been missing for about a month, it is being claimed he was taken away at the end of March by officials from the capital.

Meanwhile, when one searches on Weibo in Chinese for Li Delin, a financial journalist who also blogged extensively on the case, the following notice appears:

Recently, some lawless individuals have used Sina microblog to make up and spread rumors for no reason, which has had a bad effect. They are now being dealt with by Public Security according to the law.

There were a few comments on Weibo about these notices. A student called Zhang Shaoyan wrote:

This [notice] made me think of how our textbooks had described the Kuomintang [Chinese Nationalist Party]. It’s been eighty years, but now the mountains are on our own heads.

Zhang’s comparison of the tactics of the ruling party with the Kuomintang (defeated by the Communist Party during the Chinese civil war) is hardly original. There was a reason he felt so strongly: one of his microblogs had just been deleted.