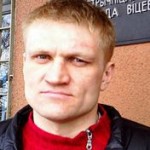 Political activist Siarhei Kavalenka may have given up his hunger strike but his fight for freedom in Belarus continues, says Andrei Aliaksandrau

In January 2010 Siarhei Kavalenka, a political activist and small businessman from Vitsebsk, northern Belarus, climbed a 40-metre high New Year tree in the centre of the city and hung a red and white flag as a symbol of the Belarusian opposition.

If he had climbed the tree for any other reason, he might have faced a minor administrative trial and got away with a fine. But a red and white flag, once a national symbol and now an oppositional hallmark so much hated by the authoritarian government, cost Kavalenka a criminal conviction and a three-year suspended sentence.

On 19 December 2011, on the first anniversary of Belarus’s controversial presidential elections, Kavalenka was detained again, accused of violating the probation rules. Two months later the judge announced the verdict: 25 months in prison.

Kavalenka considers his conviction to be politically motivated. In protest against his imprisonment, he went on hunger strike for almost half a year, with only two breaks. He lost nearly 40 kilograms. His family and friends were worried for his life, let alone his health. According to his wife, Alena, who was able to meet her husband several times during his imprisonment, Kavalenka has serious health problems. In addition, she reported he faced physical torture and psychological pressure behind bars.

Many voices inside and outside Belarus and have demanded that the Belarusian authorities release Kavalenka together with all other political prisoners.

But the government of Belarus remains deaf to these appeals. Kavalenka has been refused civil medical assistance and is treated by prison doctors. In April, the authorities started force feeding him to keep him alive.

“The situation itself is beyond the legal framework because Kavalenka is sentenced illegally,” Uladzimir Labkovich, Belarusian human rights defender and lawyer, said. “He is a victim of the reprisal imposed on him by the authorities.”

Kavalenka ended his hunger strike at the end of May, but he is not giving up his fight, and nor are his family and friends. His wife, other relatives and Belarusian civil society activists have been detained several times after staging public actions of solidarity; some of them have been beaten by the police. At the moment Alena Kavalenka, Kavalenka’s cousin Kanstantsin and activist Alena Semenchukova are awaiting court hearings for chalking “Freedom to Siarhei Kavalenka!” on the pavement in front of the court building in Vitsebsk.

“He is very weak physically, but has no access to quality medical help,” Alena Kavalenka told Radio Liberty after she met her husband in prison. “I don’t know why he is being exterminated for his love for his motherland.”