DEFAULT
For Egypt's women, the revolution has only begun
02 Oct 2012
BY SHAHIRA AMIN

The women of Egypt played a huge role in the uprising that toppled former President Hosni Mubarak. They were on the frontlines, standing shoulder to shoulder with men in Cairo’s Tahrir Square, demanding “Bread, Freedom and Social Justice.” Their participation in the eighteen-day mass protests raised hopes for greater inclusion of women in the decision-making process and an end to the gender discriminatory policies of the past.

However since the January 25 2011 revolution Egyptian women’s voices have been drowned out, and the “new Egypt” continues to marginalise women.

Today, as the country’s new constitution is being written, hopes are fading that Egypt’s new governing code will guarantee full and equal participation of women, and there are growing concerns that women may even lose rights gained in recent years. 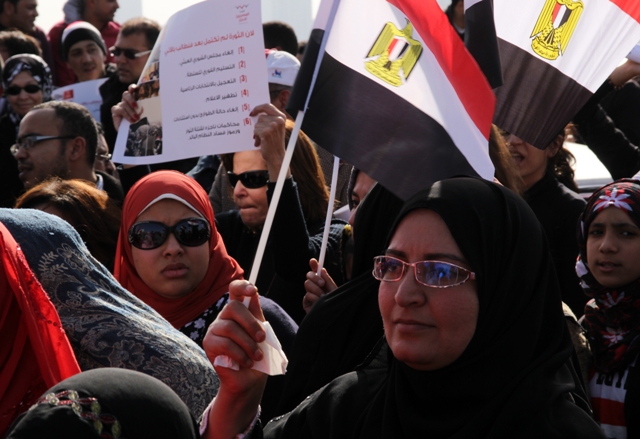 Egyptian women celebrate the one year anniversary of the country’s revolution in Cairo. Amr Abdel-Hadi | Demotix

The Islamist-dominated Constitutional Assembly — a panel tasked with drafting the new constitution — has come under fire from members of progressive political parties, youth-revolutionaries and rights activists who claim it is not fully representative of all factions of the society. Critics insist that all segments of society — including women and minority groups — must be represented to guarantee a more egalitarian and democratic constitution. Only six of the total 100 members of the assembly are women and more than 60 of the members belong to Islamist groups or parties.

Last week human rights activist Manal El Tiby quit the assembly in protest at what she described as “attempts by anti-revolutionary elements to create a constitution that maintains the same primary foundations of the regime that the revolution had risen up to overthrow”. In her resignation letter, El Tiby lamented that, despite her struggle to present suggestions for constitutional clauses that reflect freedom, social justice and human dignity for all citizens without discrimination, ­”the constitution is being prepared to serve one particular group and will not meet the expectations of the majority of Egyptians.”

Article 36 of the draft constitution (on gender equality) has stirred the greatest controversy , triggering a barrage of condemnation from pro-reform liberals and fuelling fears that women’s rights may be seriously undermined. According to the article:

the state is committed to take all legislative and executive measures to entrench the principle of the equality of men and women in the areas of political, cultural, economic and social life without prejudice — according to the provisions of Islamic law.

The link between gender equality and Islamic jurisprudence or Sharia has alarmed secularists and rights campaigners aspiring for a modern state where women are equal players. Critics fear that the wording of the article refutes the principle of gender equality, “threatening the democracy aspired for by Egyptians who took to the streets last year”, according to a  statement issued by the liberal political parties and endorsed by rights groups and public figures.

The statement exhorts protection of women’s rights earned through a long struggle, recalling Egypt’s commitment to abide by previously-signed international treaties and conventions, such as the Convention Eliminating All Forms of Discrimination Against Women (CEDAW). The statement also urges members of the Constituent Assembly to resign if the article is passed, to protest “the flagrant inequality”.

While advocates of Sharia insist that Islam fully respects women, citing their right to property ownership, education and employment , critics warn that a strict interpretation of Sharia would accord women an inferior status to men and restrict their freedom in public life.

In the last decade, Egypt had made some progress towards eliminating gender inequities enshrined in the country’s personal status law. Amendments to the law have made divorce possible for women (a right known as “khul”). The age of marriage for girls has been raised to 18 and child custody laws have been reformed to allow mothers custody of their children until the age of 15. Moreover, family courts have been established to settle disputes within trouble-stricken families. In 2008, parliament passed a groundbreaking law criminalising the practice of female genital mutilation. Two years later, legislation was passed allowing Egyptian women married to foreigners — regardless of their nationality — to pass on their citizenship to their children.

While these advances are commendable, Egypt’s personal status law (which regulates issues like inheritance, marriage, alimony, education and employment) leaves much to be desired. One point of weakness is that Egyptian women — particularly those in rural communities — do not share the same rights to inheritance as men due to the existing patriarchal culture. Meanwhile, polygamy is still legal and practised in Egypt, with men allowed to have up to four wives at the same time.

Pro-democracy activists had hoped to build on the progress made in recent years to further enhance women’s rights, post-revolution.

However, the rise of Islamists to power and the current tide of conservatism sweeping Egypt threatens to roll back some of the legal gains made by women in recent years. Conservative Islamists argue that reforms introduced under the toppled President Hosni Mubarak (including the anti-FGM and custody laws) are “Western-imposed” laws that run counter to Sharia and must be reversed. Meanwhile some conservatives believe that a woman’s place is in the home and that their role should be limited to that of mother and wife. Moreover, they require women to wear the Islamic headscarf or hijab and in extreme cases, the full face veil or niqab. In recent months, sexual harassment of women has been on the rise and there have been reported cases of ultra-conservative Islamists trying to impose their conservative norms by  intimidating women on the streets, demanding that they “cover up”. Calls for the abolishment of the law against female genital mutilation have also come from conservative women — including members of the Muslim Brotherhood’s Freedom and Justice party who say that doctors should have the final word on whether or not a girl should be cut. Islamist President Mohamed Morsi had promised to name a woman as one of his vice presidents but had to settle instead for appointing a female ” presidential aide”. Liberals believe this is a ceremonial post to appease the reformists and question whether she will be given any meaningful authority.

Growing fears among secularists and women’s rights advocates that strict interpretations of Sharia may restrict freedoms and strip women of the gains they’ve made in recent years have prompted calls by some liberals for abolition of Article 2 of the constitution (which stipulates that the principles of Islamic law are the main source of all legislation). The Grand Sheikh of Al Azhar, Ahmed el Tayeb has meanwhile, defended the provision arguing that “it represents the doctrine and identity of the state.” His statements came in response to remarks by hardline Salafists insisting that “the new constitution should cite Sharia law — rather than its principles — as the main source of legislation.”

The controversy over Sharia has sparked heated debates both within and outside the Constituent Assembly, reflecting the ideological differences within the society itself. It remains unclear however, when and if members on the panel will be able to reach consensus or whether a new assembly will be created to replace the existing one (given that the legality of the assembly has been challenged in the Supreme Court following the dissolution of parliament). As the fate of its Egypt’s constitution hangs in the balance, moderate voices are suggesting alternative “compromise solutions”. They say that moderate interpretations of Sharia can promote gender equality rather than encourage discrimination against women, citing Morocco’s women-friendly Family Code (which promotes women’s equality within the family) as a model.

Meanwhile, the battle for the identity of the “new Egypt” continues.

Journalist Shahira Amin resigned from her post as deputy head of state-run Nile TV in February 2011. Read why she resigned from the “propaganda machine” here

One response to “For Egypt’s women, the revolution has only begun”