DEFAULT
The trouble with Taraf
11 Jan 2013
BY KAYA GENC 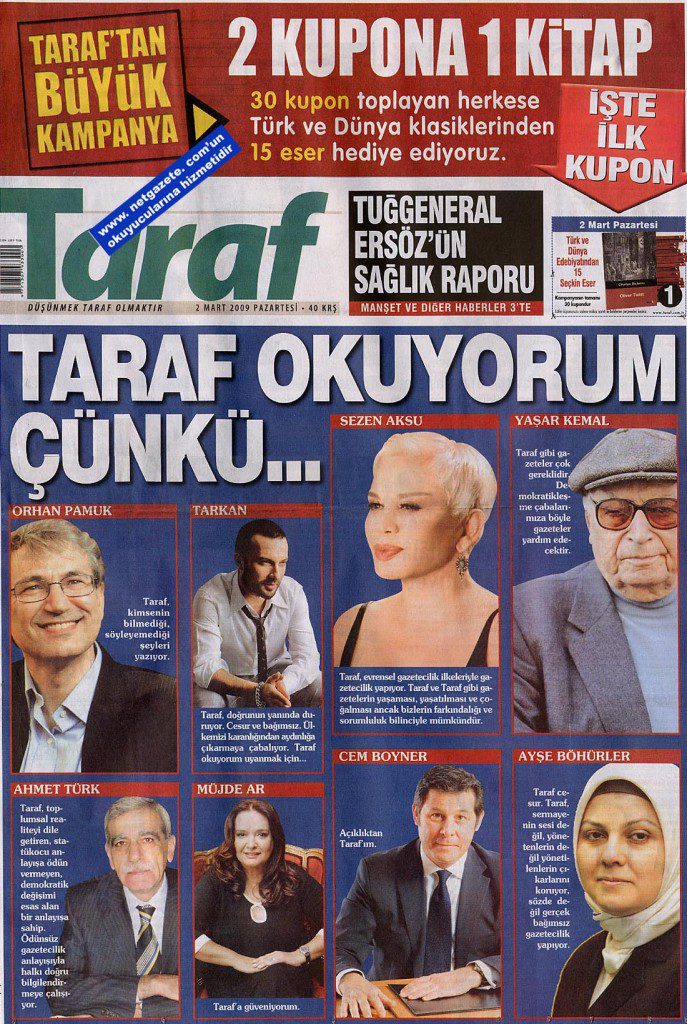 After two executive editors of Turkey’s Taraf newspaper resigned last month the media furore that followed was so intense that there was hardly a conversation between Turkish journalists in the ensuing days that didn’t include the word “Taraf” in it.

Indeed, since the furore, the newspaper’s circulation has grown from 50 thousand copies to 65 thousand a day.

The paper was established in November 2007 and was initially edited by a trio of authors and journalists: Ahmet Altan, a popular novelist, columnist and public intellectual stood alongside Alev Er, whose stature among journalists may be said to equal that of Alan Rusbridger in England. Yasemin Çongar, previously the Washington correspondent of the mainstream Milliyet came to Istanbul to contribute to the project and helped hire journalists.

In its five years, Taraf has divided opinion between those who praise its courage and integrity, and others who find grave fault with Taraf’s machinations.

The main theme of Taraf’s journalism had been its ardent anti-militarism — something welcomed by many of those placed in the opposite ends of the political spectrum. In an era where generals rebuked, sued and criminalised journalists who dared question issues sensitive to the General Staff, and Kurdish, Islamist and leftist newspapers, and news magazines could be closed in the course of a few days, simply because an official had filed a complaint, Taraf was seen as a welcome voice among establishment newspapers which largely succumbed to the militarist line.

Indeed, part of the motivation behind the foundation of Taraf may be said to be the publication of the so-called “coup diaries” of a retired marine corps general by Nokta magazine, where the later-imprisoned journalist Ahmet Şık worked as a reporter. The general who was claimed to have written the diary, called Nokta’s cover story a fabrication; according to his defence team Nokta had collaborated in a conspiracy against Turkish military.

Fourteen days after it ran the story, the police raided Nokta’s offices, confiscating all its computers. On 19 April 2007, merely a fortnight after it published the diaries, the final issue of Nokta was published.

The last editor of Nokta was Alper Görmüş who was imprisoned for his journalistic work in 1995. Görmüş later became a contributor at Taraf, where he has had a column since the paper’s inception. When I asked him whether Taraf had contributed to the extension of freedom of expression in Turkey, he said the paper was a living example of “how it is impossible to achieve freedom of expression without a fight.” 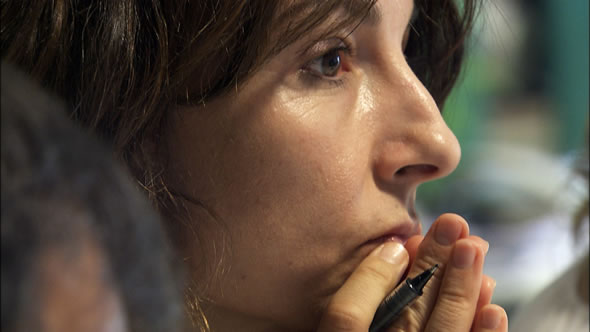 Görmüş praised Altan and Çongar’s journalism and said theirs was an example of journalistic courage which brought an end to the conformity among many high profile figures in the Turkish media. “Five years ago there was a consensus among journalists that certain stories were not allowed to be reported. This confederacy of silence created a comfortable setting for journalists who didn’t do their job properly,” he said. According to Görmüş, it is the task of the journalist to expose secrets, and state secrets for that matter.

“Many writers feared the might of authorities and so they imposed self-censorship,” he said. “So, when Taraf exposed state secrets, its editor Altan was quickly labeled as a ‘traitor’ in mainstream media.”

When I spoke to Taraf columnist Yıldıray Oğur, previously an editor at the newspaper, he mostly agreed with Görmüş’s views. He described Taraf as Turkey’s first truly liberal newspaper. “In its five year long history, the contributors of the paper had included liberals, Islamists, socialists, social democrats, Kurds, headscarved women, Armenians, Jews, Greeks, Americans, Germans, theologians, transvestites and an eighteen year old girl. This is something unprecedented in the history of Turkish journalism,” he said.

However, not everyone is a Taraf fan. Esra Arsan, an associate professor of journalism at Istanbul’s Bilgi University, said Taraf’s initial support for freedom of expression had waned in time. Arsan said the paper remained silent when court cases following Nokta’s and Taraf’s exposés of coup diaries extended to journalists and media workers. “When you look at how they behaved when Ahmet Şık and Nedim Şener were arrested, it must be said Taraf has a regrettable record,” she said. “They didn’t sufficiently criticize the government when it arrested journalists en masse. Instead they went along with the argument that problems about due process of law were an extension of Turkey’s law system. They published transcripts which were illegally obtained by the police, which is not ethical.”

According to Arsan, Taraf should have been more careful in its exposés of secrets, especially in cases when the material used in its pages violated privacy of the accused individuals. She also said Taraf contributed to the legitimisation of abuses of individual freedoms because it collaborated with state prosecutors and police officers while reporting on the coup cases.

Lately it wasn’t only the generals implicated in the coup trials who found fault with Taraf’s editorial line: prime minister Recep Tayyip Erdogan himself became the focus of Taraf’s intense criticism. In his daily articles, Altan portrayed Erdoğan as a figure similar to Vladimir Putin.

Altan’s criticisms were so passionately written and so hectoring in their tone, that when he announced his resignation, saying he wanted to write a new novel, there were articles in the Turkish press that argued Erdogan had lost his greatest, and most talented, critic.

Amberin Zaman, The Economist’s Turkey correspondent, wrote a eulogy for Taraf where she claimed Altan’s pieces had functioned as a lightning rod for other writers who found it much easier to write articles critical of Erdogan after Altan led the way.

“From now on, the most minuscule of criticisms against the state will be problematic,” she wrote.

But according to Oğur, after Taraf’s five year long history of journalism, it is no longer possible for either politicians or generals, to be immune from the scrutiny of the press. “Taraf had torn apart the curtain which protected the state apparatus,” he said. “And there is no turning back.”