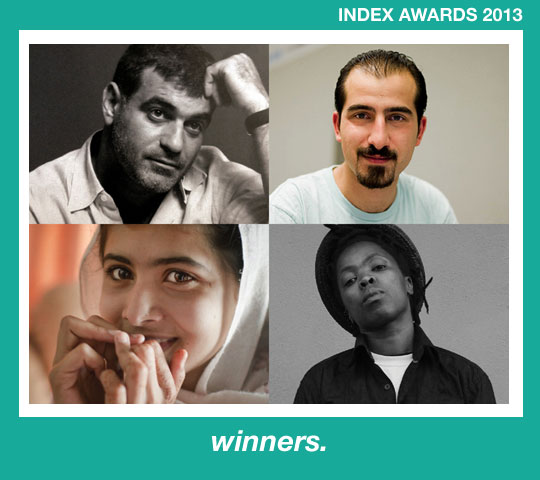 The ceremony was hosted by Index’s Chair Jonathan Dimbleby who dedicated the evening to, ‘a celebration of freedom of expression – that fundamental human right to write, blog, tweet, speak out, protest and create art and literature and music’.

Index CEO Kirsty Hughes said: ‘This year’s winners have shown incredible bravery and courage in the face of extreme adversity – they are an inspiration to all of us who value free speech.’

In the keynote speech, actor Simon Callow declared that ‘the price of liberty is eternal vigilance – Index on Censorship pays that price’. Fellow actor Juliet Stevenson also addressed the ceremony saying: ‘the right to free speech depends on speaking about that right and arguing for it – that’s what Index does’.

These were the last awards as Index Chair for Jonathan Dimbleby. He introduced incoming Chair, journalist David Aaronovitch, who said about his new role: “The world is changing rapidly and we are, perhaps more than ever, confused about free expression and in danger of surrendering it. That’s why I am honoured to become Chair of Index on Censorship, which challenges threats to free speech, day in day out.”

THE WINNERS
Doughty Street Advocacy award: Malala Yousafzai
In October 2012, a Taliban gunman shot education campaigner Malala Yousafzai in the head and chest for her activism, as she was returning home from school in Pakistan’s Swat district. After months of treatment, she returned to school in Birmingham earlier this week. The schoolgirl’s father, Ziauddin Yousafzai, accepted the award on his daughter’s behalf saying: ‘I want to give a message to the world. I didn’t do anything special. As a father, I did one thing, I gave her the right of freedom of expression. All fathers and mothers, give your daughters and sons freedom of expression. Freedom of expression is a most important right. The solution of any conflict is to say the right thing, to speak the truth.’

Journalism award sponsored by the Guardian: Kostas Vaxevanis
Greek investigative journalist Kostas Vaxevanis was arrested in October 2012, days after he published the “Lagarde List” of wealthy Greeks with Swiss bank accounts in his weekly magazine Hot Doc. He was found not guilty of breaking data privacy laws in November 2012, but the Athens public prosecutor subsequently ordered a retrial. Accepting the award, Kostas said: ‘Journalism has been either invested with magic powers, or has been blamed for everything. Both positions are wrong. Journalism is the way, lonely most of the times, of truth.’
Read Kostas Vaxevanis’s acceptance speech at Comment is Free

Digital freedom award sponsored by Google: Bassel Khartabil
Palestinian-born Syrian software engineer Bassel Khartabil is a champion of web freedom and a computer engineer, who specialises in the development of open source software. Khartabil has been held in prison in Syria for over a year. Accepting the award on his behalf, his friend Dana Trometer said: ‘Bassel is aware of this award and he would like to thank the judges and audience for trusting him with such an honour. He would also like to pay respect to all the victims of the struggle for freedom of speech, and, especially for those non-violent youths who refused to carry arms and deserve all the credit for this award.’
Read Google’s William Echikson on Bassel Khartabil

Index Arts award: Zanele Muholi
South African photographer and LGBT activist Zanele Muholi challenges traditional perceptions of the black female body — and specifically black lesbians — through her work. She has faced considerable opposition in South Africa where lesbians have been the targets of horrendous hate crimes including murders and “corrective rape”. Dedicating the award to two friends who were victims of hate crimes and later succumbed to HIV complications, Muholi said: ‘To all the activists, gender activists, visual activists, queer artists; writers, poets, performers, art activists, organic intellectuals who use all art forms of expressions in South Africa. The war is not over till we reach an end to ‘curative rapes’ and brutal killing of black lesbians, gays and transpersons in South Africa.’
Read more about Zanele Muholi in the Guardian