The former journalist asks not to use his real name. So I will call him Francisco. He had been at the height of his career in 2007, in the vibrant city of Torreon, in northern Mexico, when he received a call from an unknown man, Ana Arana reports.

The man said he wanted to drink “lemonade” with him, slang he knew drug traffickers used when they wanted to discuss something with journalists. The journalist drove to a meeting place outside the city. There he found other colleagues who had also been summoned. The man showed them a newspaper story. “Here you say we fled a scene,” he said angrily, “we never flee, we are not cowards, and you can’t use that word to describe our activities,” he emphasized, showing the story in a newspaper. 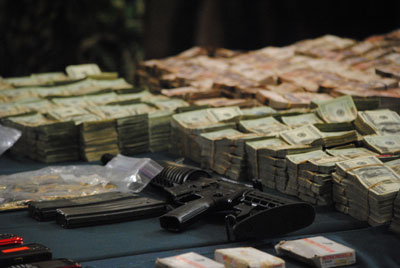 It was the first meeting the Zetas called with the press in this industrial town, and so began a surreal confrontation between the media and the Zetas. Between 2007 and 2012, violence ebbed up and down forcing journalists to adjust to another reality. The Zetas came into town and engaged in a demented fight with the Sinaloa Cartel which considered Torreon part of their territory. The fight for Coahuila focused on Torreon. However, if you read the newspaper you did not understand what was going on. The news accounts had no explanation and little context. There were no follow ups. There was a reason. It was “lemonade”.

Demands from organized crime groups to publish stories a certain way shot up. Reporters were told what to do. They passed on the instructions to the editors. Some papers were hit more. The Zetas grew in importance because they attracted local people into their ranks. “They placed some of their people in the media. They knew who we were, what we wrote,” says the reporter. There is the story of a freelance photographer who worked for a local newspaper but was in reality a local capo, says the reporter.

Torreon was one of several regions in Mexico that faced those dangers. When they first arrived in Torreon, the Zetas worked for the Gulf Cartel, an old line organized crime group with origins in the liquor smuggling networks of the 1930s that took advantage of prohibition laws in the United States. The Gulf Cartel was led by Osiel Cardenas, a man who was extradited to the United States in 2007, but who taught them how to exert complete control over the press. But soon the students, the Zetas, broke off with the Gulf group and overtook their teachers, improving on their methods.

“We had had organized crime operating in our state and in the city, but they never took such a violent stand against the press,” says the journalist. In a way, these parts of Mexico had always grown near organized crime groups that moved drugs across Mexican soil to the United States. Torreon sits on a smuggling corridor that leads to southern Texas. Nearby Gomez Palacio, in Durango State, is allegedly controlled by the Sinaloa Cartel. However the other drug groups did not engage against the press, the reporter says.

Soon, violence in Torreon skyrocketed. The new traffickers brought people from their stronghold in Taumalipas, and managed to also create a local drug market. At the height of their power, the Zetas had about 800 small drug retail stores—which is basically one person that sells cocaine, marijuana and amphetamines. They engaged local gangs to become “halcones” or lookouts.

In 2009, the Zetas kidnapped and killed reporter Eliseo Barron. That murder further paralyzed many reporters, says the journalist.

For Torreon residents, 2010 was the worst year. There were several attacks against local bars and nighclubs, where Zetas and the Sinaloa gangs shot up with high power rifles against patrons. Police say the bars were linked to either group and they were tit for tat incidents. Several dozen people were killed in the attacks and night life practically ended in Torreon. It has barely returned, and only in very localized areas.

Then in 2011, there was the attack against a local municipal police patrol, outside the city’s soccer stadium, which was broadcast across the world as soccer fans crouched under their seats as they heard the shots believing there were snipers inside the stadium. People were jittery.

The worst year of violence was 2012, federal police and military descended in Torreon to help the beleaguered local municipal and state police. There were more than thousand homicides, with most of them related to organized crime, way up from the 87 that occurred in 2007. Federal and military units began patrolling the streets and focused on direct attacks against drug cartel leaders. as federal forces and local police focused against the Zetas leadership and the cartel retaliated.

El Siglo de Torreon, an influential and critical daily managed in the middle of the violence. It was attacked a couple of times at the onset of the violence. But its editor Javier Garza continued to talk about journalism and reporting in the city. Then this year, 2013, as the violence had tapered off, in parts thanks to continued patrols by federal police, military and local police, El Siglo was attacked. Three times its installations were shot at. And then five of its employees were kidnapped for several hours.

“We don’t know what caused the kidnappings, but they worried us because they affected workers who were not reporters” says Garza, who is less articulate about his newspaper’s coverage. “It made us redesign our editorial coverage of violence.” In March, the military arrested the suspects who allegedly attacked the newspaper and kidnapped its employees.

Local police and government officials say Torreon is now at peace. The Zetas have moved to other parts of Coahuila state, say authorities. Sinaloa, they claim is in Durango, next door. During a recent three day visit, constant patrols by heavily armed military and federal police punctuated the calm in city streets. Violence has gone down, although common crime has shot up, including armed robbery, violet car theft and burglaries, which local authorities say it is a reflection on how the local gangs has disbanded and are trying to survive. “We don’t know how the peace will develop”, says a local resident who added that “I will wait until June and July, which are traditionally the most violent months, to determine is peace has returned to Torreon.”