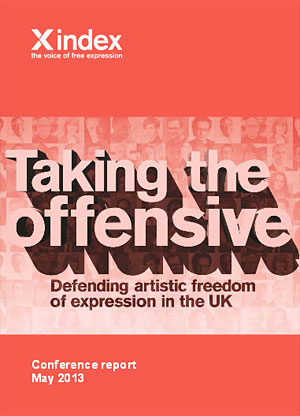 Read the full conference report here or download in PDF

Widespread self-censorship and fear of causing offence is suppressing creativity and ideas in the United Kingdom, according to a conference report published by Index on Censorship.

The conference was hosted by Jude Kelly, OBE, artistic director of Southbank Centre. The keynote speech was delivered by Nicholas Serota, director of Tate. It brought together arts leaders with senior police, lawyers, media and internet executives, religious commentators and arts funders to explore challenges to artists and the growth of self-censorship in contemporary culture.

There are multiple pressures on artistic freedom of expression and censorship has become a major issue for the arts sector in this country, the report reveals. Among the key findings:

Some of the pressures on artistic free expression in the UK can be explained by a climate of caution and security consciousness.  A preoccupation with risk assessment in arts organisations and public institutions, including the police, can lead to a prevalence of uncontentious, safe programming that limits both the range of voices and the space for artistic expression.

Throughout the day-long conference, there was a recurring call for programmers and producers to reclaim controversy; to embrace the disagreement and discord that is inherent to art work that engages with socially sensitive subjects.  Many participants stressed the importance of art that explores challenging questions and the contribution that debate, generated by artwork, makes to democracy.  Greater transparency about decision making, greater co-operation between organisations and more open debate with the public were seen as key components to any strategy to reinforce support for freedom of expression.

The full conference report is available in PDF or online here