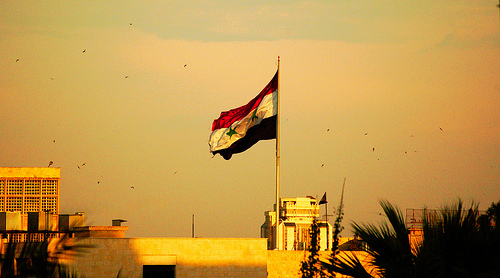 Five members of the Syrian Centre for Media and Freedom of Expression (SCM) are scheduled to appear before the country’s Anti-Terrorism court in Damascus on 19 May. Three of the activists, SCM’s head Mazen Darwish, blogger Hussein Gharir, and activist Hani Zaitani have been held in prison since February 2012, when Syrian security forces attacked and raided the organisation’s offices. Abdel Rahman Hamada and Mansour Omari were conditionally released earlier this year. Syria’s Air Force Intelligence has accused the five activists of “publicising terrorist acts”, under the country’s Anti-Terrorism law.

A group of 19 international organisations today called for the release of Zaitani, Gharir, and Darwish, and for the charges against all five to be dropped. If convicted, they face up to 15 years in prison. According to a statement released today, Syria’s Justice Minister earlier this month promised the release of SCM’s three jailed members — in addition to 69 other jailed activists.

SCM member Maha Assabalani, who was avoided being imprisoned during the raid, wrote about her colleagues for Index last year. She said that her colleagues are in prison for fighting for freedom of expression — and that they “risked their life fighting for real change.”  She also said that Darwish regularly told the organisation’s staff that “there are not enough prisons for the free word.”