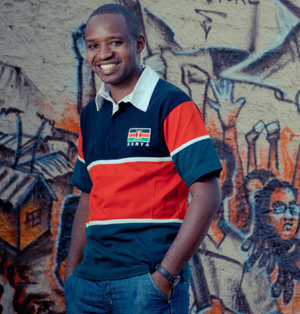 Boniface Mwangi is an award winning Kenyan photographer and activist.  During the 2007 post-election skirmishes he took thousands of photos. His coverage of those attacks entailed great danger as, more often than not, he had to falsify his ethnic identity. In 2009 he founded Picha Mtaani, the first-ever street exhibition in Kenya which was held in towns across the country, showcasing the post election violence photographs to a wider audience beyond Nairobi.

Mwangi has been recognized as a Magnum Photography Fellow, Acumen Fund East Africa Fellow, TED Fellow, and twice as the CNN Multichoice Africa Photojournalist of the Year, among other awards. He currently runs Pawa 254, a collaborative hub for creatives in Kenya. Mwangi recently received the Prince Claus Award 2012 and is now a senior TED fellow.

Mwangi was interviewed by Index on Censorship Head of Arts Julia Farrington at an arts event in Ethiopia in July.

Index: How would you describe Kenyan government’s position on freedom of expression?

Mwangi: Recently the president and deputy president had a media breakfast and invited all the top editors and bloggers, writers at the state house to a meeting.  This is unheard of, it has never happened before.  The new government is being advised by a British firm advising – it was actually the same firm that advised the US government on how to deal with insurgency in Afghanistan.  They are a very smart PR company, they know how to package lies and make it look like the truth, they know how to package crap and sell it to the electorate.   At the moment there is a communication bill that is going through parliament which goes against freedom of speech and when they met, the media said they want self-regulation, they don’t want to be regulated by the state.

But beyond this censorship in Kenya is by choice – it is because of the owner’s business interest; they don’t upset the system because they are going to lose business, lose money.  The biggest advertisers in the country are the government and the bigger corporations.   Editors know as long as they go on the path of truth, they won’t sell advertising space.  They spend so much money on advertising – so it is more self-censorship than anything else.

Kenyan journalists are poorly paid. They are paid by story and the money is very little which makes them easy to be bribed, corruptible.  If you work in the rural area you have no transport and to get around you rely on the local police to give you a ride or the local politician or drug lord and you get compromised in the process.  I worked for five years I know how it works there is a lot of brown envelopes exchanging hands, depending on who is who.  And sadly no-one talks about corruption in the media.

Index: You are saying media is compromised but it is essentially independent?

Mwangi: It is independent – there is very little government interference. It’s almost non-existent – they know the media is controlled by interest. Not a single journalist is in jail at the moment. In the previous government there were a lot of libel suits that were awarded to politicians, actually a ridiculous amount of money was involved, but that has stopped.

The other thing is the emergence of bloggers and citizen journalists who can write about anything, which is actually a good and a bad thing because they can write about rumours and attack people’s lives.  But sometimes they can become an alternative channel for communication. I have seen a lot of stories that have not made it into the mainstream media, but if you go on line or if you buy the tabloids, it may be exaggerated but there may be some truth in it.

Index: How would you describe the Kenyan’s people’s appetite for freedom of expression?

Mwangi: Kenyan people do not want to fight for their freedoms, they want activists to do it for them, so it is only a minority who are fighting for these rights.  There is this wait and see approach on these issues, and it hurts the whole country.  Kenyans have all grown up with parents who told them, don’t protest you are going to get arrested, and that fear has been carried out to this generation.  There is the lock in the mind of Kenyan people that says we can’t do this, it isn’t possible it is too scary, too daring and dangerous to do it.  If you don’t overcome that fear it is going to be passed on to my kids and my kids’ kids so that is what we are trying to do, to give people courage.  Our acts of courage are trying to get the people to protest and resist injustices with confidence that nothing bad will happen to them.

Mwangi: We are always going for the shock effect.  The shock effect says that if they can do that then other people can do some smaller than that.  It has an influence – if I can do it you can do it.

Index: You don’t think it alienates?  People could say those guys are crazy?

Mwangi: I don’t think many people think we are crazy – maybe some upper class people and some politicians.  But the people understand where we are coming from and they understand our anger and given the chance they would also do extreme things, but they are actually afraid.

Index: Do you think that part of what you need to do is to test the boundaries of the law especially in the context  of the new constitution?

Mwangi: We need to do that for Kenyans because we have some over-zealous police officers who arrest and charging people using non-existent laws . So it is important that people understand their rights. And the police should be educated on the bill of rights so that they don’t infringe on Kenyan’s rights.

Index: Some say freedom is a luxury, let’s get people housed and educated first and then let’s turn our minds to freedom of expression.  What do you think?

Freedom is good – it gives human beings dignity, with freedom you can do what you want – it means you can challenge authority, you can give feedback to the government about how you feel.  So if you look at a dictatorship most of them stagnate because there is only one thinker amongst a population of many people. That one thinker cannot be omnipresent then you find that there is a shortage of ideas and a want of thinking.  So freedom of expression is key to life and to democracy. It has to be there at the start  – it is like life.

Index: This space which you have created – is it for a planning space for activists?  Or it’s a public space? Or it’s both.

Mwangi: It is a space for creatives where we people share plan events, protest, a place where people discuss.  So it’s a place where you can come in any time and discuss, read a book, come in anytime and do a grafitti or just chill or read a book. It’s called PAWA 254.  Creatives, activists, journalists and film-makers, guys and women who are like minded who have a real job or a real career but they want a place where they can come and meet like-minded people and discuss.

It is open every day, we plan for it to be open 24 hours per day. And the debate nights are every Tuesday and other days we have different activities where we train activists, photographers, animators or cartoonists – different trainings going on at any given time.

Index: The authorities know you are there.  Do they let you get on with it?

Mwangi: The thing is we have a very progressive constitution if you come to my property they need to have a search warrant or a warrant for my arrest.  They can’t just come and ask questions.  They have to read me my rights.  That is actually something that doesn’t happen in this continent but Kenya has a very progressive constitution, which if everything was working could make it a beacon of democracy and human rights.