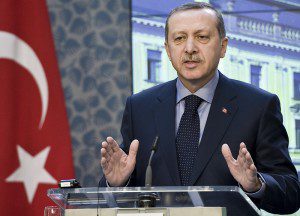 Yet  the mass prosecutions and heavy sentencing under the so-called Ergenekon case in Turkey do not simply show a welcome assertion of civilian over military power. Nor does the military’s role in Egypt constitute what US secretary of state John Kerry rather remarkably referred to a week ago as “restoring democracy” – contradicted this week by John McCain for the first time calling the coup a coup.

Both Turkey and Egypt have failed so far to find a way to reconcile democracy, Islam, and the role of the military. And while a big segment of the Egyptian population is now rashly putting its faith in its army to lead it to a fully functioning pluralist democracy, Turkey’s recent past shows precisely why that might result in modernisation but not democracy.

Yet the recent protests in both countries also show that majoritarian democracy, without respect for the rule of law, human rights, and media freedom, will not lead to a fair, open and stable democratic system either. Where Turkey was once seen as the poster boy for democracy in a Muslim majority country, that picture is now truly tarnished. But the route via military power will never make a good alternative model.

The Military and Kemalism

Turkey for decades followed a path – led by its military and various Kemalist and secularist supporters – of modernisation and westernisation, a sort of quasi-democracy with the military there as a ‘guard rail’ against Islamists and other ‘enemies’ of the state. This army-protected approach did little to propel democracy though it led to some substantial economic and social modernisation especially in the west of Turkey (though its neglect of the smaller businesses of central Anatolia was one part of Erdogan’s remarkable success when he swept to power in 2002).

But, without proper political accountability or a genuinely independent judiciary and free media, corruption and the ‘deep state’ grew and prospered in Turkey tying together a range of unlikely bedfellows, while labelling as dangerous enemies a range of people from Islamists to Kurds, leftists and Alevis with civil society, academics and independent journalists seen as at best deeply suspicious too.

Turkey’s last military coup was in 1980 but the so-called ‘soft coup’ of 1997 pushed the Justice and Development Party (AKP)’s predecessor out of power. Frustrated and oppressed by military-backed politics, when Erdogan’s Islamist-leaning AKP came into power in 2002, many liberals welcomed it as heralding and introducing major steps forward in starting to create a genuinely pluralist democracy, one that would respect minorities, seriously tackle Turkey’s appalling record of torture, and open up the prospect of finally replacing the 1982 military-imposed constitution.

The nationalist-secularist deep state was less impressed fearing underlying Islamist intentions. But attempts at an ‘e-coup’ in 2007 (through military expressed disapproval of the Erdogan government) to the attempted banning of the AKP in the ‘judicial coup’ of the following year failed. And so over his eleven years in power, Erdogan has asserted increasing civilian control over the military.

But the over-reach in the Ergenekon trials, with a wide range of observers criticising the politicisation of the prosecution, lack of due process, and the severity of the sentencing, some labelling it a witch hunt, suggest a process more of political revenge or what commentator Cengiz Candar labels “civilian authoritarianism” rather than a democratic breakthrough. With only 21 acquitted from 275 defendants, in a very wide set of charges around terrorism and coup plots, the Ergenekon sentences mark a moment of deepening political division in Turkey. The draconian nature of the sentences against several journalists and writers have been severely criticised by Dunja Mijatovic, the OSCE’s freedom of the media representative and condemned by the Association of European Journalists.

As this more authoritarian Turkish democracy has developed over the last five years, Turkey’s media has become ever less independent, ever more crushed or complicit – with more journalists in jail than in China and Iran, and sacking of columnists and editors rife even before the surge in dismissals that followed the recent Gezi Park protests and the Ergenekon imprisonments.

Nor has Erdogan stopped at media pressure and control. Turkey has a weak record on internet freedom too. The European Court of Human Rights ruled in May this year that Turkey’s blanket blocking of sites violated freedom of expression – a ruling that will doubtless not have impressed Erdogan and his ministers who were so outraged by free speech on Twitter and other social media during the recent protests.

But it would be hard to argue that Turkey would be better off today if it reverted to its old, failed ways of military coups and a corrupt, elitist deep state. Turkey needs a truly independent, impartial and honest judiciary, a free, strong media to hold politicians to account, a free and open internet. And it also needs healthy dynamic opposition parties too. Yet the recent mass protests showed only too clearly that the stumbling Republican People’s Party (CHP) has still failed to find a convincing modern democratic voice, even as Erdogan has shifted from progressive to more authoritarian ways. The masses of protesters – looking for a more genuine, pluralist democracy – still lack serious political parties to work through.

It is a vicious circle – as  the lack of dynamic opposition parties interacts with the ever crumbling, no longer independent media, government over-reach and the failure to introduce a modern constitution respecting human rights, free speech, and an independent judiciary.

Any Lessons for Egypt?

It is this sort of majoritarianism democracy, but worse, that Egypt has now supplanted with its own protest-backed military coup. Morsi’s government had lurched into an authoritarianism that went a long way beyond where Erdogan has taken Turkey. Where Erdogan failed to introduce a new constitution, Morsi rammed one through that undermined any hopes of establishing a genuine pluralist democracy with full respect for human rights for all.

But the omens for Egypt’s coup as a pro-democracy move are not good. The military have moved rapidly to restore in full public sight various secret police groups. Muslim Brotherhood politicians, including Morsi, are in jail, protesters have been shot and killed – often in the head or chest in what many have called a massacre. And media are being watched, with those sympathetic to the Muslim Brotherhood closed down or censored. This week 75 judges were questioned about their political sympathies for the Brotherhood – a step the Turkish deep state would have only applauded and concurred with.  The so-called Third Square movement, attempting to create support for a new democratic path that supports neither military nor Morsi, is so far small compared to the other two camps.

The US, EU and Arab diplomats are now stepping in urgently – attempting to stop a lurch into indefinite and widespread violence, and to stop further killings as the Egyptian authorities threaten to close down the two Brotherhood protest camps in Cairo. But today disturbingly the interim presidency said these efforts have failed – more violence may well loom.

In the end both Turkey and Egypt face the same challenge: how to get to a fully functioning democracy, with rights for all not just the majority. It cannot be done through military coups, violence and military-backed modernisation. It cannot be done through street protests alone. And where Erdogan’s AKP in 2002 showed a possible way ahead, that model now lies in tatters as Erdogan has shed his progressive mantle.

Yet the tools and the vital steps are not a mystery; they include a free and independent media, full respect for human rights, an independent judiciary, and a vibrant set of political parties. The political challenge is how to create and defend those tools; that is the big task for progressive civil society and for genuinely democratic politicians in both countries – and for their supporters in other countries.