NEWS
Tadeusz Mazowiecki: "there is nothing real about 'realpolitik'"

Poland's first non-Communist premier died today. In 1995, he spoke to Index on Censorship magazine about his decision to resign as Special Rapporteur of the UN Commission on Human Rights in former Yugoslavia 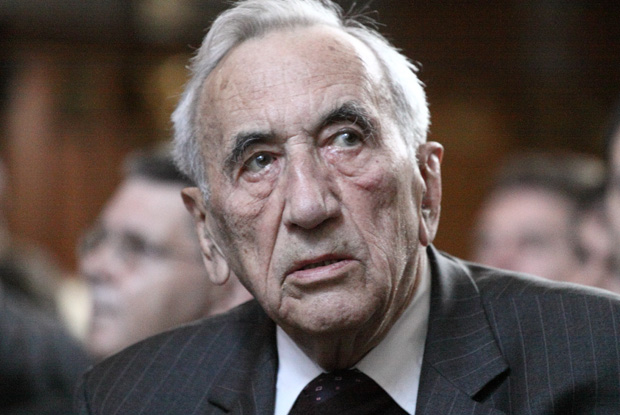 Tadeusz Mazowiecki, Poland’s first post-Communist Prime Minister, died today. In 1995, he spoke to Index on Censorship magazine about his decision to resign as Special Rapporteur of the UN Commission on Human Rights in former Yugoslavia, in protest of the inaction of the international community in the face of the conflict

In 1989 Tadeusz Mazowiecki, a founding member of Solidarity, was elected the first non-Communist premier of Poland. Two years later, after resigning his premiership, he became Special Rapporteur of the United Nation’s Commission on Human Rights in former Yugoslavia. In July this year, in his letter of resignation, he said, ‘One cannot speak about the protection of human rights with credibility when one is confronted with the lack of consistency and courage displayed by the international community and its leaders. Dawid Warsawski talked to him for Index

Following your resignation in the wake of the fall of Srebrenica, you have become a symbol of resistance for critics of the UN mission in Bosnia. Are you comfortable in this role?

I don’t know if it’s possible to feel comfortable as a symbol. The response to my resignation proved that it was a necessary protest. The world had come to accept war crimes as a fact of life. But there were those who found it difficult to understand why rhetoric about human rights and morality wasn’t being reflected in political action. There was a need for some kind of gesture on their behalf.

In an open letter published in La Stampa a few days after your resignation, the Croatian writer Slavenka Drakulic, though respecting your decision, accuses you if betraying the hopes of people in former Yugoslavia who wanted you to be their voice.

I saw this as a serious problem when I was weighing up the options. But I do intend to go on speaking out, and I believe that, for these people too, it was more important to protest than to pretend that nothing had happened. For me, Srebrenica was the last straw. Once again promises had been broken and values betrayed. It is hard to be the voice of hope when one is forced into a posture of complete helplessness.

What powers did the UN mandate give you?

I had the right to analyse and report on all abuses of human rights and humanitarian law. But the recommendations I made in connection with the war touched upon issues that came under the exclusive competence of the Security Council. That was the mandate’s weakness.

Only the Human Rights Commission, which appointed me to this post, was obliged to take account of my recommendations. Extraordinary meetings apart, the Commission meets barely once a year to make a survey of the human rights situation throughout the world. There is little time for detailed examination.

The Security Council drew on my reports, but had no obligation to take account of my recommendations. In the course of my three years at the UN, I was invited to a meeting of the Security Council just once, and allowed to make a brief address. My invitation, as Human Rights Commission rapporteur, drew protest from the representatives of China and Zimbabwe. Within the UN structure, the Human Rights Commission is subordinate to the Economic and Social Council – which is far less important than the Security Council. My invitation set a bureaucratic precedent and it must have stirred anxieties. A discussion on human rights in the former Yugoslavia today could mean a debate on China tomorrow.

Did you feel that the UN was giving you firm help and support?

I didn’t; yet people I met on the ground were convinced that the UN was fully behind me and that I could do a great deal within it. This wasn’t exactly the case and made my own position more difficult.

What sort of budget and personnel did you have at your disposal?

Compared to rapporteurs in other countries I managed to secure a considerable amount. I won the right to appoint personnel on the ground, though I didn’t have any influence on their selection. We have representation in Zagreb, Sarajevo, Skopje and most recently in Mostar. But we failed to gain representation in Belgrade because of the attitude taken by the Serbian authorities. My colleagues were able to intervene over some issues (in Croatia, for example). In other cases they were unable to do so because they weren’t permitted to go in by the Serbian side in Bosnia, Croatia, Serbia itself and Montenegro.

What were the financial arrangements?

The appointment of ground personnel overstepped the normal UN budget. The costs were covered by additional funds from state sources, particularly the US government, and by private funds, especially the Soros Foundation. We didn’t know at the end of one year whether funding for the following year would be available.

How do you assess your co-operation with the Bosnian, Croat and Serb authorities on the ground?

Everyone expected me to report on crimes committed by the other sides and preferred me not to note their own human rights abuses. After two visits the Serb authorities began to register great dissatisfaction with my mission – probably because I wrote full and harsh reports about the position of Albanians in Kosovo.

In my dealings with the Bosnian Serbs there were serious problems from the start. During my first visit, when we looked at the explosive issue of the concentration camps, I went to Manjaca. There I had an extraordinary and unforgettable interview with the camp commandant. He addressed me with a mixture of flattery and threats, and the purpose of it all was to prevent me from seeing the prisoners. Later the Bosnian Serb authorities apologised. The fact that I had concluded that the Bosnian Serbs were chiefly responsible for carrying out ethnic cleansing policies must have played a part in this episode, as well as my view that their human rights abuses were the most glaring. The Croatian authorities were ‘generally co-operative’, as they say. But the military authorities did not, for example, put a stop to the expulsion of Serbian families from homes on military property, despite promises to the contrary.

How useful was your own experience as a political prisoner in Communist Poland? I remember an incident in Zenica where prisoners were saying that when the commandant goes home, the guards set about ill-treating them. The commandant denied the allegations, to which you responded that you too had been a prisoner once and fully understood what it meant. His jaw dropped. I imagine he’d never met a former prisoner turned dignitary.

The experience was just as useful when I was formulating my criticisms of the London Conference. Watching its political dynamic I saw a failure to understand who we were dealing with.

For some, it was a political problem, faintly exotic and rather marginal on the world scale. They were working on it without the experience that, at times, there is nothing real about ‘realpolitik’. They showed a lack of readiness to tread the edge of the impossible in politics. In Eastern Europe we have learnt all about this, but it still doesn’t fit into the categories of Western European political thought – even despite the fall of Communism.

What were your relations with the various agencies of the UN?

There was a serious lack of co-ordination between the different agencies of the UN and others – such as the London International Conference on former Yugoslavia – of which the UN forms a significant part. I also had to get used to the fact that UN staff, especially the civilian staff of UNPROFOR were under no obligation to pass on documentation relating to human rights abuses. There was one occasion when vital information concerning a serious war crime (the mass graves at Ovcara near Vukovar) was not communicated to us. I discovered that UNPROFOR personnel had been aware of it, while I found out only at a later stage. Information as important as that should have been passed on.

In general I have the impression that UN structures are not geared to monitoring or counteracting human rights abuses. In my view the UNPROFOR mandate was essentially sick. It was assumed that it was possible to go into a war situation with a peacekeeping mandate. Moreover, the international community made a series of concessions to the Serbs; it was prepared to accept what they had done as a fait accompli. And the Serbs became increasingly less inclined to take account of the possibility that their actions might provoke a strong response. UNPROFOR came to be treated like a hostage, initially in a metaphorical sense and, later, literally. The UNPROFOR mandate was wholly inadequate in these conditions.

What preventive facilities does the UN have? It seems to act adequately In the wake of disasters, but apparently can’t do anything to prevent them.

I agree, but at present the UN has become a convenient whipping boy. Decisions are taken not by the UN but by its member states. The question is do we really want an organisation which would have greater powers? Personally, I was unable to accept the lack of will to action. The UN lacks a clear vision of itself as an organisation and the single- mindedness to realise it the one hand pledges were being made in the name of the UN and on the other the will wasn’t there to fulfil them.

Who lacks the will? Where does the blockage arise?

In my view the UN lacks a clear vision of itself as an organisation and the single-mindedness to realise it. Secondly, the states involved in decision taking have no common political will; there is a conflict of interests. It’s a problem which reaches beyond the Yugoslav conflict. What are the guidelines by which the world is to order itself following the collapse of the geo-political model drawn up at Yalta? The UN was created as an integral part of that model. Do we now want to strengthen and equip it with effective means of action? Or is it to be a political International Red Cross which, though perhaps necessary, cannot promise people any kind o f resolution?

What are your plans now?

I don’t propose to wash my hands of the former Yugoslavia . These three years have been very important to me personally. Elementary human solidarity is also a factor: it’s very hard for me to agree with the view that the Balkans are a traditionally violent region which should be left well alone. Moreover, I firmly believe that we have underestimated the consequences of this conflict and of Europe’s ineffectual response to it for the whole international order.

Dawid Warsawski is the pen name of Konstanty Gebert, a former under- ground activist and journalist involved in Jewish cultural life

This article was originally published in the autumn 1995 edition of Index on Censorship magazine.