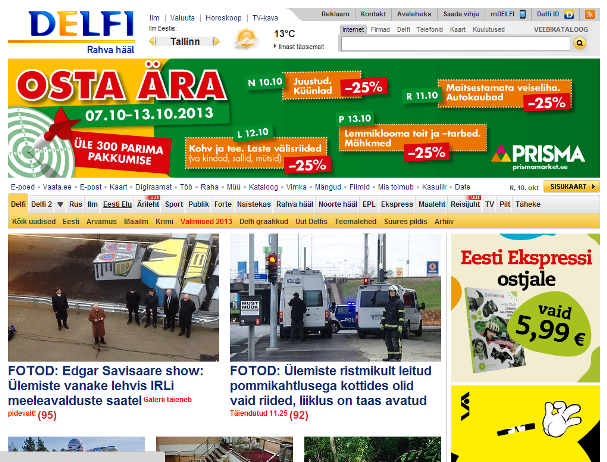 An alarming judgment has been issued by the European Court of Human Rights that could seriously affect online comment threads.

The judgment in the case Delfi AS v Estonia suggests that online portals are fully responsible for comments posted under stories, in apparent contradiction of the principle that portals are “mere conduits” for comment and cannot be held liable.

Further, the unanimous ruling suggests that if a commercial site allows anonymous comments, it is both “practical” and “reasonable” to hold the site responsible for content of the comments.

The ruling concerns a case against Estonian site Delfi.ee. In 2006, Delfi ran a story about a ferry operator’s changing of routes. This story lead to some heated debate in the comments thread, with, according to the judgment “highly offensive or threatening posts about the ferry operator and its owner”.

The owner sued in Estonia, and in 2008, a court found Delfi responsible for defamation. Delfi appealed on the grounds the the European eCommerce Directive suggested it should be regarded as a “passive and neutral” host. The case eventually ended up in Strasbourg.

Today’s ruling contains several alarming lines for anyone who runs a website with comments. For example, the court suggests that:

Given the nature of the article, the company should have expected offensive posts, and exercised an extra degree of caution so as to avoid being held liable for damage to an individual’s reputation.”

This is curious: any moderator will tell you that controversial comments can appear in the unlikeliest of places.

The judgment goes on:

The article’s webpage did state that the authors of comments would be liable for their content, and that threatening or insulting comments were not allowed. The webpage also automatically deleted posts that contained a series of vulgar words, and users could tell administrators about offensive comments by clicking a single button, which would then lead to the posts being removed. However, the warnings failed to prevent a large number of insulting comments from being made, and they were not removed in good time by the automatic-word filtering or by the notice-and-take-down notification system.”

This seems to suggest that Delfi’s attempts to make to filter vulgar content and remind commenters of their liability have actually been used against them. Even the reporting system is not enough for the court.

Perhaps most worryingly, the judgment delivers another severe blow to online anonymity:

However, the identity of the authors would have been extremely difficult to establish, as readers were allowed to make comments without registering their names. Therefore many of the posts were anonymous. Making Delfi legally responsible for the comments was therefore practical; but it was also reasonable, because the news portal received commercial benefit from comments being made.”

It is difficult to see how any site would allow anonymous comments if this ruling stands as precedent.

This would appear to be truly troubling judgment for website operators and moderators.

The ruling is not yet final and may be subject to further review.

This article was originally posted on 10 Oct 2013 at indexoncensorship.org