NEWS
Egypt tense as Morsi trial gets under way

Journalists were attacked by pro-Morsi protesters as the trial of the deposed president and 14 other Muslim Brotherhood leaders opened in Cairo on Monday morning. 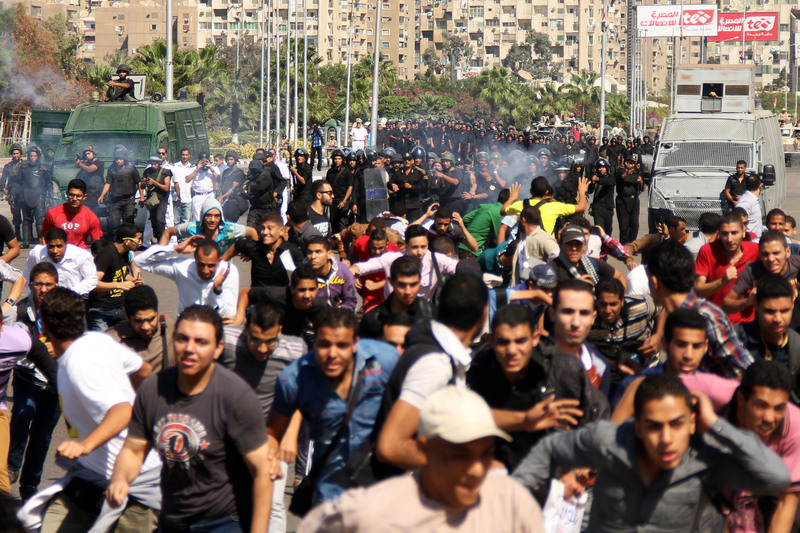 Students from the Al-Azhar University clashed today outside the University campus, in Cairo, after staging a anti-military protest. At Cairo University Morsi and Anti-Morsi supporters also scuffled. Photo: Demotix

As the trial of deposed President Mohamed Morsi and 14 other Muslim Brotherhood leaders opened in Cairo on Monday morning, the tension on the streets of the Egyptian capital was palpable.

The Anti-Coup Coalition, led by members of the now-outlawed Muslim Brotherhood, had earlier called for nationwide street protests including rallies outside the building in Tora, south Cairo where the trial was to have taken place. In an effort to avert violence however, the authorities on Sunday afternoon announced a change of venue , saying the trial would instead be held at the Police Academy in the Fifth Settlement district in eastern Cairo. The Interior Ministry has meanwhile beefed up security across the city, deploying some 20,000 riot police to guard the courthouse. Despite the heightened security, a fresh outbreak of violence seems inevitable with clashes between security forces and the Islamist protesters widely anticipated.

Since the ouster of the Islamist President by a military coup in early July, about 1,000 people have been killed in nationwide clashes and more than 2,000 others have been arrested in a brutal security crackdown on the now-banned Islamist group from which the toppled president hails. Essam Al Erian, Deputy leader of the Freedom and Justice Party, the Muslim Brotherhood’s political wing, was arrested in Eastern Cairo’s suburb of the Fifth Settlement on Wednesday. He faces detention for thirty days on charges of ” inciting murder of the group’s opponents” during protests staged in Giza last July that left 9 people dead.

Al Erian’s arrest sparked a new round of angry student protests at universities across the country, including in Cairo and Alexandria. Al Azhar University in Cairo was the scene of some of the worst violence. Thousands of angry pro-Morsi students demanding ” the reinstatement of the legitimate president” stormed the university’s administrative building , smashing windows and besieging the offices of the university’s chief and other administrators. While some clerics and professors at Al Azhar support the Muslim Brotherhood, most of the university’s administrative staff have generally toed the government line. Forty-four students were arrested for “rowdy behaviour” during Wednesday’s protests . They insisted however, that their protests were “peaceful”, saying “infiltrators” had been sent by security officials to create mayhem so as to justify their arrest.

Meanwhile, 22 young women members of the Muslim Brotherhood were arrested on Thursday on accusations of “disrupting traffic during protests, distributing illegal leaflets and being members of an outlawed group.” Members of the group who spoke to Index on condition of anonymity, said the charges were “politically-motivated” and were “an attempt to silence dissent ahead of Morsi’s trial”.

The latest arrests are likely to fuel the already high tensions between Muslim Brotherhood supporters and the army, accused by rights groups of ” rights abuses and authoritarian measures that will drag the country back to the pre-January 2011 police state.” Since Morsi’s ouster, the country has seen the reimposition of the 30 year-old state of emergency (which prevailed under toppled president Hosni Mubarak) and the return of state security. A night time curfew, in place since mid August, is affecting the livelihoods of millions of Egyptians, many of whom are accustomed to working night shifts. Meanwhile , a draconian protest bill , currently under review by the interim president, will–if signed into law–restrict the right to protest, granting the interior ministry the authority to prevent and abolish protests and marches while completely criminalizing sit-ins. Furthermore, the 2012 constitution, currently being amended by a panel of liberals and leftists, reportedly grants the military special privileges. Shielding the army from accountabilitiy and preserving military trials of civilians, the new constitution thus guarantees that the army will remain ” a state above the state”, warns Political Scientist and rights activist Amr Hamzawy in an article published this week in the Atlantic Council.

All the above measures signal a reversal of the gains made since the January 2011 uprising that unseated authoritarian president Hosni Mubarak. But the biggest loss perhaps, has been the reinstatement of the culture of fear.Ironically, leftist and liberal parties and movements that joined the uprisings against both Mubarak and Morsi, have turned a blind eye to the rights abuses practiced by the de facto government against Islamists. Worse still, some liberals have at times, even condoned the repression citing “national security concerns”. Such a complacent attitude spells the demise of the nascent democratic movement in Egypt even before it takes off the ground, warn the analysts. ” In justifying authoritarianism, Egypt’s liberals have abandoned the principles and values of democracy, compromising their moral and political credibility and accepting the disappearance of humanity itself ,” laments Hamzawy.