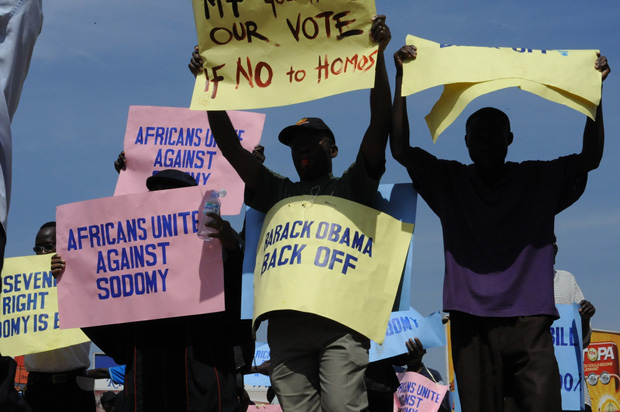 The Ugandan government’s position on homosexuality is considered one of the harshest in the world. The proposed Anti-Homosexuality Bill, seeks to, among other things, broaden the criminalisation of homosexuality so that Ugandans who engage in same-sex relations abroad can be extradited to Uganda and charged. Originally, some of the provisions in the law called for death penalties or life sentences for those convicted as homosexuals. It has since been amended to remove the proposal of death penalties, but the life sentences remain.

A special motion to introduce the legislation was passed only a month after a two-day conference where three American Christians asserted that homosexuality is a direct threat to the cohesion of African families. Indeed, the church — both Anglican and Catholic — plays a big role in shaping the government’s tough stance on homosexuality. New Pentecostal churches are also fuelling the anti-gay message, with firebrand crusaders like Pastor Martin Sempa at the forefront.

Together, the state and the church accuse the gay community of recruiting young people in schools. There have also been claims that gay people are recording sex videos with young Ugandans that they then sell abroad. It is said that young people are lured into this with promises of financial gains. Sixty-five-year-old Brit Bernard Randall is facing trial for engaging in gay sex, and for possession of videos of him engaging in gay sex.

Anti-gay legislation has been in place in Uganda for some time. Laws prohibiting same-sex sexual acts were first introduced under British colonial rule in the 19th century, and those were enshrined in the Penal Code Act 1950. Section 146 states that “any person who attempts to commit any of the offences specified in section 145 commits a felony and is liable to imprisonment for seven years.” On 29th September 2005, President Museveni also signed a constitutional amendment prohibiting same-sex marriages.

But the anti-gay bill is not the only story on this topic to come out of Uganda in recent times. In 2004, the Uganda Broadcasting Council fined Radio Simba $1,000 for hosting homosexuals on one of its shows, and the radio station was forced to make a public apology. In January 2011, LGBT activist David Kato was killed. Kato, together with Patience Onziema and Kasha Jacqueline, had successfully sued a Ugandan paper the Rolling Stone and its Managing Editor Giles Muhame. The paper had published their full names and photos, as well as those of a number of other allegedly gay people and called for the lynching of all homosexuals. The court issued a permanent injunction preventing the paper and the editor from publishing the identities of any other homosexuals. Kato’s murderer, Enoch Nsubuga, was handed down a 30-year prison sentence.

On 3 October 2011, a local human rights and LGBT activist challenged a part of the Equal Opportunities Commission Act in the Constitutional Court. Section 15(6)(d) prevents the Equal Opportunities Commission from investigating “any matter involving behaviour which is considered to be (i) immoral and socially harmful, or (ii) unacceptable by the majority of the cultural and social communities in Uganda.” The petitioner argued that this clause is discriminatory and violates the constitutional rights of minority populations. A decision has not yet been made on the petition.

The bill has, however, caused the most outrage. The Ugandan government and the evangelicals faced immense international criticism, and the bill was met with protests from LGBT, human rights and civil society groups. Countries including Sweden even threatened to stop their aid to Uganda in protest.

In response to the attention, the bill was revised to drop the death penalty, and President Yoweri Museveni formed a commission to investigate the possible repercussions of passing it. The Speaker of the Ugandan parliament promised in November 2012 the bill would pass by the end of the year as a Christmas gift for the group that supported it. It is, for now, still on hold. But while the Ugandan government has toned down its rhetoric against the gay community lately — this is believed to be due to international pressure — the persecution of gay people in the country persists.

One response to “Uganda’s shocking record on gay rights”