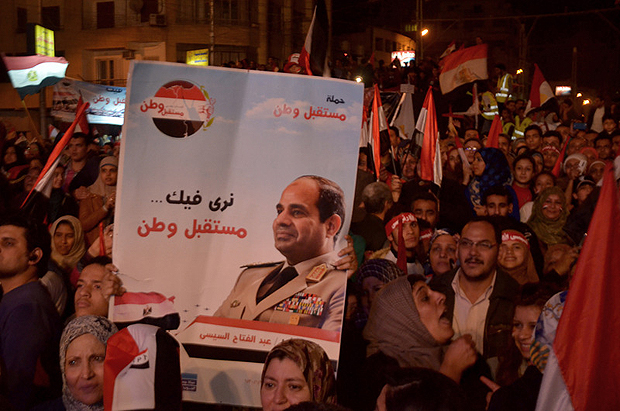 As thousands of Egyptians demonstrated in support of the country’s military, journalists were attacked, 49 people were killed and 247 others were injured in anti-government marches across Egypt on Saturday on the third anniversary of the uprising that led to the overthrow of autocrat Hosni Mubarak.

The figures were announced by Egypt’s Health Ministry but Al Nadeem Center, a Cairo-based rights organization, gave an even higher death toll, adding that more than 1,000 people had been arrested in a day of violent clashes between protesters and security forces.

Still, a significant number of Egyptians refused to let the violence dampen their celebratory mood. Thousands of flag-bearing revellers flocked to Cairo’s iconic Tahrir Square on Saturday to rally in support of the army. Raising pictures of Defense Minister General Abdel Fattah El Sisi , they called on him to run for the presidency, chanting “El Sisi is our president” and “the people, the army and the police are one hand”.

Three years after the mass protests demanding an end to Mubarak’s police state system, the revelry and nationalistic fervour demonstrated a reversal in public sentiment towards the military and the police, which were perceived in a negative light during the transitional period that followed the ouster of Mubarak. It also underlined the bitter polarisation in the country.

“The people want the execution of the Muslim Brotherhood!”, the Tahrir crowd chanted over and over.

Security was intensified after a series of bombings rocked Cairo the previous day — the largest of them a remote-controlled car bombing targeting the security directorate near the centre of the city. At least six people were killed in the bomb attacks and scores of others were injured. Ansar Beit al Maqdis — an al Qaeda-affiliated jihadi group — claimed responsibility for the bombings. The group threatened more violence and warned people to stay off the streets. Many Egyptians dismiss the persistent denials by the Muslim Brotherhood — recently designated by Egypt’s military-backed authorities as a terrorist organization — that the Brotherhood was behind the violence. The Brotherhood insists its struggle is peaceful and has issued a statement on its official website condemning the terrorist attacks. Tens of thousands of riot police and armoured personnel carriers were deployed to try to maintain order and Tahrir Square was ringed by barbed wire to prevent pro-Muslim Brotherhood marchers entering the square.

Supporters of toppled Islamist President Mohamed Morsi staged marches in 34 Cairo neighbourhoods , protesting his overthrow. In a statement published on their website Ikhwanweb the previous day, they vowed to continue their protests until they topple “the fascist coup regime”. Security forces fired volleys of tear gas and gunshots in the air to disperse the protesters. Scores were killed or injured in ensuing clashes with riot police and pro-military residents who hurled stones and bottles at the protesters. Hundreds of demonstrators were arrested.

Pro-democracy activists meanwhile, staged a protest rally outside the Journalists Syndicate in downtown Cairo to express their opposition to authoritarian rule. “Down with military rule and down with the Muslim Brotherhood,” they chanted before being violently attacked by security forces and pro-military residents. The protesters ran for cover amid thick clouds of choking tear gas.

In the mayhem that followed, leftist activist Tarek Shalaby who was among the opposition protesters, sent a message on Twitter advising his comrades to “grab posters of El Sisi to avoid being targeted by riot police.” He also warned others to steer clear of the downtown area, describing it as “extremely dangerous.” For Sayed Elwez, a young member of the April Six group that played a key role in mobilising protesters ahead of the January 2011 uprising, the warnings were too little, too late. He was shot in the neck and chest by security forces while trying to escape. Ironically, Elwez had been among the thousands of secular volunteers in the Tamarod campaign, collecting signatures for a petition calling for Islamist President Mohamed Morsi’s resignation.

In recent weeks, the military-backed government’s brutal crackdown on Muslim Brotherhood supporters has widened, targeting dissenters of all stripes including liberal activists, journalists and prominent academics. Paradoxically, many of those targeted had previously opposed the Muslim Brotherhood president, aligning themselves with the country’s notorious security apparatus to remove him from office.

Two prominent Egyptian political scientists are the latest targets of the crackdown which rights activists say, is aimed at silencing all critics of the military-led authorities. Emad Shahin, an internationally-acclaimed and widely respected academic who has taught at Harvard and Notre Dame has been charged with “espionage and conspiring with foreign organizations to undermine Egypt’s national security”. His name has been added to a list of majority-Brotherhood defendants (which also includes the former President Mohamed Morsi) facing trial on similar charges that some rights activists believe are “politically motivated”. Shahin has denied the charges , insisting that his true offence “was criticism of the political events in Egypt since Morsi’s ouster”.

Amr Hamzawy, another political scientist and former lawmaker has meanwhile, been accused of “insulting the judiciary”. The legal complaint against him stems from a message he posted on his Twitter account in June, in which he criticized a court verdict sentencing 43 NGO workers to one to five year jail terms. The NGO staffers were accused of “working for unlicensed institutions and receiving illegal foreign funding”. Hamzawy described the verdict as “shocking and lacking in evidence and transparency”. The highly-publicised NGO case, also widely criticised by international rights activists, was seen by many as symbolising “a severe crackdown on civil society in Egypt”.

Amnesty International has criticized the widening crackdown on rights activists in Egypt, expressing concern that the Egyptian authorities were “tightening the noose on freedom of expression and assembly”. In a statement released soon after the charges were levelled against Shahin and Hamzawy, Hassiba Hadj Sahraoui, Middle East and North Africa Deputy Director at Amnesty International said “repressive legislation” was “making it easier for the government to silence its critics”. She warned that “with such measures in place” Egypt was “headed firmly down the path toward further repression and confrontation”.

Several prominent pro-democracy activists languish in jail for taking part in ”illegal protests”. Rights advocates say their imprisonment signals the return of Mubarak’s police state and that counter- revolutionary forces are back with a vengeance. In letters of despair leaked from their solitary prison cells, Ahmed Maher and Alaa Abdel Fattah (two symbols of the uprising against Mubarak) speak of a “failed revolution” that has been hijacked first by a religious group, then by the military.

In a letter to his two sisters written earlier this month, activist Alaa Abdel Fattah also wrote: “What adds to my feeling of oppression is that I feel this particular lock up has no value. This is not struggle, and there is no revolution.”

Journalists too have not been spared; in recent months they have continued to face physical assaults, intimidation and detentions. At least five journalists are currently behind bars for reporting on the ongoing political crisis. Three members of an Al Jazeera English TV crew have been in custody for nearly a month pending investigations on charges of “spreading lies harmful to Egypt’s national security and and joining a terrorist group”. In a letter recently smuggled out of his Torah prison cell, Al Jazeera correspondent Peter Greste recounts the ordeal of his two Egyptian colleagues who are being accused of belonging to a terrorist organisation and are held in a high security prison.

“Fahmy has been denied the hospital treatment he badly needs for a shoulder injury he sustained shortly before our arrest. Both he and Baher spend 24 hours a day in their mosquito-infested cells, sleeping on the floor with no books or writing materials to break the soul- destroying tedium,” Greste lamented in his note published on the Al Jazeera English website.

Several journalists covering Saturday’s pro-military Tahrir rallies meanwhile, reported coming under attack from mobs who suspected them of working for Al Jazeera. The Qatari-based network is highly unpopular in Egypt because of what many Egyptians perceive as a pro- Muslim Brotherhood bias in its coverage of the political crisis in Egypt. Meanwhile , the state-run and state-influenced media alike are awash with conspiracy theories and talk of foreign plots to divide and destroy Egypt. This has fuelled the xenophobia in Egypt, posing a serious security challenge for foreign journalists covering the protest rallies. Journalist Nadine Maroushi who was attacked in Tahrir Square on Saturday has shared her traumatic experience on her blog:

“In Tahrir Square yesterday a man suggested we worked for Al Jazeera. An angry crowd quickly formed around us. ‘You traitor, you pig,’ a veiled woman shouted at me. She pulled my hair and grabbed at my scarf, choking me. The police intervened; I showed my press pass. They took us away to a building just off the square and told us to hide there for an hour until the crowd calmed down.”

A message posted by freelance journalist Bel Trew on Twitter on Saturday also warned that Tahrir was not safe for journalists. Trew’s tweet was retweeted more than a hundred times within minutes, triggering a frenzied exchange of telephone numbers to report assault and harassment of journalists. Egyptian photojournalist Mosa’ab El Shamy, meanwhile described it as “horrible day for journalists in Cairo. At least 5 (including a foreigner) were arrested, 2 are in hospital and 7 cameras have been seized by the police and confiscated,” he tweeted.

Three years on, the revolutionary activists’ hopes for dramatic change have all but faded. With the demands for freedom of speech, equality , dignity and an end to police brutality and corruption unfulfilled, the political turmoil and instability of the past three years have forced many Egyptians to drastically lower their expectations. Forsaking their ambitions for freedom and democracy — at least for now — many in Egypt have settled instead for the lesser hope of restoring stability in the country gripped by violence. Stability can only be guaranteed with a return to military rule , they say. But not all Egyptians have given up their revolutionary dream of a free and democratic society. A small but resilient group of young activists that refuses to bow under repression is keeping the dream alive. They are the country’s hope for change. “Today was a harsh defeat on a long and bumpy road,” Tarek Shalaby wrote on Twitter, but there is no going back.

This article was posted on 27 January 2014 at indexoncensorship.org