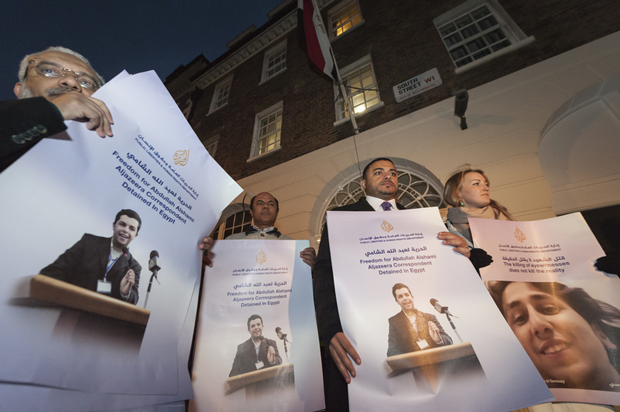 In November 2013, the National Union of Journalists (NUJ UK and Ireland), the International Federation of Journalists (IFJ) and the Aljazeera Media Network organised a show of solidarity for the journalists who have been detained, injured or killed in Egypt. (Photo: Lee Thomas / Demotix)

In a new sign of a regression in press freedom in Egypt, authorities have ordered three journalists working for the Al Jazeera English (AJE) channel held in custody for fifteen days.

The journalists –AJE Cairo Bureau Chief Mohamed Fadel Fahmy, award-winning former BBC Correspondent Peter Greste and producer Baher Mohamed–were arrested in a police raid on Sunday on a makeshift studio at a luxury Cairo hotel. They were charged with “belonging to a terrorist group and broadcasting false news that harms national security .”

Cameras and other broadcasting equipment were seized during the raid on the work room where the AJE TV crew had reportedly conducted interviews with activists and Muslim Brotherhood members on the political crisis in Egypt. A fourth member of the AJE team–Cameraman Mohamed Fawzy–was also arrested but was released hours later without charge.

The latest detentions raise the number of journalists affiliated with Al Jazeera and who are now jailed in Cairo , to five. Al Jazeera Arabic correspondent Abdullah Al Shami was arrested on 14 August while covering the brutal security crackdown on supporters of toppled President Mohamed Morsi at Rab’aa–the larger of two encampments where pro-Morsi protesters had been demonstrating against his forced removal and demanding his reinstatement. Al Jazeera Mubasher Misr Cameraman Mohamed Badr was meanwhile, arrested on 15 July while covering clashes between security forces and pro-Morsi protesters in Ramses Square.

Al Jazeera has denounced the arrests of its staff members as an act designed to “stifle and repress the freedom of reporting by the network’s journalists.” The Egyptian government’s hostility towards journalists affiliated with the Qatari-based network has been prompted by what many Egyptians perceive as “a pro-Muslim Brotherhood bias in the network’s coverage of the events unfolding in Egypt”. Since the military takeover of the country in July 2013, at least 22 staff members have resigned from AJ Jazeera Mubasher Misr, the Egyptian arm of the network , over the alleged “bias in favour of the Islamist group”. Al Jazeera has however, denied the allegation.

The latest detentions are perceived by analysts as  part of the crackdown on the Muslim Brotherhood–the Islamist group from which the deposed President hails. Last week, the group was officially classified as a “terrorist organization” by the Egyptian authorities, in a move criminalizing the group’s activities, financing and membership .

The arrests of the AJE journalists have also raised fears among rights activists and organizations that the government crackdown was “widening to silence all voices of dissent”. Human Rights Lawyer Ragia Omran told the New York Times on Monday  the charges are “part of a pattern of aggressive prosecutions–including conviction of protesters— that were rarely pursued even under Hosni Mubarak.” The New York-based Committee For the Protection of Journalists , CPJ, has also condemned the arrests, calling on the Egyptian government to release the journalists immediately . In a statement released by CPJ, Sherif Mansour, Middle East and North Africa coordinator , said ” the Egyptian government was equating legitimate journalistic work with acts of terrorism in an effort to censor critical news coverage.” In its annual census conducted last month, the CPJ ranked Egypt among the top ten jailers of journalists in the world with at least five journalists languishing in Egyptian prisons. It has also listed Egypt among the three most dangerous countries for journalists in the Middle East after Syria and Iraq . Six journalists have been killed in the country over the course of the past year, three of them while covering the bloody crackdown on Morsi’s supporters at Rab’aa.

Members of Mohamed Fahmy’s family meanwhile used his Twitter account to send a message on Tuesday reminding the government that “journalists are not terrorists.” His supporters meanwhile started a hashtag on Twitter calling for his release. Many of them expressed disappointment at what they described as “the government’s latest act of repression” warning that it would harm the government’s image much more than any amount of critical reporting would.

This article was posted on 2 Jan 2013 at indexoncensorship.org