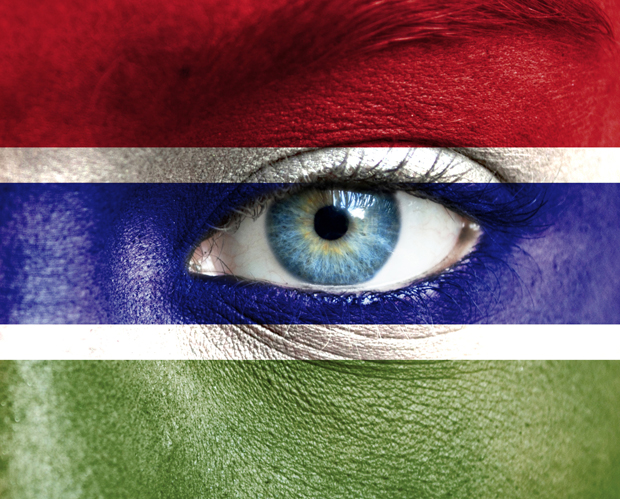 What was seen as a turning point for press freedom in the Gambia has turned out to be nothing more than political gimmicks. Barely three weeks after Gambia’s president Yahya Jammeh announced the lifting of the ban on two private media institutions — the Standard Newspaper and Terranga FM — the government arrested two journalists.

Journalists Musa Sherriff — a Gambia-based Liberian journalist who doubles as editor and publisher of the Voice newspaper — and Sainey Marenah — a freelance journalist — were being held at a police station in Sanyang Village in Kombo South few miles away from the capital Banjul. Both have been bailed as of Friday.

The arrests were made in connection to an article published in the Voice’s 11 December 2013 edition which stated that 19 Green Boys — youth supporters of the ruling Alliance for Patriotic Reorientation and Construction APRC — had defected to the opposition United Democratic Party.

Sherriff and Marenah have been charged under the criminal code with providing false information to the public, according to the Committee to Protect Journalists. “The charges against Musa Sherriff and Sainey Marenah are a reminder that the Gambia government is determined to stamp out criticism and crush the independent press,” said Peter Nkanga of the New York based CPJ’s West Africa consultant. “We call on the authorities to withdraw all charges and release the two journalists immediately.”

Late last year the National Intelligence Agency (NIA) arrested Ebrima Solo Sandeng, the secretary general of the opposition UDP youth wing and seven others. Sandeng and colleagues were charged with “unlawful assembly” following a meeting Tanji in the Kombo District. The police slapped the opposition leader with an additional charge of “giving false information” for saying the police of Tanji that arrested them are the same police who granted them a permit to hold the youth meeting.

A UDP supporter Lasana Jobarteh, who provided network coverage for the online papers at the Serekunda and Brikama rallies in the regional capital of West Coast region, has been picked up by NIA officials. Jorbateh was in a convoy with opposition leaders to and from the Brikama Rally. After eight days of detention at the NIA headquarters in Banjul without access to family and friends, Jobarteh arraigned before Magistrate Ebrima Kijera of the Bundung Magistrates’ Court on Monday, 23 December and charged with broadcasting without license through Skype. He denied any wrong doing.

According a Gambian online newspaper Jobarteh is an IT expert and had worked for the Gambia Radio Television Services (GRTS) as an audio and video expert before falling out with the government. He sued the government for wrongful termination. He reportedly won his case and was compensated for his alleged termination. He briefly left the Gambia for the US and but later returned.

President Jammeh’s earlier announcement on the lifting of the ban on two private media institutions was applauded by the Gambia Press Union and international press freedom advocates, while they also called on the President Jammeh to lift the ban on the Daily News.

Demba Ali Jawo, a Gambian Journalist who is also the former president of the Gambia Press Union welcomed the move but questioned the president’s decision to continue the Daily News ban.

Terranga Fm, the Standard Newspaper and Daily News were ordered to cease operation in September 2012 by President Jammeh for coverage of the much talked about execution of nine death row inmates in Gambia.

However, his announcement on the lifting of a ban of private media institutions turned out to be simple rhetoric. President Jammeh has clearly shown the world that he cannot tolerate divergent views in the Gambia which he claims is democratic.

Jammeh often warns journalists, accusing some of being “mouthpiece of opposition parties.”