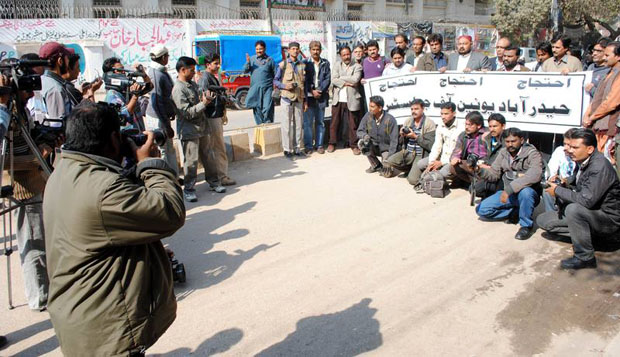 Journalists in Hyderabad staged a protest after the killing of three media workers in Karachi (Image: Rajput Yasir/Demotix)

The Taliban crossed a red-line last week, when they killed three media workers in Karachi. An incensed Pakistani media blamed the prevalent culture of impunity for the violence against the press, and have urged the state to appoint special public prosecutors to investigate murders of journalists. But why should journalists be demanding this privilege?

Umar Cheema, special correspondent with The News, whose writings have landed him in trouble several times already, has a ready answer: “We are in the frontline on behalf of the citizens; we are paying with our lives.”

And Cheema, who in 2011 was awarded the Committee to Protect Journalists’ International Press Freedom Award for his courageous reporting, is not exaggerating. More than 50 journalists have been killed in the line of duty in Pakistan in the last ten years. According to the Pakistan Press Foundation (PPF), 40 were murdered because of their work.

The demand for a special public prosecutor has resonated with many journalists, including Mazhar Abbas, former secretary general of the Pakistan Federal Union of Journalists. “If the government appoints special public prosecutors at the provincial as well as at the federal level, it will help speed up both the trials and convictions,” said Abbas. At present no more than four or five cases out of the scores of journalists killed, have made it to court, he said.

There are several reasons for that, he explained: “Our courts are a big deterrent as it takes forever to seek justice. At times, the family of the deceased journalist is reluctant to pursue the case, sometimes the police discourages the family; and even the media organisation the journalist belongs to is not interested in taking it up.”

Journalists are also looking to media organisations to come up with a set of safety  protocols. “The only weapons we can fight with are pens and mikes provided we know how to use them,” said Abbas.

And, added Cheema, regular demonstrations by journalists do not seem effective anymore. “Our protests should lead to some action, we have to become part of the solution.” To his mind, the journalist organisations should stop dithering and hold a dialogue with media owners to make certain demands on their behalf.

Abbas said reviving the joint action committee, comprising of journalists and media organisations who can “find ways of dealing with violence against media” would be a big first step.

Giving examples, he said: “The last strike against violence was observed by such a committee in 1989, when three journalists in Sindh were killed in one day. The second strong protest from a committee was witnessed in 1995, when the then Pakistan People’s Party government banned six evening newspapers in Karachi. The ban was lifted within a few days!”

But requests for media owners to commit to something where resources may be needed, will probably fall on deaf ears, says Ashraf Khan, a Karachi-based senior journalist: “We all know that while precious equipment at electronic media houses is insured as a top priority, the human machinery is not considered worthy enough to be insured!”

Cheema also cites lack of professionalism as something that may land many journalists into trouble. Hasan Abdullah, a journalist researching Islamist groups and who frequents both Federally Administered Tribal Areas and Afghanistan pointed out there were no “guarantees to life in a war zone”.

To keep from getting caught in the Taliban’s crosshairs, Abdullah said journalists “should be very careful with their language”.

“They should avoid using politically-loaded terms that would give their position away. It is best to stick with language that does not carry positive or negative connotations.”

Further, he said: “Every sane human carries an ideology or a set of ideologies, but when reporting, one must be seen to be impartial. Journalists should ensure that no matter how much they disagree with or loathe a view, they must give everyone the right to express their version. For TV journalists, it may be a good idea if their body language and tone is not too expressive of their internal feelings,” he cautioned.

One response to “Pakistani journalists plea for protection”