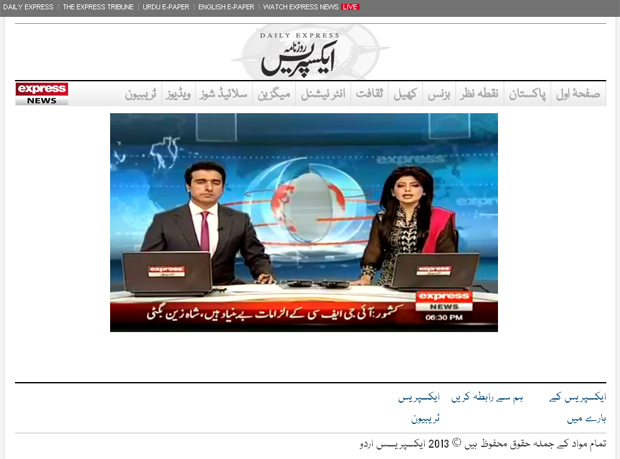 Pakistan’s Express News has been target of attacks by the TTP, including one which claimed the lives of three media workers.

Condemning the cold blooded assassination of three media workers belonging to a private television channel, the Pakistani media has united against the culture of impunity that has gripped the country.

The audacious attack happened on 17 January in Karachi, when a group of men on motorbikes, fired a volley at close range inside Express News’ van stationed in North Nazimabad. The sole survivor was a cameraman. Soon after, the Tehreek-i-Taliban  Pakistan (TTP) contacted the television station and claimed responsibility for the attack.

TTP spokesperson, Ehsanullah Ehsan, said: “To kill certain people is not our aim”. The group said it targeted the media workers because they were  “part of the propaganda against us”.

Analyst and director of media development at Civic Action Resources, Adnan Rehmat, believed the attack was “meant to browbeat and cow down a media that is becoming more outspoken and starting to criticize the Taliban”.

“It’s clearly a message to the whole of Pakistan’s independent media — to intimidate it and make it toe the militants’ line,” agreed Omar R. Quraishi, editor of the editorial pages of the English language Express Tribune, which is Express News’ sister organisation.

“What needs to be understood by all journalists and media groups in Pakistan is that an attack on Express Media Group is an attack on the whole media,” he pointed out.

“Express maybe in the firing line at the moment, but this is nothing short of an attempt to intimidate the media itself, and it will work,” journalist Zarrar Khuhro, of English daily, Dawn newspaper, formerly of ET, also conceded.

“This is because the state itself is so supine in the face of terrorists,” he said and added: “How can we expect one media group, or journalists as a whole, to take a stand when those who are supposed to protect the citizens of this country are bent upon negotiating with killers?” He was referring to the ruling Pakistan Muslim League’s insistence give peace a chance by holding dialogue with the Taliban.

Khuhro was, however, not entirely sure why ET was being singled out by the Taliban. ” Previously there have been rather insane social media campaigns against Express and it has been accused by the lunatic fringe of running anti-Pakistan and anti-Islam campaigns,” he told Index.

Ehsan said the Express TV had been attacked because the Taliban group considered its coverage “biased” and that it would continue to attack journalists they disagreed with. “Channels should give coverage to our ideology; otherwise we will continue attacking the media,” Express TV quoted him as saying.

This was the third such attack on the Express Media Group — which includes the Express Tribune and the Urdu-language daily Roznama Express, in addition to the television channel —  in the last six months. In August and then again in December, unidentified gunmen shot at their newspaper office, in Karachi. Taliban claimed responsibility for the December incident.

But what is frustrating is that not one perpetrator has ever been caught. “This is a spectacular failure of the state and of the media sector’s ability to defend itself,” said Rehmat.

“If those involved in previous attacks had been caught, perhaps they would not have been emboldened to continue this campaign against the media,” said media analyst Owais Aslam Ali, secretary general of the Pakistan Press Foundation.

Rehmat finds a “fairly consistent pattern” in “these string of attacks” with over 100 journalists and media workers killed since 2000.

The Committee to Protect Journalists (CPJ) found soaring impunity rates in Somalia, Pakistan, and Brazil in 2013. The CPJ publishes an annual Impunity Index, which calculates unsolved journalist murders as a percentage of each country’s population.  “Pakistan’s failure to prosecute a single suspect in the 23 journalist murders over the past decade has pushed it up two spots on the index. A new onslaught of violence came in 2012, with five murders,” stated the report.

But these attacks have put the Pakistani media in an ethical conundrum: How much airtime to give to the Taliban to keep them appeased?

“Media is now confronted by a double whammy challenge — wail about terrorism while simultaneously giving air time to those who perpetrate this violence,” said Fahd Hussain, news director at Express News.

“There is no easy answer and no formulaic editorial decision making process. What makes it even harder for the media to take a clear stance is the deep fissure within the media industry itself,” he told Index.

But experts say while training of journalists towards safety can help mitigate the problem to some extent, the government must act proactively as well.

“What is needed is for the government to appoint a special full-time prosecutor dedicated to investigating attacks against the media and for the media houses to adopt and implement best practices in safety protocols,” said Rehmat.

This article was published on 22 January 2014 at indexoncensorship.org