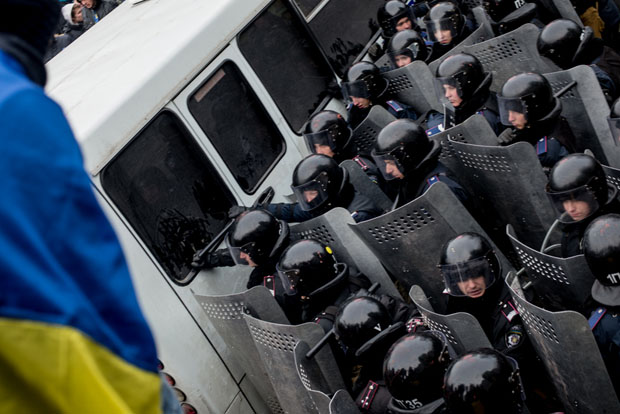 Clashes in Kiev between police and protesters on 19 January (Image: Julia Kochetova/Demotix)

At least 26 journalists were injured during the clashes between police and protesters in Kiev on 19 and 20 January.

According to the Institute for Mass Information (IMI), most of the reporters were wounded by stun grenades or rubber bullets used by the police while dispersing a rally in central Kiev, in protest at the new repressive legislation adopted in Ukraine last week.

IMI’s reports says the riot police on several occasions particularly targeted journalists, despite them having “Press” signs on their equipment and clothes. For instance, police officers shook a bus, while several journalists were filming the events from its roof, leading to several reporters falling off. The police attacked one of them, Denis Savchenko, a cameraman of 5 Channel. They tore his “press” badge of him and detained him briefly. The reporter now at home, with his leg broken.

Anatoly Lazarenko, a reporter of Spilno.tv online television, was shot in the hand while broadcasting live from the scene of the clashes. The reporter says the police aimed specifically at him to prevent him from reporting.

The legislation, adopted in Ukraine on 16 January 2014, has already been dubbed “the Dictatorship Law” by the country’s civil society. According to legal analysis done by experts of the Centre for Civil Liberties and Euromaidan SOS initiative, the law violates legislative procedures, runs counter to international treaties and domestic legislation and seriously restrict rights and freedoms of Ukrainian citizens.

The new law particularly targets free speech. It criminalises defamation, provides for liability for “distribution of extremist materials” and introduces a requirement for the registration of online media. It is now also forbidden to collect and disseminate information concerning law enforcement officers and judges.

The repressive law was officially signed by the President Yanukovich on 17 January, and has already come into force.

The full text of the independent legal analysis of the human rights related bills, adopted in Ukraine, is available here.

One response to “Ukraine: Press targeted and attacked by police”