On Saturday, banned Golden Dawn were left to march in peace, while police clashed with demonstrators at an anti-fascist protest 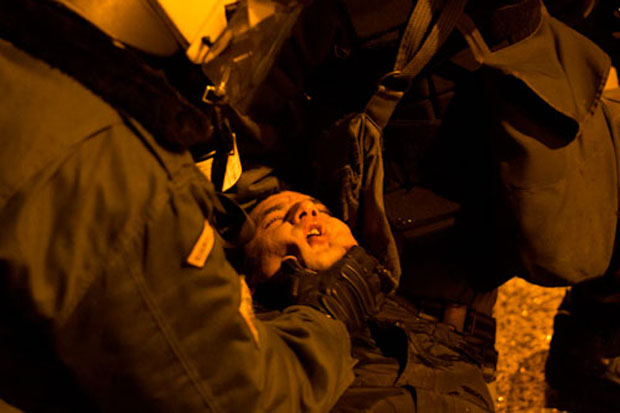 On 25 January, a group of 80-100 neo-fascists took down a banner in Fyssas’ honour and attacked a self-managed hangout called “Resalto”. As documented on social media, the riot police merely looked on during the attack.

On Saturday 1 February, two protests, one from anti-fascists and anarchists, and one from Golden Dawn, were planned at different locations in the centre of Athens.

Anti-fascists were calling for a rally in protest at Golden Dawn’s disrespect to Pavlos Fyssas, as well as the refugee tragedy at Farmakonisi, an alleged pushback operation which had already prompted an investigation and led to condemnation from international human rights organisations.

Golden Dawn had called for its annual march at the Imia memorial. Members and supporters of the party gathered to commemorate the Imia crisis in 1996, a conflict between Greece and Turkey over two small rocky islands during which three Greek navy officers died.

Even though the police had banned all marches — though not rallies — “for reasons of public safety”, Golden Dawn defied the ban and marched through central Athens. There was no intervention from the police.

Elsewhere in the capital, at Syntagma Square, clashes broke out between protesters and the police when two men with Greek flags on their jacket were spotted and chased down. One of them managed to escape through the riot police and the other one was attacked and injured slightly. Despite anti-fascist efforts to safeguard the rally, riot police dispersed the protesters using stun grenades and tear gas. Some protesters were arrested.

Nikolas Georgiou, an independent photojournalist, witnessed an unconscious man being dragged by police.

“They had him in handcuffs and he had already passed out when they started dragging him. It was only when a colleague of mine told them that he was not breathing, that they seemed to worry,” Georgiou told Index on Censorship. 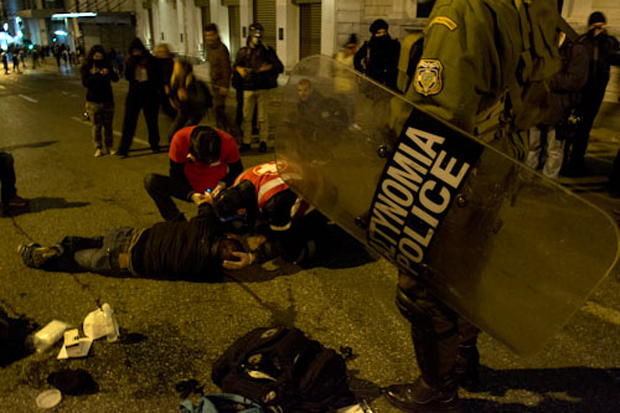 When a member of parliament asked riot police to explain the incident, the answer given was that the protester had “slipped and he fell”.

The man, a Turkish refugee named Saltchuk Gungor, was transferred to the Georgios Genimatas Hospital under close supervision of riot police squads.

People expressing solidarity with Gungor complained about the police presence, while Syriza’s MP Afroditi Stampouli denounced the incident as “unacceptable for democracy”.

Gungor is being charged with the felony of assaulting police officers while having his face covered. He, however, denies the charges: “I didn’t do anything. I was attacked without a reason. They hit me and they dragged me down,” he stated on the website left.gr. Photos taken by witnesses show that Gungor did not have his face covered.

The clashes did not stop at Syntagma Square. Police squads chased anti-fascists at the Monastiraki subway station. They used tear gas amid commuters and chased people through the subway rails.

Golden Dawn also announced its “plan B” at Saturday’s rally — the founding of a party called “National Dawn”. If the government decides to continue the ban of Golden Dawn, the new party will serve as an alternative.

Half of Golden Dawn MP’s are being prosecuted with charges of being part of “a criminal organization”, and one third are now in jail.

This article was posted on 3 February 2014 at indexoncensorship.org