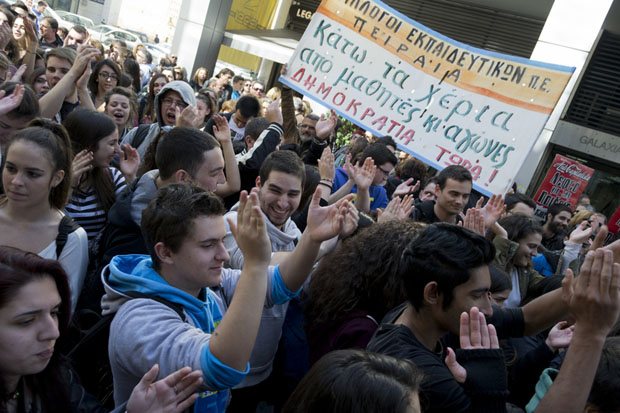 Between 200 – 250 students last week staged a demonstration outside the offices of the Piraeus’ Public Prosecutor against police interference in school protests, following high school students being taken in for police questioning.

Joined by the Secondary Teacher Union of Piraeus and the Parent Association of Keratsini the students shouted slogans like “we won’t be terrorised” and “money for education”. The protest came after students were interrogated by police over an occupation of Keratsini’s 2nd High School in October, in protest at the murder of rapper Pavlos Fyssas by a member of the far right Golden Dawn.

Students were asked about their own and their teachers’ political preferences, especially those who had been striking against public job cuts and forced transfers. There were also media reports that students were questioned about their parents’ voting preferences. A high school student who participated in the protest said they were asked “to give as many names as possible”, adding that they were threatened with having a criminal record if they refused.

Greek police has said it was obliged to conduct an investigation into the matter. It did so on the basis of a legislative act from 2000 punishing by imprisonment attempted occupations or disruption of the “smooth functioning” of a school. The act remained inactive until 2011 when school protests against government plans on privatisation of education, prompted a Supreme Court order for investigations in schools.

Maria Delli, board member of the Parent Federation in Attica District told Index on Censorship: “It is not an unprecedented incident, we have been experiencing police interference and student profiling in recent years. The government is trying to criminalise the common struggles of students and teachers for education. Students complain about the obvious: Not having teachers, not having heating infrastructures and having to pay for their books during the economic crisis.” She added that there was no damage to the school.

Nikos Peritoyannis, president of Parent Association of Keratsini commented to Index on Censorship: “It is a positive outcome. It can be definitely seen as a result of the pressure from the protest actions undertaken by students, teachers and other social groups. However, it does not mean that similar cases will cease to exist. As the struggle against the privatization of education goes on, the government will have to intensify monitoring and suppressing policies.”

On Monday 20 February, Piraeus’ Public Prosecutor finally decided to temporarily withdraw the case as there was no criminal offence for which to prosecute the students. Apart from the incident in Keratsini, Athens’ Attica General Police Directorate (GADA) has also issued a document informing police stations to conduct meetings with school directors in order to disclose “any immediate problems schools are facing”. On 13 February, a similar document reached the director of a kindergarden in New Psychiko, Athens. There was public outcry from teachers’ associations in the media.

This article was posted on 24 February 2014 at indexoncensorship.org