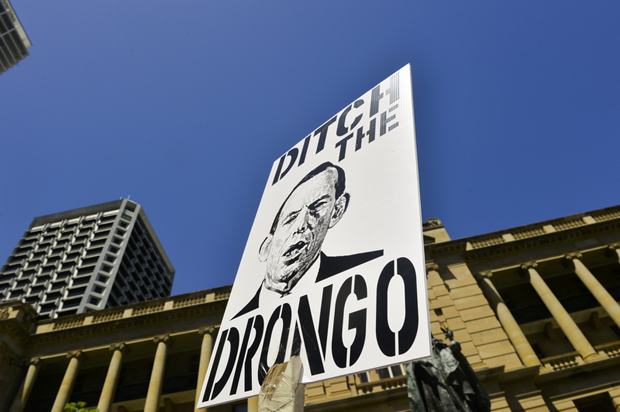 Disillusioned with the Abbott government’s agenda, protestors took to the streets of Brisbane on March 16, 2014. The rally was staged as a vote of no confidence in policy that some say goes against principles of humanity, decency, fairness social justice and equity. (Photo: Claudia Baxter / Demotix)

Australia is looking at repealing sections of the Racial Discrimination Act. Though the move has long been mooted by the government of prime minister Tony Abbott, recent moves to repeal parts of it–and specifically section 18C–has sparked public debate and anger on both sides of the political divide.

“People do have a right to be bigots you know,” attorney general George Brandis told the Australian Senate in late March. He was referring to the Abbott government’s repealing of section 18c of the Racial Discrimination Act which makes it unlawful to “offend, insult, humiliate or intimidate” people based upon their race.

Called by some the “Bolt clause” the repeal of this section has caused both outcry and debate. Conservatives, for the most part, applaud the action for reasons of freedom of speech. Others argue it sets a dangerous precedent and will allow more hate speech to go unchecked or unpunished. It also sends a wider message that racism is acceptable, critics argue.

The Abbott government’s stance can be traced back to 2011. News Limited columnist Andrew Bolt, who is one of the country’s best known conservatives, was found guilty by a federal judge of breaching the Racial Discrimination Act. Writing in Melbourne daily the Herald Sun in 2009 Bolt suggested in two stories that light skinned indigenous people claimed Aboriginality for their own gain. A federal judge found that the articles had not been written in good faith and would offend a reasonable member of the Aboriginal community. Bolt had argued his articles fell within the laws of free speech provisions and, after the ruling was handed down, called it “a terrible day for freedom of speech in this country.”

“In good faith” is important to note as the Racial Discrimination Act’s 18D stipulates that comments made in good faith are permissible as are expressions of genuine belief.  Sections D, B and E will also be repealed, however. In their place it will be unlawful to vilify or intimidate persons based upon their race; however, “to intimidate means to cause fear of physical harm.” The new exemption is rather more broad: “This section does not apply to words, sounds, images or writing spoken, broadcast, published or otherwise communicated in the course of participating in the public discussion of any political, social, cultural, religious, artistic, academic or scientific matter.”

Section 18c does not actually carry a criminal penalty. It became law in 1995, partly through recommendations made by the Royal Commission into Aboriginal Deaths in Custody

In a March 12 editorial the Herald Sun pointed out that the government should not be there to adjudicate in cases where offense has been caused and “is to diminish people’s right to voice their opinions, blunt as they might be.” The paper pointed out that defamation laws–incidentally far more commonly used in Australia than any invocation of 18C–are generally more useful in determining if harm has been caused. Bolt has previously been sued for defamation by a Victorian judge.

Brandis has said he is a proponent of free speech and against the kind of internet filtering suggested previously under Labor whereby sites that were refused classification were simply blocked. Many of the sites–in a list published by Wikileaks–contained material that might have possibly been objectionable but was not illegal. As previously reported by Index, Brandis established a “Freedom Commissioner” in Tim Wilson in late 2013. Wilson has been a strong critic of the Australian Human Rights Commission, suggesting it had narrowed its horizons and focused more upon racial discrimination than freedom of speech. Before being appointed to the commission he attacked it for its silence on the previous Labor government’s new media regulations. Wilson made clear last year at the time of his appointment that would support repealing of 18C.

Though publicly committed to free speech Abbott has previously criticised national broadcaster ABC for its reporting of alleged abuse of refugees by the Australian Navy and its reporting of Australia’s tapping of Indonesian Prime Minister Yudhoyono’s wife’s phone, though under the previous administration, “a lot of people feel at the moment that the ABC instinctively takes everyone’s side but Australia’s.”

Though the coalition has lionised the restorative powers of a free press upon a free society, one of its own MPs, Ken Wyatt, has threatened to cross the floor on this issue, while according to the Sydney Morning Herald, MPs David Coleman and Craig Laundy had also expressed concern. Crossing the floor is, though permissible, a rarity dangerous to one’s political career.

Labor Senator Penny Wong and Leader of the Opposition in the Senate suggested that those arguing against 18C are viewing things in terms of “an abstract philosophical or legal argument… it’s a debate about words and principles…For people who have experienced racism… it’s actually a debate about real people and real hurt.”

This article was posted on 8 April 2014 at indexoncensorship.org