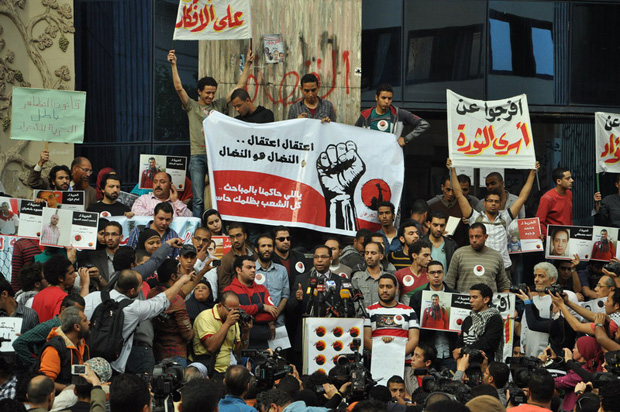 Political activists rallied in front of the Egyptian Journalists Syndicate in Cairo to demand the immediate release of detainees. (Image: Khaled Basyouny/Demotix)

Within the next few days, Egypt is expected to put into effect a new counter-terrorism law that rights groups warn could “severely erode civil liberties” and “reinstate the old police state that existed under deposed president Hosni Mubarak”.

Earlier this month, three bombs exploded outside Cairo University killing a police general. The attacks — the latest in a string of bombings targeting security forces — prompted the government to speed up review of the stricter security bill that the authorities say is necessary “to better protect citizens against the terrorist threat”. The bill contains provisions that would significantly broaden the definition of terrorism and would give police and prosecutors more power to deal with “terror suspects”. If passed, the new legislation would also allow for stricter punishment of perpetrators of “terrorist crimes”.

Skeptics meanwhile, fear that the controversial anti-terrorism law would pave the way for more repression and greater rights violations as the authorities intensify and widen their crackdown on dissent of all stripes. In an interview broadcast on Al Jazeera, Dr. Abdalla El Ashaal, an Islamist thinker and professor of international law at the American University in Cairo stressed the need for a precise definition of terrorism. He cautioned that under the new law, government critics and opponents would likely be classified as terrorists.

The proposed bill defines a terrorist act as “use of force, violence, threats or intimidation to disturb public order or endanger the safety of the society”. It also lists a wide range of activities that would be considered “terrorist crimes” including harming individuals, intimidating them , putting their lives, freedom and security at risk; harming national security, harming the environment, monuments and public property and hindering the work of the authorities, judicial bodies, houses of worship, educational institutions and diplomatic and consular missions. The bill also extends the definition of “a terrorist act” to include behaviour that “damages or harms the communications or information system, financial sector or national economy”.

Under the draft law, “establishing, organising or heading a terrorist group is punishable by death”. Leaving no ground uncovered, the draft law further stipulates a two-year jail sentence or a fine of up to LE 10,000 (Egyptian Pounds) for anyone insulting a public employee verbally or with a sign.

The “loose definition” of terrorism in the bill has drawn denunciation from Egyptian rights organisations. In a joint statement released by 20 rights groups, they warned that “absence of the rule of law and resorting to repressive security measures and exceptional laws will undermine human rights and only lead to increased acts of armed violence and terrorism”. The broad provisions in the bill also pave the way for harassment of “peaceful political opposition members, rights activists, and pro-democracy groups,” the statement added.

The anticipated issuance of the new legislation comes as revolutionary groups in Egypt become increasingly vocal in their opposition to the draconian anti-protest law passed late last year. The pro-democracy groups have in recent days organised a series of events including a weekend marathon of runners and cyclists to bring attention to the plight of “political detainees” jailed for staging “unauthorised protests”. Three liberal activists and leading figures of the January 25 uprising are among the detainees. Last week, a Cairo appeal court upheld the jailing of activists Ahmed Maher, Ahmed Douma and Mohamed Adel for three years for protesting without police permission and assaulting a police officer. In comments to Reuters, Sarah Leah Whitson, executive director for the Middle East and North Africa at Human Rights Watch criticised the verdict against the activists as “another nail in the coffin of the January 25 Revolution”.

Both the anti protest law passed in November and the counter-terrorism bill — which will likely be signed into law before the end of the week — are part of the government’s efforts to stifle political activism and silence dissent. Revolutionary activists and rights campaigners fear the draconian laws will provide legal cover to extrajudicial killings, torture in prisons and unfair trials, allowing the authorities to clamp down even harder on the opposition.

Rights activists are also cautioning that the new law “may intensify violence and terrorism in Egypt” — a country wracked by political turmoil since the unseating of Islamist President Mohamed Morsi by military-backed protests in July 2013. At least 1,400 people have been killed and thousands of Muslim Brotherhood members and supporters have been arrested in a massive security crackdown on dissent in the wake of Morsi’s ouster. Most of the deaths have occurred in violent clashes between pro-Morsi protesters and security forces in which the latter have been accused by rights organisations of using disproportionate lethal force. The Muslim Brotherhood, the Islamist group which rose to power in Egypt’s first free and fair parliamentary elections, post revolution — and from which Morsi hails — was designated as a terrorist organisation in December.

Since the ousting of  Morsi in July, there has been a surge in militant attacks targeting mainly military and police forces but also, the country’s minority Christian population and tourists. Initially concentrated in the Sinai Peninsula, the terror attacks — mostly claimed by the Sinai-based jihadi group Ansar Beit Al Maqdis — have in recent months spread to other parts of the country. Over the last few weeks, Egypt has also been rocked by a wave of student protests at state-universities across the country. Clashes between student protesters and security forces using tear gas and bird shot have resulted in the deaths of several young protesters and the arrests and detention of scores of others. The students are protesting a recent court ruling allowing police to return to university campuses and are demanding the release of student-detainees .The protesters are also opposed to former Defence Minister Abdel Fattah El Sisi’s presidential bid. Field Marshal El Sisi retired from the army earlier this month and announced his candidacy in the presidential elections, scheduled to take place on 26 and 27 May. In a televised address to the nation announcing Morsi’s removal from power last summer, the former army chief had promised an inclusive government, pledging a limited role for the army in politics .

“The proposed counter terrorism bill signals a reversal of the hard-earned freedoms gained after the January 2011 uprising and will take the country back to its pre-January 25 revolutionary state,” laments Gamal Eid, the Executive Director of the Arab Network for Human Rights.