NEWS
“If you read, write, publish, think, listen, dance, sing or invent, the TPP has you in its crosshairs”
30 Apr 2014
BY ALASTAIR SLOAN 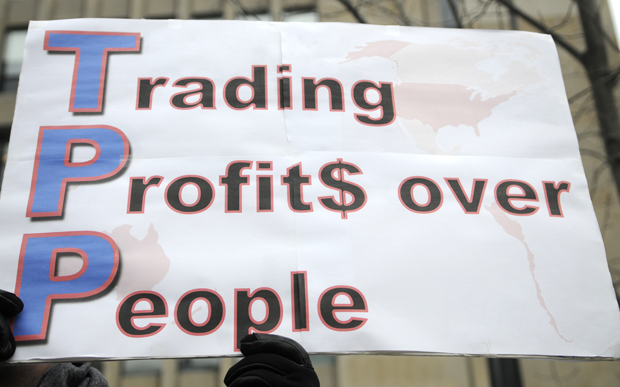 A sign saying “trading profits over people” during a rally to protest the proposed TPP trade agreement and NAFTA Agreement on January 31, 2014 in Toronto, Canada. (Photo: Shutterstock)

Freedom of expression campaigners have warned that the Transpacific Partnership trade agreement, which Obama has been negotiating with a dozen Asian governments, will have wide-reaching censorship implications.

With secret negotiations reportedly at a critical stage, campaigners have mounted a global plan to draw the attention to the role that internet providers would play in preventing the free flow of information.

While this might be good news for music, film and TV companies – who have seen profits fall off the back of websites such as the Pirate Bay, but a spokesperson for Electronic Frontier Foundation warned the result could be a “cautious and conservative” internet afraid to run into draconian enforcement policies laid out under the new TPP rules.

“For example, on an ad-supported site, the costs of reviewing each post will generally exceed the pennies of revenue one might get from ads. Even obvious fair uses could become too risky to host.”

EFF also warned that ISPs take-down “ask questions later” approach to copyright infringements could give corporations too much power to remove time-sensitive user-generated content, for example a supporting video for an election campaign.

“Expression is often time-sensitive: reacting to recent news or promoting a candidate for election. Online takedown requirements open the door to abuse, allowing the claim of copyright to trump the judicial system, and get immediate removal, before the merits are assessed.”

TPP, which is currently being negotiated between the United States and a dozen major markets in Asia, It is a key plank in Obama’s much feted “pivot to Asia” and could affect up to 60% of American exports and 40% of world trade.

The US-led treaty has proposed criminal sanctions on copyright infringement and – according to EFF – could force internet service providers to monitor and censor content more aggressively, and even block entire websites wholesale if requested by rights holders.

Backed by a number of groups including Avaaz, Reddit, Electronic Frontier Foundation and Open Media International, the anti-TPP coalition is also employing guerrila marketing techniques. These include projecting campaign slogans onto key government buildings in Washington, in an attempt to draw wider attention to the secretive talks, as well as a digital banner that can be easily installed on any website.

The trade negotiations have controversially gone on largely behind closed doors – and while talks are believed to have stalled between Japan and the United States in the latest round – many countries, including Vietnam and Australia, are vociferous advocates.

WikiLeaks’ Julian Assange, who master-minded the release of a rare leaked chapter of the agreement in November, is adamant the deal’s worst aspects lie in its approach to intellectual property.

Speaking when the documents were first published on the Wikileaks website, he observed: “If instituted, the TPP’s IP regime would trample over individual rights and free expression, as well as ride roughshod over the intellectual and creative commons”

He added “If you read, write, publish, think, listen, dance, sing or invent, the TPP has you in its crosshairs.”

OpenMedia’s Executive Director Steve Anderson, told Index “If the TPP’s censorship plan goes through, it will force ISPs to act as “Internet Police” monitoring our internet use, censoring content, and removing whole websites.”

OpenMedia, although based in Canada, has led the charge in co-ordinating the campaign to shed light on censorship aspects of the deal.

“A deal this extreme would never pass with the whole world watching – that’s why U.S. lobbyists and bureaucrats are using these closed-door meetings to try to ram it through. Our projection will shine a light on this secretive and extreme agreement, sending decision-makers a clear message that we expect to take part in decisions that affect our daily lives.”

This article was originally published on April 30, 2014 at indexoncensorship.org