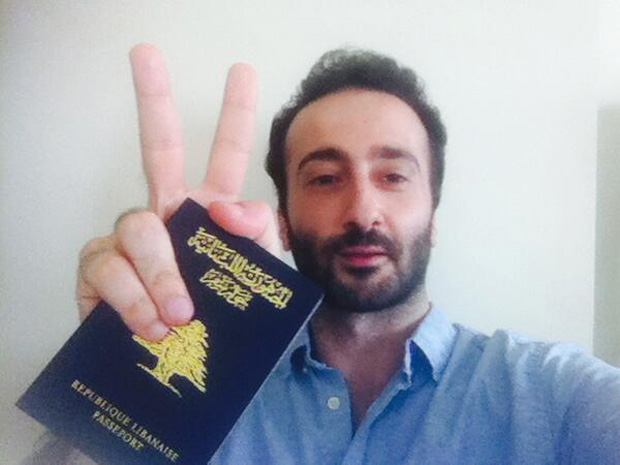 Lucien Bourjeily is smiling, and with good reason. Only two days earlier, the dark blue Lebanese passport he is holding up had been confiscated by the country’s intelligence agency, with no clear information of when he might get it back. The explanation given? “You know what you did.”

Speaking to Index on Censorship from Beirut, it’s clear that Bourjeily does know. This was not his first run-in with Lebanon’s General Security Directorate. The well-known writer saw his recent play about censorship in Lebanon banned by the agency, which counts media censorship among its many roles. His play was “unrealistic”, the censors told Bourjeily, the irony of the situation lost on them.

The experience earned him a nomination for this year’s Index awards. While he couldn’t attend the awards ceremony in London, he will be travelling to the UK in June to take part in the LIFT Festival with his latest production Vanishing State, which deals with redrawing borders in the Middle East. It was his attempt to renew his passport for this trip — another area under the jurisdiction of the directorate — that led to his latest ordeal.

Bourjeily is convinced the confiscation had been agreed on beforehand. Everyone he dealt with from the general security that day were saying the same thing, despite being in different rooms. “That’s how you know the decision had already been taken.”

A public figure in Lebanon, Bourjeily’s case drew huge media attention. People across the country rallied behind him, and lawyers offered to represent him for free. “I feel very lucky to have so much support, and that my case got so much favour in the public opinion,” he says.

He believes his latest case especially strikes a chord with his countrymen and women. “Every Lebanese loves their passport,” he says. “Freedom of movement for them is even more important than any other thing. Freedom of speech and now freedom of movement? This is too much!”

But he is not the only person to experience this. In 2010, general security confiscated the British passport of Nizar Saghieh, a dual British and Lebanese citizen. Prior to this, Saghieh had represented four Iraqis who were suing the Lebanese state over illegal detention by general security. He only got the passport back following direct intervention by then-Interior Minister Ziyad Baroud. Similarly, current Interior Minister Nouhad Machnouk stepped in on Bourjeily’s behalf, personally calling the director of the general security to demand the return of the passport.

He finally got it back on 23 May, with the message that the whole thing had been “a mistake”, and there would be an internal investigation. Bourjeily is not allowed to see the results of the investigation. He asked for justification on behalf of the Lebanese people, wondering whether the agency weren’t at least going to tell the public what they’d told him — that it had been a mistake. Again, he was told no.

Bourjeily says he will add this experience to the sequel of  his banned play. He has also met with Saghieh, who heard about his case in the media, and they “discussed ways to collaborate together”. He has no doubt that this, all things considered, happy ending was down to public pressure. Others might not be as lucky.

“[What] if it [was] not me? If it’s not a person who has 30,000 followers on Facebook? If it was just any regular Joe in Lebanon? What would happen to them if they confiscated their passport?”

This article was posted on May 29 2014 at indexoncensorship.org