NEWS
Meltem Arikan: Creating life with the tools of death
12 May 2014
BY MELTEM ARIKAN 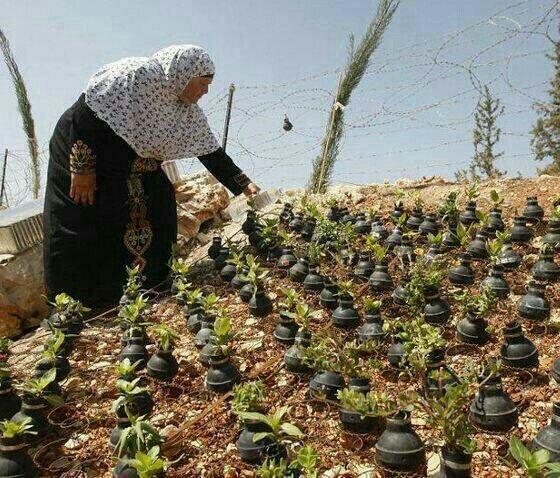 Three days ago a picture appeared on my Twitter timeline. A Palestinian woman was watering flowers inside dozens of hand grenades lined up in her little garden, surrounded by barbed-wire fences.

I froze. For minutes the picture and I looked at each other. No picture had affected me this way for a long time.

Creating life with the tools of death, in the middle of a war, in a place where every day children, women and men of all ages are being killed mercilessly, where the sound of the bombs has drowned out the songs of the birds, where pain is as intense as the oxygen in the air.

While discussions go on about where freedom of speech and expression start and end, or where you draw the line… a single picture transfixes me.

I’ve always asserted in my articles that we are in a transition from the analogue to digital world and during this transition of transformation, women will have an important role and we will not be free unless we transcend the thought patterns forcibly imposed upon us. And now, this picture in front of me, as if it was silently saying everything my words fail to express.

Silently responding by creating life from death to the sound of bombs, cries of pain, screams of fossilized politics.

While thoughts and feelings are manipulated everyday with the words, concepts, ideals and hatred forcibly imposed on us, where do freedom of speech and freedom of expression start and where do they end?

I believe, in the analogue world in accordance with the traditions of patriarchy, either you become a supporter or opponent of the dominant ideology of the society we live in. And yet, in the end, isn’t it obvious that both supporters and opponents are trapped in the same loop and are forced to accept that power is only gained through violence?

To become “Man”, men are obliged not only to find their power but prove it too while women are obliged to watch them fighting it out, forced to obey their rules stuck in their endless power games. As a result, women can never protect themselves or their children. Violence continues to give birth to violence… the life given by women is brutally destroyed.

No matter how much societies have developed economically, in general, women believe that the more they can be in compliance with the patriarchal system the more they can succeed. However, they cannot stop the violence, war and hatred.

On the other hand, in this picture, one Palestinian woman expresses herself clearly even though nobody hears her thoughts, even though she is not screaming or fighting… freedom of speech grows amongst the hand grenades.

During the transition period to the digital world, those who express themselves free from the coding of the dominant system and those who defend the freedom of speech, come together through social media… in the flower garden of the Palestinian woman.

One response to “Meltem Arikan: Creating life with the tools of death”