"Why is it that all the good people die in this country?" 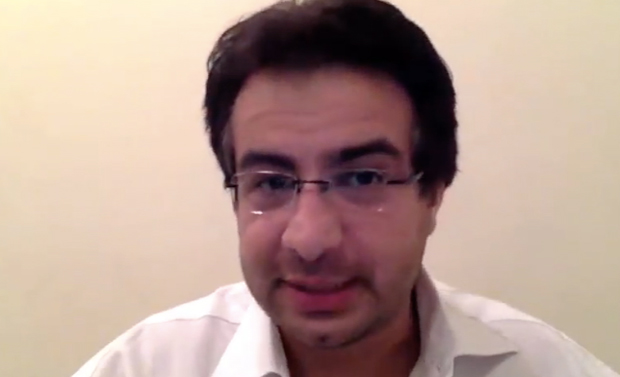 The shocking news of the death of democracy advocate and widely acclaimed Egyptian blogger, Bassem Sabry on April 29, hit me like a lightning bolt.

My short friendship with Bassem dates back to the early days of the January 25 uprising a little over three years ago when, without knowing me personally, Bassem had telephoned to congratulate me on quitting my job at Egypt’s state-run Nile TV in protest at the station’s biased coverage of the protests in Tahrir Square. Although we only met a couple of times after that conversation, I have since considered Bassem “a friend” mainly because of our shared aspirations for a better Egypt.

I learned of Bassem’s death from the flood of Twitter tributes to him from his friends, associates and fellow revolutionaries posted a couple of hours after he had passed away in what his family members describe as a “tragic accident.” Like many of his friends, I had hoped the Twitter eulogies were a sick joke. Unfortunately, they weren’t.

Bassem’s death was confirmed shortly afterward by news reports that said he had fallen to his death from a 10th floor balcony of his apartment after he reportedly “went into a diabetic coma”.

In an outpouring of love and grief, many of Bassem’s comrades in the struggle for a free and democratic Egypt — and some admirers who had never met him but who knew Bassem from his honest and insightful writings and commentaries on Egyptian politics, post-revolution — wrote moving eulogies to him on Twitter .

“Only the good die young but a great loss for those who still have hope for a better Egypt,” prominent human rights lawyer Ragia Omran said via her Twitter account.

“I never knew him but I knew his work. I saw the impact he had and his determination to make things better,” wrote Jeremy Walker, a journalist who has worked for the BBC World Service.

In other online tributes to Bassem, he was fittingly described as “an inspiration”, “a voice of reason”, “a true patriot” and “a champion of civil rights.”  Highly respected for his reasoned analysis of regional politics for several international and local media outlets (including Al Monitor, Foreign Policy, the Huffington Post and the independent Egyptian daily Al Masry El Youm), Bassem’s ability to rise above the deeply divided political fray has earned him respect from across the political spectrum.

“I call on the youth of the revolution to pray for a companion and a noble person whom we lost,” exiled Nobel Peace Prize winner Mohamed ElBaradei said on Wednesday via his Twitter account. Bassem had briefly worked as a strategist for Al Dostour Party — the political party founded by ElBaradei after the January 2011 uprising. That however, did not stop him from criticizing the liberal politician’s “one foot inside, one foot outside” attitude vis-à-vis Egyptian politics, which Bassem deemed “frustrating to his supporters”.

Nader Bakkar, the spokesperson for the ultra-conservative Salafi Al Nour Party also expressed his condolences following Bassem’s death, describing him as “a moral person who loved his country”.

Bassem has also been hailed by analysts as a “voice of moderation and conciliation” — a title he deservingly earned for his repeated pleas for unity in the bitterly divided country. In an article published by Ahram Online on June 18, 2013 — just two weeks before Islamist President Mohamed Morsi was toppled by military-backed protests — Bassem had expressed his anxiety and frustration at the discord and deepening polarisation in Egypt. He wrote:

“It is utterly frustrating, disheartening and troubling to see where we are after more than two years of a revolution that was meant to end injustice, political exclusion and repression and hopefully unify most of the country around the dream of rebuilding a strong and vibrant nation. Instead, much of that injustice, exclusion and repression still exists. What’s worse, we’re more divided than ever as a people, and more exclusionary, while the voices of reconciliation and bridge-building are finding themselves more and more unpopular.”

In the same article, Bassem also expressed fear that the deep divisions in Egypt would lead to more blood-letting and violence in the months ahead.

“The fact that we are likely to see some violence and casualties on all sides fills me with dread,” he wrote, noting that clashes between Morsi supporters and opponents had already erupted in Fayoum and Menoufiya. Bassem’s fears were not unfounded: the country has since slipped into a spiral of violence and counter-violence with security forces using lethal force to disperse “anti-coup” protests and militants retaliating with attacks on military and security installations.

Meanwhile, an Arabic essay written by Bassem in October 2012 — around his 30th birthday — and which was published in the independent Al Masry El Youm, reflects his admirable traits of tolerance and compassion while demonstrating his strong urge to embrace all of humanity. In the essay titled Eleutheria, Bassem shared with readers the lessons that life had taught him. Many of those who have read the piece were amazed by the foresight and wisdom of someone so young. The essay was later translated into English and posted on his blog site, becoming one of the most read articles in 2012.

“I have met Hindus, Buddhists, Christians, the non-religious, the still-searching, and others. And I have met those of all skin colours. And I have found them to all be like myself. We became friends, and I became wealthier in spirit as a human being. And I learned that mankind was one, that coexistence was possible, that we must ostracise the hate-mongers amongst us. We can achieve with the pen and the word much more than what we can achieve with guns and loud angry rhetoric – and achieve that more rapidly ”

Unlike many Egyptian journalists who practice self-censorship in the current repressive climate of fear since the coup, Bassem had refused to be intimidated and had managed to remain neutral and objective throughout. He refused to take sides in the ongoing conflict between the military and the Muslim Brotherhood, designated as a terrorist organization in December. A few weeks ago when asked by a fellow journalist whose side he was on, he replied: “Nobody’s, I simply support my country.”

Close friends and secular activists describe him as “an optimist to a fault”. In recent months however, Bassem’s optimism had waned and he became increasingly frustrated with the political turmoil, violence and above all, with the military-backed government’s repressive policies. In a tribute to Bassem published in the independent news portal Mada Masr on Thursday, his friend H. A. Hellyer, a non-resident Associate Fellow at the Royal United Services Institute for Defence and Security Studies in London and the Brookings Institution wrote: “Bassem at heart was a great optimist. However, and he was very reserved about this fact, he was deeply and terribly pained by the experience of particularly the last year. The pain he felt, as he saw Egyptian turn on Egyptian, troubled him tremendously. He lived to see the revolution that so many Egyptians of his generation wanted to be a part of — but he was also profoundly wounded to see the failure of Egyptians to live up to that revolution.”

Bassem himself had expressed his dismay at the turn of events in Egypt, post-revolution, blaming the messy transition on the lack of vision of the country’s political elite. In an article published by Ahram Online in June 2013,  he lamented that “the political elites, on every side of the spectrum, have profoundly failed the nation in varying ways down the road through an astonishing alternation (or even, at times, a blend) of lack of vision, displays of ineptitude, an improper balance of idealism and pragmatism, inability to know when to lead the street and their political biases and when to defy them for a greater good if necessary, and more.”

I last met Bassem for dinner at a restaurant overlooking the Nile River in the affluent neighbourhood of Zamalek one week before his death. That evening, he did not drink and left his food untouched. I also noticed that he had lost his infectious vigour and enthusiasm; it was clear he had been weighed down by the news of daily killings and detentions of both secular activists and Muslim Brotherhood supporters, the targeting of journalists by security forces and the recent mass death sentences handed down to Morsi loyalists. We talked about the ongoing events and about the presidential elections scheduled for the end of this month. Bassem told me that he had joined leftist politician Hamdeen Sabahy’s presidential campaign. I was not surprised. After all, most young revolutionaries do not want to see Egypt return to oppressive military rule and Sabahy is the sole candidate contesting the presidential elections against Field Marshal Abdel Fattah El Sisi. Despite joining protests demanding the downfall of the Muslim Brotherhood regime in July 2013, many of them are waking up to the realization that their uprising has paved the way for the return of the old police state that existed under Hosni Mubarak. The jailing of prominent secular activists, the return of media censorship and the recent outlawing of the April 6 group — the movement that helped ignite  the January 2011 mass protests — are all signs that the revolution has once again been stolen and that this is the counter-revolution, lament the young activists.

In a message posted on his Twitter account on March 24, 2013 Bassem had quizzed: “Why is it that all the good people die in this country?” He had posed the question in the wake of violent demonstrations against the Muslim Brotherhood and clashes between secular activists and Brotherhood supporters outside the Islamist group’s Cairo Headquarters. Earlier that same day, Morsi had warned he would take “necessary measures” against any politicians and Mubarak loyalists shown to be involved in the violence and rioting.

At the time, Bassem was probably unaware that his question was a premonition of his own death. It is a question that many of his young activist friends are echoing today.

“Why is it that all the good people die in this country?” Rest in Peace, Bassem. You will be sorely missed.

This article was posted on May 6, 2014 at indexoncensorship.org