NEWS
Revealed: The British exports that crush free expression
09 May 2014
BY ALEX STEVENSON 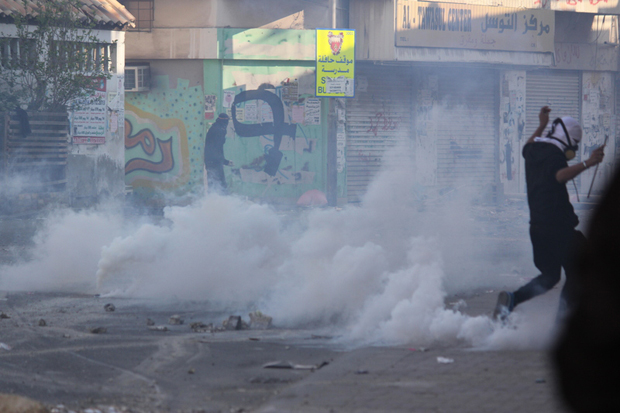 Made in Britain? Physicians for Human Rights (PHR) called for the immediate suspension of the use of excessive, indiscriminate and systematic use of tear gas against civilian protesters and densely populated Shia neighbourhoods in Bahrain (Image: Iman Redha/Demotix)

The Arab Spring has not stopped Britain from helping crush free expression and freedom of assembly by selling crowd control gear to authoritarian states including Saudi Arabia and Bahrain.

Analysis of newly-published data on export licences approved by the UK government have revealed ministers backed over £4 million of tear gas, crowd control ammunition and CS hand grenade sales over the last two years to Saudi Arabia – one of the most repressive states in the world.

The British government also allowed crowd control ammunition to be sold to Malaysia and Oman, as well as tear gas to Hong Kong and Thailand.

It gave the green light to anti-riot and ballistic shields to four authoritarian regimes listed by the Economist Democratic Index:  the United Arab Emirates, Bahrain and Azerbaijan, as well as Saudi Arabia.

Its only refusal for an export licence in 2013 for equipment which could be used to suppress internal dissent was for an order of CS hand grenades and ‘tear gas/irritant ammunition’ to Turkey.

A lack of transparency across the secretive arms sector makes it difficult to establish which companies are providing the arms – or how the country in question intends to use them.

But the Geneva Convention forbids the military use of all gas weapons, meaning the UK government would have assumed the tear gas was for use against civilian protesters.

Brief explanatory notes included in the export licences data suggest all those mentioned above are primarily for use against domestic populations.

The notes typically state the licence is granted “for armed forces end use” or “for testing and evaluation by a government / military end user”.

The only exception is the note for a sizeable order of anti-protest equipment for Brazil, which makes clear the export licence is granted for “armed forces end users not involved in crowd control / public security”.

Further evidence has emerged that Britain’s leading arms firm, BAE, has signed a £360 million contract with an unnamed Middle Eastern country for the upgrade of armoured personnel carriers whose primary use is against protesters.

Industry insiders believe the improvements are being made in Saudi Arabia to a stockpile of the vehicles left in the country by the United States military.

He faced heckling and hissing from vocal critics in the audience who had infiltrated the two-hour question-and-answer session, but insisted BAE was “helping to preserve world peace” and that the company “are not undermining the broader international rules” of the arms trade.

Speaking afterwards, however, a member of BAE’s board suggested the “natural place for these decisions is with government” rather than the company.

“I’m not abrogating our moral responsibility,” he said, “but it’s right that the burden of these difficult decisions is on the government because, in the UK at least, this is an elected democracy.”

Britain’s parliament, at least, has proved reluctant to provide a critical voice on the UK’s arms trade.

Opponents had alleged Saudi Arabian troops which intervened to crush the Arab Spring in Bahrain had received British military training. A recent report from MPs accepted the Foreign Office’s rejection of British complicity, with ministers arguing none of the training had taken place “in a repressive way”.

The Commons’ foreign affairs committee did, however, call on the government to “adhere strictly to its existing policy to ensure that defence equipment sold by UK firms are not used for human rights abuses or internal repression”.

Its request for the government to provide further evidence that it is doing so in practice did not meet with a positive response.

Officials said the risk that export licence criteria might be broken is “factored into” the original decision to grant the licence.

The Foreign Office stated: “There are rigorous pre-licence checks and, for open licences, compliance audits at the exporters’ premises in the UK. We will continue to scrutinise carefully all arms sales to Saudi Arabia.”

Many believe the current export licence regime is not fit for purpose, however. In 2013 the UK approved military licences to a total of 31 authoritarian regimes including Russia, China, Qatar and Kuwait.

“BAE couldn’t sell the weapons they do to these countries without the support of the UK government,” Andrew Smith of the Campaign Against The Arms Trade said.

“The UK government can stop any of these exports at any time but is choosing not to because it’s putting arms company profits ahead of human rights.”

He suggested the government’s decision to exclude Bahrain from its list of ‘countries of concern’ on human rights was “politically motivated”.

And he warned arms sales went beyond small-scale arms and ammunition to include much bigger purchases like fighter jets.

“The reason the Saudis buy from Britain is not just because Britain is willing to sell arms,” Smith added, “but also because it comes with political support and the endorsement and silence of the British government.”

This article was posted on May 9, 2014 at indexoncensorship.org