NEWS
Ukraine: Poroshenko win a sign of national unity but not a final remedy 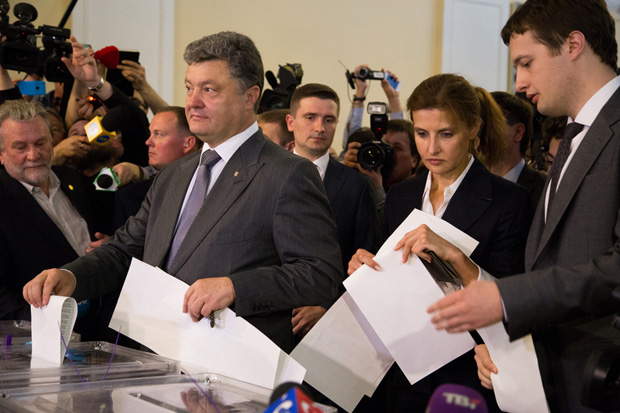 Petro Poroshenko has won the Ukrainian presidential election in the first round, as preliminary results and exit polls show he received over 50% of votes. A billionaire, sometimes dubbed “the Chocolate Oligarch” (his main asset is Roshen, the largest confectionery manufacturer in Ukraine) gained his popularity during the Euromaidan protests in November 2013 – February 2014. Many in Ukraine consider Poroshenko to be a controversial figure as the head of the country; he represents a revolutionary, pro-European, but still old, oligarch-driven elite, and a system the Euromaidan protests were aimed against. Yet, the huge support he received shows Ukrainians are tired of the period of uncertainty, and united to give their country a new legitimate leader who can deal with unrest in the south-east regions, where pro-Russian militants continue their attempts to destabilise the situation.

Poroshenko’s first-round victory is a sign of national agreement, but is hardly a final remedy for all the problems Ukraine faces, both externally — like the military threat from Russia, including the occupation of Crimea — and internally. The latter applies not only to economic difficulties, but also to the necessity of extensive reforms that deal with the whole system of interrelations between the state and the society, ensuring real rule of law and putting end to corruption and human rights abuses.

Events in Ukraine over the last six months have made the country one of the most dangerous places for journalists in the world. According to the Institute of Mass Information, there have been 218 cases of physical attacks against reporters in Ukraine in 2014. Viacheslav Veremiy, a reporter for Ukrainian Vesti newspaper, was shot during events on Maidan on 19 February. Vasily Sergiyenko, a journalist and a civic activist, was tortured and then killed in Cherkassy in April. The death toll continued to rise even on the eve of the election, as Andrea Rocchelli, an Italian photo reporter, and his interpreter Andrei Mironov, a Russian human rights activist and a Soviet-era political prisoner, were killed on 24 May near Slovyansk, in the Donetsk region.

“It is still difficult to say if the free speech situation will improve after the election, especially in the east of Ukraine. It will depend on effectiveness of work of the new president and development of relations with Russia,” Tetiana Pechonchyk, the head of the Human Rights Information Centre, told Index on Censorship.

But it is not only the areas of military conflict that are dangerous for journalists. Sergiyenko’s murder and the case of Evgen Polozhiy, the editor of Panirama newspaper from Sumy, who was severely beaten, show reporters’ work is becoming increasingly risky business in Ukraine.

“There were quite a number of journalistic investigations before the Euromaidan, but they led to no official reaction or criminal cases about corruption revealed. Now that the society has changed, corrupt officials and criminals are especially afraid of critical reporting as they can lose their positions or even go to prison; they choose different methods to silence investigative journalists,” Pechonchyk says.

Another important aspect of a media reality around events in Ukraine is the massive information war, launched by Russia. The aim is to show a distorted picture of a modern Ukraine as a state where right-wing extremists and “fascists” seized power, in spite of the fact that the leader of the notorious “Right Sector” organisation got less than 1% of votes during the presidential election. They also aim at perplexing the foreign audience by mixing the terms “Russian-speaking” and “Russian”, for instance to justify invasion of Crimea or actions of pro-Russian militants in Donetsk region.

“That’s what you expect Russia to do — blow the country over with lots of stereotypes, lies and myths. Unfortunately, the Ukrainian government lost this information war. But what is great is that civil society, bloggers, ordinary young people on Facebook confronted Putin’s lies with their activity and creativity, with websites that disprove Russian TV channels’ propaganda or fake news,” says Michael Andersen, a journalist who made a documentary for Al Jazeera about typical stereotypes around Ukraine and Ukrainians.

The latter still have a long way to go to ensure the Maidan changes a lot more than just the name of the president and the faces of the governmental officials. Civil society and the media have a vital role to play on this path to future reforms.

This article was published on May 27, 2014 at indexoncensorship.org