NEWS
Did culture and arts prepare Egypt for revolution? 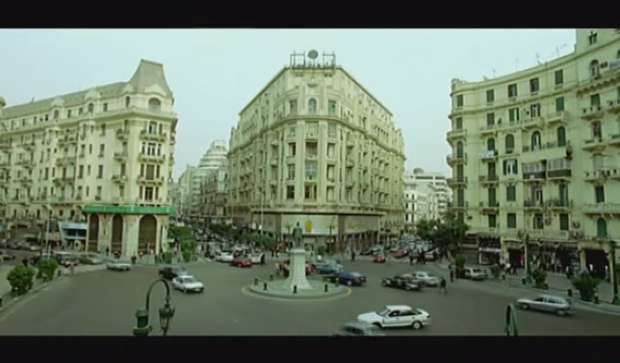 When mass protests broke out in Egypt on January 25 2011, the uprising took many people around the world, including Egyptians, by surprise. But some believe the stage was in fact already being set for revolution years earlier — and that popular culture played a part.

On 17 December 2010, Mohamed Bou Azizi, a Tunisian street vendor had set himself on fire in protest of the confiscation of his wares and the humiliation inflicted on him by a municipal official. His act sparked mass street protests in Tunisia which 28 days later, led to the overthrow of the authoritarian regime of Zine El Abidine Ben Ali.

When Ben Ali fell, analysts questioned whether the uprising in Tunisia would inspire similar revolts in other North African countries with despotic regimes, including Egypt which they pointed out, also suffered enormous socio-economic inequalities, widespread youth unemployment and political marginalisation of the masses.

The thought of a mass uprising in Egypt was however, quickly dismissed by Egyptian officials as “outrageous”.

“Egypt is not Tunisia”, scoffed veteran diplomat Amr Moussa when I asked him if Egypt would be next. I met Moussa on January 19, 2011 at a Sharm El Sheikh conference on Arab Economic Integration — a gathering that was overshadowed by the dramatic events unfolding in Tunisia. The veteran diplomat who had served as foreign minister under Hosni Mubarak, confidently told me that Egypt was “a much bigger country and vastly different in terms of demography”. Moussa’s argument convinced me. Indeed, Tunisia is a homogeneous society with a relatively well-educated population unlike Egypt — a more diverse society with in excess of 16 million illiterate people, according to a 2012 study released by the Central Agency for Public Mobilisation and Statistics.

Besides, there was widespread political apathy in Egypt. For decades, the Egyptian people had silently tolerated rights abuses at the hands of the corrupt regime. So patient were the Egyptians with their repressive government that analyst Khaled Diab joked about their political apathy in an op-ed published in the Guardian in June 2009, saying that: “The people of Egypt possessed some sort of a cultural gene against rebellion and risk taking.”

It was not surprising that the Egyptians had shown remarkable immunity to the Tehran protest virus, he wrote, explaining that “the Egyptian people had for decades, been ruled by a long succession of foreigners who cared little for their well being. They considered their native rulers just as alien.”

The widely-anticipated political pandemic had hitherto, failed to materialise… Until Tunisians revolted.

But contrary to popular belief, the eighteen-day uprising that overthrew Mubarak was not an “overnight eruption”. In fact, it had taken several years of ground-laying and a series of events helped pave the way for the revolt that was to come.

Some analysts believe the stage was being set for the 2011 mass protests from as early as 2004, not long after the fall of Iraqi strongman Saddam Hussein.

This was the year Egyptian intellectuals, artists and activists founded the Kefayya (Enough) Movement that would oppose the Mubarak regime and call for fundamental constitutional and economic reforms. Although the overarching ideology of the movement is largely secular, many members of the then-outlawed but tolerated Muslim Brotherhood joined forces with the leftists and secularists.

Moreover, there were the workers’ unions, which in the years leading up to the uprising had organised a series of labour strikes, protesting low wages and rising food costs. The 2008 labour protests which began as an initiative of workers in the textile industry in Mehalla El Kobra and other Egyptian cities, inspired mass momentum and were the first spark that ignited the street protests that followed two years later.

Egypt’s pro-democracy youth activists were also active and widely credited for using social media networks to fuel the anger against the brutal regime. The April 6 Youth Movement and “We are All Khaled Said” Facebook group mobilised Egyptians for the protests by posting videos of police brutality and calling for civil disobedience.

Again, contrary to popular belief, the January 2011 uprising was not merely a “people’s movement”, as it has often been described. Some analysts think the uprising may have been driven by the security state much like the revolt that ousted Mohamed Morsi, Egypt’s first freely elected president, two years later. Breakaway members of Tamarod, the movement that last summer gathered signatures for a petition calling on the Islamist president to step down, later revealed that “state security agents had guided and influenced our campaign”.

Some members of the group went as far as admitting that “some of the movement’s founders had been planted by state security” according to a Reuters article published online on February 20, 2014. Similarly, the January 25 uprising may have also been guided, albeit more subtly by the deep state — a term used to refer to the country’s combined security apparatus: the intelligence services, the police and National Security. It was no secret that Mubarak had been grooming his son Gamal to succeed him — a move that was rejected by senior-ranking generals in the army. The generals had expected the succession bid to cause popular unrest and decided to be prepared to step in.

“General Abdel Fattah El Sisi, who was head of military intelligence in 2010, had already been picked by his bosses as the country’s next defence minister and was asked to prepare a study of Egypt’s political future. He proposed that the army should be prepared to move in to ensure stability and preserve its central role in the state in the likely event of civic unrest breaking out,” journalist Richard Spencer wrote in an opinion piece published in the Telegraph in June 2014. Political analyst Hassan Nafaa was quoted as telling Spencer that: “When the revolution of 2011 exploded, the army had already made plans to deploy.”

“They chose to sacrifice Mubarak rather than the regime itself,” Nafaa added.

Egypt’s powerful military firmly believes it is entitled to remain in power, having fought two wars with Israel. Besides, at stake — should the country be ruled by a civilian president — is the military’s vast business empire estimated to be as much as 40 percent of the country’s GDP.

So how did the deep state in Egypt prepare unsuspecting Egyptians for the uprising that was to come?

Culture and the arts served as the catalysts for the movement for change that was being shaped as early as four or five years before the actual “revolution” erupted. From 2006 onwards many artistic works, including locally-produced films screened in Egyptian theatres, helped fuel the people’s anger and frustration, inciting protests against the inept government. While some may dismiss this theory as absurd, in reality, there is strong evidence to support it.

Take the big-budget film “Yacoubian Building”, based on the novel of the same name by author Alaa Aswany, a member of the opposition Kefayya Movement. The three hour epic, screened in Egypt in 2006, shed the spotlight on a host of societal ills including the rampant corruption, sexual repression and religious fundamentalism plaguing contemporary Egyptian society. It also reflected the hopes of young Egyptians for a just society based on rule of law and respect for civil liberties. Like Egypt itself, the building in which the film’s lead characters reside had crumbled “from a once-elegant edifice of Art-Deco splendour now slowly decaying in the smog and bustle of downtown Cairo”, Nana Asfour, who works as a cultural editor for the New Yorker, wrote in a 2007 review of the book.

The book brings to life “a seedy and despicable Cairo where only the corrupted and corruptible can fare well” she wrote, adding that “in this scathing critique of contemporary Egyptian society, one is hard put to find a redeemable character”.

From Abdou and Busayna, who by necessity acquiesce to selling their bodies to feed their families, to Talal, who seeks solace in religion and later resorts to “martyrdom” — they all are victims of their merciless society. The film also portrays the fake religiosity widespread in today’s Egypt where many conceal their greed behind deceiving pious behaviour and appearances — like prominent lawyer Kamal El Fouli who rigs the parliamentary vote in favour of Hag Azzam, justifying the action as “implementation of God’s will”.

“Our Lord created the Egyptians to accept authority,” El Fouli tells Azzam in the film.

Shocking as it was to an audience previously unaccustomed to having the realities of their everyday lives mirrored so brazenly, the Yacoubian Building was a wake-up call to many Egyptians who were able to identify with the film’s characters. It was also the first in a series of films produced between 2005 and 2010 that were fiercely critical of society and which spurred Egyptians to rebel against the flagrant injustices within it.

Heya Fawda (“It’s Chaos”), an Egyptian-French 2007 co-production and the last film by internationally-acclaimed Egyptian director Youssef Shahin, meanwhile brought international attention to Egypt’s longstanding problem of police corruption and brutality when it was screened at that year’s Venice Film Festival. Police brutality was one of the main causes that triggered the 2011 uprising which aptly coincided with the country’s National Police Day. Set in Cairo’s populous district of Shoubra, the film shockingly depicts the brutal actions of a shady police officer, feared and loathed by the residents in his neighbourhood. So shocking was his brutality that it prompted some film critics to question whether the film was “serious or a lampoon”.

Khaled Youssef, who co-directed the film with Shahin, was later credited with having had the vision to foresee the coming political changes and for “stirring the still waters” with his films. The filmmaker and scriptwriter, who joined the pro-democracy activists in Tahrir Square during the 2011 uprising, would later reveal himself as a fierce opponent of the democratically elected Muslim Brotherhood regime, aligning himself closely with the military-backed authorities that replaced the ousted Morsi. His close links with the military have raised questions over whether his films were actually the outcome of his foresight or a premeditated and carefully calculated plan by the country’s security apparatus to topple Mubarak.

Youssef’s follow-up to Heya Fawda was another shocking revelation of the flagrant social injustice prevalent in modern-day Egyptian society. Set in a Cairo slum area, it depicts the daily struggles of the inhabitants of this deprived neighbourhood, including sexual violence against women and the plight of street children. The film ends with the residents of the slum rising up in arms to protest their conditions — which some observers viewed as a possible beckoning call on needy Egyptians to rise in similar fashion.

Last but not least, was the 90 minute comedy “The President’s Chef” released in 2010. In the film, a simple cook tries to convey to a president out of touch with his people, the hardships faced by average Egyptians in their daily lives. Film critics drew similarities between the film’s lead character and the real president who during the last ten years of his rule, had often been criticized for isolating himself in his own ivory tower, oblivious to the needs of his people.

In a country with a long tradition of strict censorship rules, one cannot help but wonder if the censors’ decision to pass those films was a coincidental loosening up of their tight restrictions in a bid to give a semblance of democracy and free speech. Or was it instead, a deliberate and tactical scheme to pave the way for Mubarak’s ouster?

Looking back at the events of the last three years that have ended with the return of the old regime minus Mubarak, it appears clear that nothing in Egypt happens by sheer coincidence.

This article was posted on 7 July 2014 at indexoncensorship.org