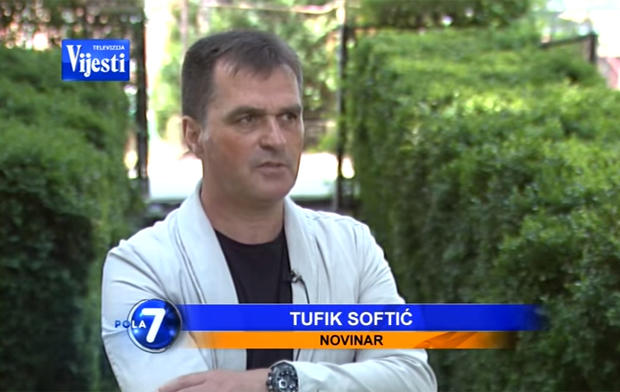 Seven years after the brutal attack that nearly took the life of journalist Tufik Softic, Montenegrin police detained two men suspected of involvement of his attempted murder. For media unions and observers, the detentions were long overdue, but emblematic of the atmosphere of impunity in Montenegro.

According to police, the men — VL and IA — were arrested in Budva on 17 July and charged with attempted murder in the 2007 attack on Softic, a reporter for the opposition daily newspaper Vijesti. After questioning by the state prosecutor, who confiscated their passports, the men were released the same day. Minister of Interior Rasko Konjevic also issued a statement on the case.

In November 2007, Softic was brutally beaten in front of his home by two hooded assailants wielding baseball bats. Then in August 2013, an explosive device was thrown into the yard of Softic’s family home. The journalist has been provided constant police security since February 2014.

OSCE Representative on Freedom of the Media Dunja Mijatovic welcomed the arrest of the two suspects for the attack on Softic. She also urged, “authorities of Montenegro to persist until all attacks on journalists, especially the murder of Dusko Jovanovic in 2004 are resolved and the perpetrators and masterminds are brought to justice”.

Journalists, the Media Union and NGOs emphasize that the atmosphere of impunity that has been created in Montenegro concerning attacks on journalists is the biggest threat to media freedom. The groups put the responsibility for the climate on authorities.

NGO Human Rights Action (HRA) highlighted the perilous state of journalism in their report Prosecution of Attacks on Journalists in Montenegro. The HRA outlined 30 cases of threats, violence and assassinations of journalists as well as attacks on media property between May 2004 and January 2014.

“Most of these attacks have not been clarified to date. In most cases certain patterns can be observed, for example: victims are the media or individuals willing to criticize the government or organized crime,” said the report.

One-third of all the incidents happened in the last year. For HRA, this is clear evidence that the atmosphere of impunity is escalating and inviting more attacks on journalists.

“Such an atmosphere of impunity threatens journalists in particular, who are often victims of unresolved attacks. If the state treats these attacks passively, it becomes responsible for the suppression of freedom of speech, the rule of law and democracy”, the group reported.

The European Parliament issued a resolution on the 2013 progress report on Montenegro expressed “grave concern about the increase in verbal and physical intimidation of journalists,” and “calls for all threats and attacks against journalists to be adequately investigated and prosecuted, including unresolved previous offences.”

UN Special Rapporteur on the promotion and protection of the right to freedom of opinion and expression, Frank La Rue, undertook an official visit to Montenegro from 11 to 17 June 2013. In the report that followed, he recommended that “the identification of responsibilities in all cases of violence and intimidation against journalists must be achieved without delay, so perpetrators are brought to justice.”

That police needed seven years to question any suspects in the brutal assault on Softic “could be used as an indicator of effectiveness and dedication of the police in resolving these cases”, underlined Marijana Camovic, chief of the Montenegrin Media Union.  “Yes”, she said, “we welcomed the detention of two suspects, but let’s have in mind that this is just one of the many cases that need to be resolved.”

For the Media Union, it is a common occurrence for criminals and people with political ties to threaten, berate and attack journalists. “Nowadays journalism is the most dangerous profession in Montenegro and that is why we need extra protection,” said Camovic.

Human Rights Action has proposed the introduction of two new and amendments to criminal offenses: “Grave types of murder” and “Serious bodily injury” with the aim of increased protection for journalists in performing professional duties. In the same manner, the Media Union is advocating for similar amendments so journalists could have protection under the law on a par with police officers.

In December 2013, the Montenegrin government established a commission for monitoring actions of authorities in the investigation of cases of attacks on journalists. As a result of their work, in January 2014, Dusko Markovic, a deputy prime minister and justice minister, was questioned because it was alleged that he withheld information on the murder of Dusko Jovanovic, the editor-in-chief of the opposition newspaper Dan, in 2004.  Montenegrin media reported that Markovic was the head of the secret service at the time.

More reports from Montenegro via mediafreedom.ushahidi.com

This article was posted on July 25, 2014 at indexoncensorship.org